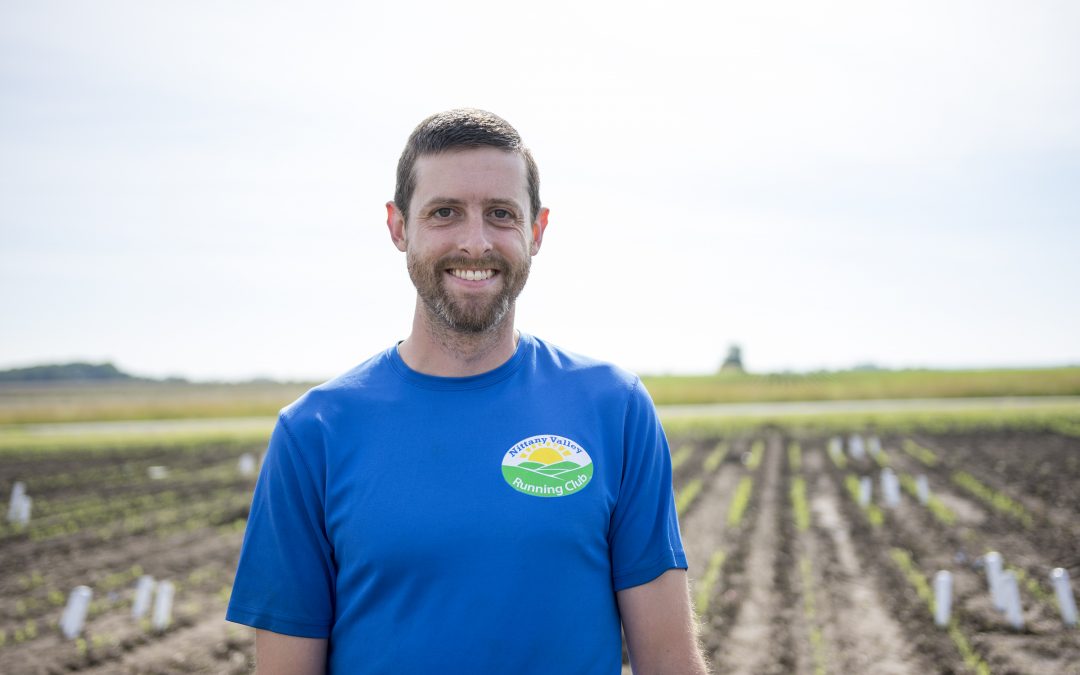 Growing up in a rural town in Western Massachusetts led CABBI Postdoc Mark Burnham to become more than just an outdoorsy person.

“I spent a lot of time outside, which is how I got interested in environmental goals and biology,” he said.

Burnham’s love for nature began in his childhood but quickly transitioned into adult life. After graduating with a B.S. in Biology, with a focus on Forest Ecology, Burnham attended Pennsylvania State University for his M.S.

It didn’t take long for Burnham to find his way back to forest ecology. While attending West Virginia University, a CABBI partner institution, his Ph.D. work focused on nitrogen cycling in forested watersheds, specifically within central Appalachia. 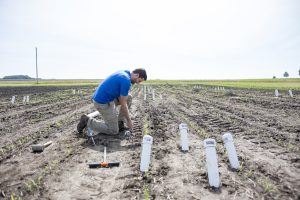 Burnham prepping to collect water samples at the University of Illinois’ Energy Farm.

“I was looking at how trees use and influence the nitrogen that is in watersheds, specifically in stream water,” he said. “I also looked at nitrogen in acid rain, which is how I got into ecosystem nitrogen cycling and soil work.”

Burnham’s work with a stable nitrogen isotope (N15), which is commonly used as a tracer of various processes in the soil, helped him transition to Wendy Yang’s lab in CABBI’s Sustainability theme at the University of Illinois at Urbana-Champaign.

Burnham continues to work with nitrogen cycling at Illinois, but within CABBI his work has taken a greater focus on how bioenergy crops can influence the processes that create nitrate or nitrous oxide. These processes lead into assessing the sustainability of bioenergy crops.

A lot of Burnham’s day-to-day work revolves around planning experiments, collecting soil samples, testing them in labs, and analyzing data. All the while, the team is constantly preparing for the next season.

After the American Geophysical Union, an annual conference each December, team members take what they’ve learned from their various analyses and interactions with other researchers to start asking the questions that will drive experiments in the following season.

Burnham tends to work with a variety of other researchers, both inside and outside of his home base.

“I worked last year up at Iowa State with a couple of professors,” Burnham said. “Eddie Brzostek, at West Virginia University, was a professor I knew when I was a Ph.D. student. Adam (von Haden) and I both work with him closely to make sure we’re taking effective measurements that are useful for the ecosystem process models. I’ve worked with a pretty good number of other CABBI people.”

Yang’s team works primarily with sorghum — a grain typically grown for feed and fuel. The plant has a unique ability to release compounds from its roots that can change nitrification (the production of nitrate).

“Last year was the strongest result where we detected nitrification inhibition in the soil in a field setting. We also found that when you add nitrogen that effect declines,” Burnham said. “It looks like it’s a mechanism that the plant deploys to maintain nitrogen in the soil and to increase its own nitrogen nutrition.

“So, if you add nitrogen, then it doesn’t put energy into those compounds to retain that nitrogen (because it already has plenty). Meaning it looks like an active response we can detect in the field.” 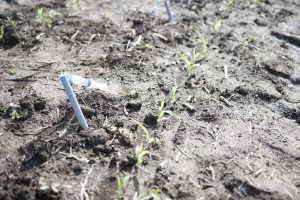 Sample collection at the University of Illinois’ Energy Farm.

Team members are beginning to look at how this nitrification inhibition could influence the overall budget of nitrogen in a sorghum field versus a corn field.

Sorghum has the potential to substitute corn, currently the major crop used for ethanol production. Sorghum generously produces biomass and oils that can be transformed into fuels, but its sustainability must be put to the test first.

Beyond assessing the viability of this crop as the new annual bioenergy crop, CABBI, with the assistance of postdocs like Burnham, are adding valuable information to the overall scientific community.

“Belowground processes are hard to measure and they’re so complex that we still don’t have a strong understanding of these processes,” he said. “Even though we’ve known they’ve existed for decades, learning about the actual processes with the project is definitely a benefit to the larger scientific community.”

Adding to that greater scientific community has always been a goal of Burnham’s, along with teaching.

“It’s great that researchers are super invested in their work, but it’s easy to forget the primary role of the university in undergraduate education,” he said. “I hope to use research to educate students about how science works and to get them to think like a scientist in their everyday lives.”

But in the meantime, if he’s not in the lab, you’ll continue to find Burnham outside.

Whether collecting data from the field or taking his retired racing greyhound out to local parks, Burnham will always have a strong connection with nature. One could easily describe him as an “amateur naturalist.”