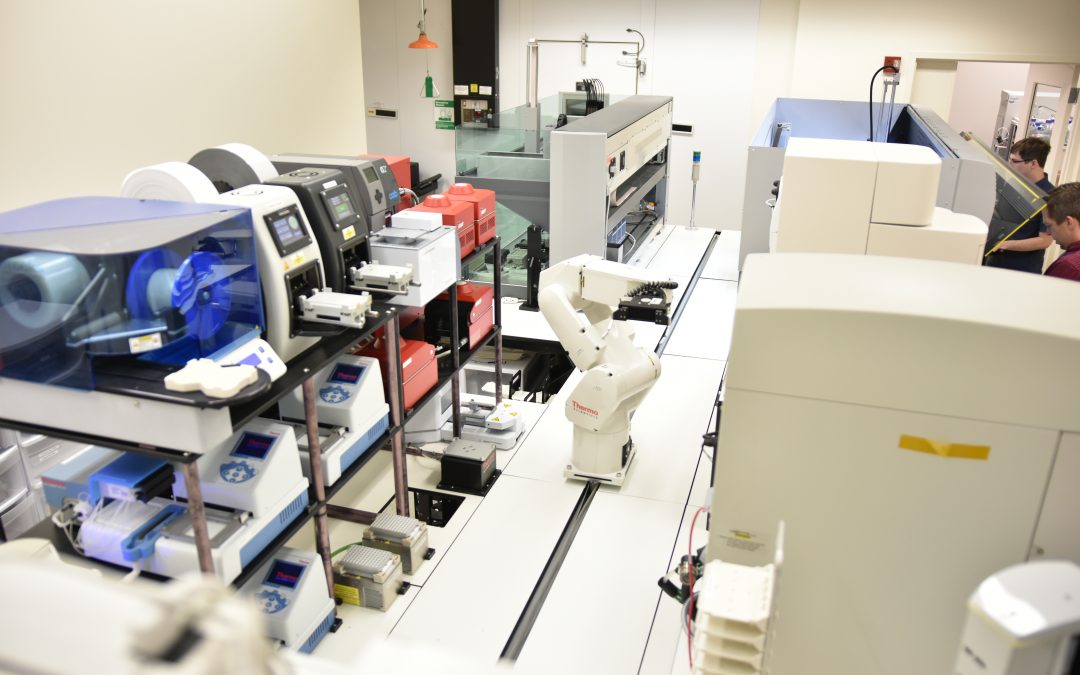 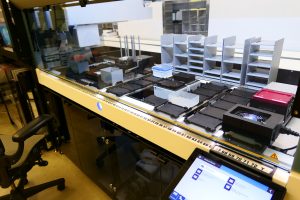 Across the University of Illinois campus — and at countless other research universities and institutes — biologists toil away at their lab benches, working on tedious tasks such as DNA assembly and microbe engineering.

In the concourse research lab in the Carl R. Woese Institute for Genomic Biology (IGB), however, researchers are taking a different approach. A robotic system deftly moves sample plates between pieces of lab equipment with little help from the lab’s researchers. This system does the same tasks that scientists often have to do by hand. It’s a one-of-a-kind “living foundry.”

The Illinois Biological Foundry for Advanced Biomanufacturing, or iBioFAB for short, is a platform for automatic production and analysis of synthetic biological systems. It plays an integral role in supporting the research goals of the Conversion theme of the Center for Advanced Bioenergy and Bioproducts Innovation (CABBI).

The iBioFAB was originally built in 2014, and it’s been evolving ever since. Like Facebook or Windows, the researchers and programmers who work on the iBioFAB technology are always implementing new iterations and upgrades — the system is never static.

The iBioFAB is used to automate much of the research that’s done in IGB. Beyond that, it’s also a resource for other labs around campus and beyond. It can perform tedious research tasks, which brings in revenue for the iBioFAB team and saves money for the labs. 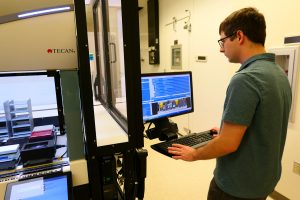 “For the most part, we’ve been a research group, but we’re hoping to transfer to more of a service-based operation,” said Stephan Lane, the manager of the iBioFAB. “Other labs can contract us to do work for them, like DNA assembly. Most people who work in biology are at some point going to need DNA assembly, so they can just outsource to us for a small fee.”

The iBioFAB uses standard lab equipment that you’d find in a biology lab, except it’s set up to work with the robot. A central arm can move sample plates between the different equipment, and another arm can pipette 96 samples at a time.

The iBioFAB is such a massive step up from the way researchers have always done synthetic biology because the automation greatly cuts down on the time necessary to do tasks that would otherwise be precise and repetitive to do by hand. 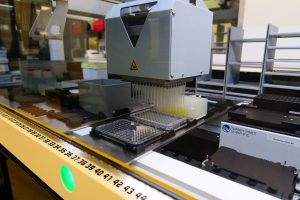 “You can do the same things people do by hand, but on the scale of thousands, rather than people doing a couple a day,” Lane explained.

In addition to drastically cutting down the amount of time required for some research tasks, the iBioFAB reduces the likelihood of human error. Any errors in the final product typically can be easily traced back to their source, due to the system’s automation.

That’s not to say that this type of automation will remove the researcher from the research. Rather, it allows researchers to focus more of their time on experimental design.

The iBioFAB also facilitates the need for programmers in the lab. Programmers are tasked with creating and improving the protocols that tell the robot what to do, an intensive task for a system with this level of automation. The iBioFAB research group is looking to hire more programmers, which will allow them to further develop the iBioFAB’s capabilities.

“This is the future of biology,” Lane said. “It’s sort of like how 150 years ago, people farming by hand started using machinery. In 100 years from now, this is how all biology research is going to be.

“For people who are interested in this sort of thing, now’s the time to get involved. There are countless pharmaceutical companies and biotechnology companies out there that are looking for people with experience in this. And the iBioFAB is one of only a handful of automated synthetic biology research systems in the world. The demand for this skill is exploding.”

As the field of synthetic biology continues to evolve, lab groups like the iBioFAB team are finding ways to revolutionize research.

“We’re also thinking of an app for plasmid assembly,” he said. “People could input their sequences, drag and drop different parts to build it on their screen, press go, and then the iBioFAB will physically build the plasmids for you. If you’re trying to get hundreds or thousands of plasmids, we’re the place to go.”

Check out the iBioFAB at work:

In 2019, Nature Communications published a paper by Conversion Theme Leader Huimin Zhao and others on the capabilities of the iBioFAB. Read it >>>