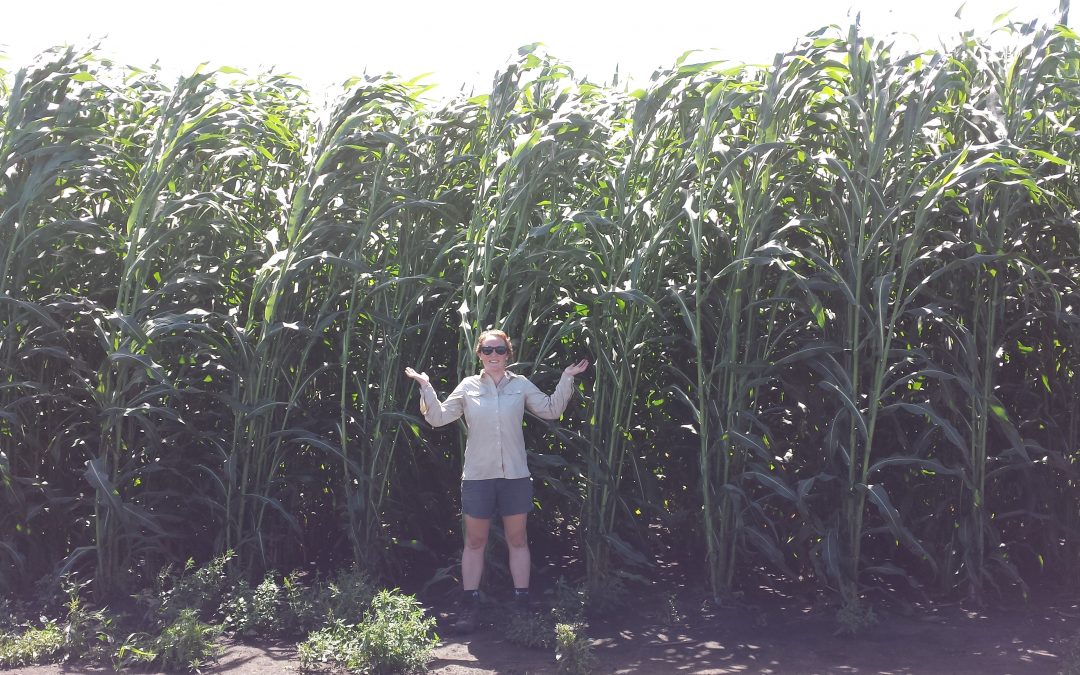 Large perennial grasses like miscanthus are a primary target for use as bioenergy crops because of their sustainability advantages, but they take several years to establish and aren’t ideal for crop rotation. Maize and other annual crops are easier to manage with traditional farming, but they are tougher on the environment.

Energy sorghum, a hefty annual plant with the ecological benefits of a perennial, may combine the best of both crops.

A study by researchers at the U.S. Department of Energy (DOE) Center for Advanced Bioenergy and Bioproducts Innovation (CABBI) found that energy sorghum (Sorghum bicolor) behaves more like miscanthus in the way it efficiently captures light and uses water to produce abundant biomass. It has higher nitrogen emissions like maize, but researchers believe careful fertilizer management could reduce those levels.

The study, published in Global Change Biology Bioenergy, offers an important first look at how energy sorghum compares to maize and miscanthus grown in the Midwest, providing critical data for biogeochemical and ecological models used to forecast crop growth, productivity, and sustainability. The study was led by former CABBI Postdoctoral Researcher Caitlin Moore and her advisor, Carl Bernacchi, Plant Physiologist with the U.S. Department of Agriculture’s Agricultural Research Service and Adjunct Professor of Plant Biology and Crop Sciences at the University of Illinois Urbana-Champaign.

Sorghum appears to be a “middle-road crop,” with an annual growth cycle but the ability to use much less water than maize to produce “a ton” of biomass, said Moore, now a Research Fellow at the University of Western Australia’s School of Agriculture and Environment. “It certainly holds promise as a crop that supports the bioenergy economy.” 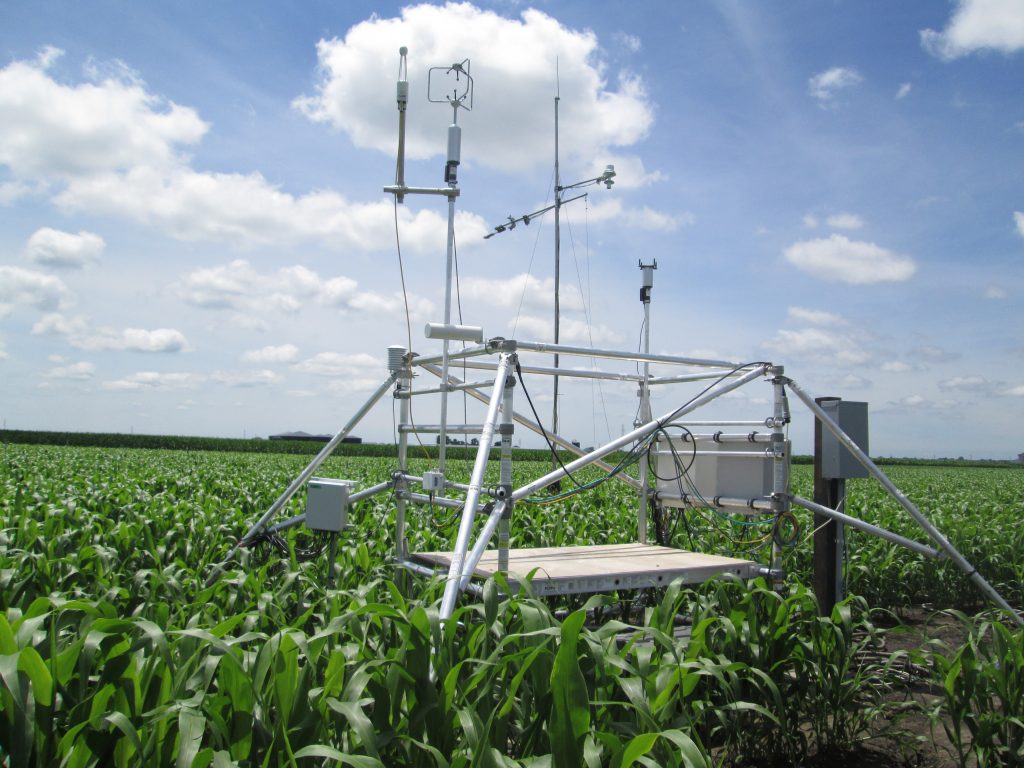 The researchers conducted ecosystem-scale comparisons of carbon, nitrogen, water, and energy fluxes of Sorghum bicolor with maize and Miscanthus x. giganteus at the Illinois Energy Farm during the 2018 growing season, a near-average year in terms of temperature, rainfall, and soil moisture. The fluxes reflect “the breathing of the ecosystem” — how water, carbon dioxide (CO2), nitrogen (N), and energy move between plants and the atmosphere, Moore said.

The long-term ecological sustainability of bioenergy crops depends on how well the system “breathes.” An ideal crop would use water and light efficiently to maximize the amount of biomass, keep carbon in the soil instead of releasing it into the atmosphere, and require little nitrogen fertilizer, which can leach into water or react with soil to produce nitrous oxide (N2O), a potent greenhouse gas.

Miscanthus and other large perennials offer the best option for biomass production and carbon sequestration, as they feature extensive underground systems for storing carbon and nitrogen and require less fertilizer than annual crops. But those benefits can be negated if the carbon and nitrogen are disturbed as the land is converted to other uses, as with crop rotation. That could make it difficult for land managers to rotate between food and fuel crops to keep up with market demands while still maximizing long-term carbon storage.

Maize, on the other hand, is highly productive but requires a great deal of water and nitrogen, and it loses carbon stored in its ecosystem through harvesting and tilling.

Energy sorghum falls somewhere in between. As an annual, it can be easily rotated with other crops like soybeans and maize. It’s photoperiod-sensitive, so it produces generous yields of biomass late into the season when grown in regions with long days. And because it is drought-tolerant, energy sorghum can be grown in low-rainfall regions, alleviating the pressure a growing biofuel industry could place on existing land used for food production.

The question, before this study, was whether energy sorghum behaved more like miscanthus or maize, and what that meant for the ecosystem. The CABBI team used eddy covariance flux towers and below-ground soil readings to record data on the plants’ ecosystems – everything from wind speed and turbulence to air temperatures, atmospheric gases, humidity, and soil moisture. They also measured energy exchange by looking at “albedo,” a measure of surface reflectivity. In the heat of summer, plants evapotranspire, which releases moisture and excess energy into the air; leaves with high reflectivity don’t take on as much heat and energy.

Researchers found that during the peak growing season in July — when all three crops were at their maximum productive potential — carbon, water, and energy fluxes from the sorghum ecosystem were more similar to those from the miscanthus ecosystem, whereas its nitrogen fluxes more closely resembled maize.

Maize had the highest productivity but also the highest evapotranspiration, with energy sorghum and miscanthus more closely aligned. Overall, energy sorghum had the highest water use efficiency. Maize was the most efficient at turning light into biomass through photosynthesis, with miscanthus on the low end and sorghum in the middle — probably because the latter two plants have leafy, dense canopies while maize is grown in rows to maximize light penetration, Moore said.

The N2O flux was higher from maize and energy sorghum compared to miscanthus. The researchers concluded that they likely used too much fertilizer on the sorghum, even though it received half the amount as maize. June rains that waterlogged the low-lying sorghum fields might have exacerbated nitrogen losses. The scientists suspect that sorghum has a much lower need for nitrogen, akin to miscanthus.

Continued observations of fluxes for the three crops will be an important next step for comparing their responses to drought, floods, and other extreme climate events and assessing year-to-year biogeochemical differences. A detailed understanding of the interaction between crop type, climate, and management will be critical for forecasting the long-term sustainability of these key bioenergy crops, which will play an important role in ensuring the U.S. meets the 2050 cellulosic bioenergy requirements mandated in the Energy Independence and Security Act of 2007, the study said.