Agronomist Emily Heaton has been part of CABBI from the start as a Sustainability researcher at Iowa State University. Now back at the University of Illinois Urbana-Champaign — her alma mater and research training ground — Heaton has taken over leadership of CABBI’s Feedstock Production Theme, succeeding Center Director Andrew Leakey.

The job pulls together her interests in not only developing productive bioenergy crops but assessing their impact on the environment, the economy, and agriculture — a passion cultivated on her family farm near Monticello, Ill. In this Q&A, Heaton talks about her background, the importance of integrating CABBI’s research, and the Illinois Regenerative Agriculture Initiative launched this spring.

What made you decide to take on your new role as head of the Feedstock Production theme?

The short answer is it was an amazing opportunity, with amazing people. While it is certainly a bit intimidating to lead the caliber of scientists involved in the Feedstocks theme, the science was too exciting to resist, and I have a huge amount of trust in the CABBI leadership. The theme members have been incredibly welcoming and supportive. Anything I can do to advance their work, and meld it with those of the other themes, is a gift. 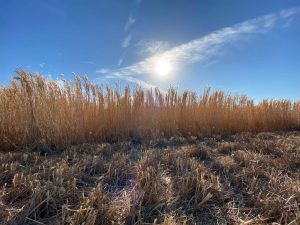 Above: A miscanthus stand during the harvest at Emily Heaton’s family farm near Monticello, Ill. Top: Heaton helps install a lysimeter for water quality measurements at Iowa State University’s Sorenson Farm near Boone, Iowa, in 2019.

How will you blend your two CABBI roles? Will you provide a bridge for research in the two themes?

I think of Feedstock Production and Sustainability as already blended. I hope my research will continue to be a bridge between the two because Feedstocks is all about making good crops even better, and Sustainability is about testing and understanding what “better” actually means when the crop is grown on the landscape. For me, integration between the themes feels logical because I have been doing this kind of work since we planted the first giant miscanthus trials in Illinois during my graduate work in 2002. I remember looking at those big, beautiful plants and wondering, “How much water do plants this big use? What if planting them widely will cause problems with stream flow?” I wanted to have answers to those questions to give to farmers and policy makers. The sustainability theme answers such questions using ecosystem measurements and models. Today I am curious to know how the sweet, greasy grasses we are making in CABBI will affect soil microbial communities. Together, Feedstocks and Sustainability will provide the answers.

You are one of CABBI’s first “integration” Principal Investigators. Why is that important?

Happily, integration has been a major focus of CABBI since the beginning. Until recently, though, we have had a focus on earlier-career integration appointments, such as postdocs.

It’s vital that we recognize and support the integrative nature of our research because bioenergy crops aren’t growing in a vacuum. They are part of existing cropping systems, existing fuel systems, existing economic systems. And importantly, agriculture is fundamentally a human-driven enterprise. Just like microbes mediate nutrient flow in ecosystems, people mediate agricultural production and markets. I love that CABBI fundamentally integrates human dimensions into our economic and life cycle assessments to recognize the integrative facets of agriculture and energy systems.

VIDEO: Click here for Heaton’s thoughts on the role of diversity in CABBI and research in general.

What breakthroughs are on the horizon for Feedstock Production as CABBI moves through Year 4 and Year 5?

There is a lot of exciting stuff happening in the Feedstocks theme. In Years 4 and 5, we’re going to build on the success of the Oilcane 1.0 demonstration pipeline that we had last year. That was a huge success in terms of bringing the CABBI Feedstocks theme members together and demonstrating the proof of concept of our research. We are especially excited that Dan Voytas has joined CABBI to help us revolutionize introduction of new traits to CABBI crops using viruses instead cell cultures, thus allowing us to test and learn much faster. 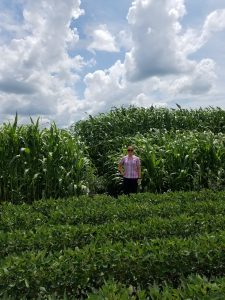 Heaton stands amid several sorghum varieties, with soybeans in the foreground, at Iowa State.

Will you be continuing your sustainability research in Iowa or working in Illinois?

In the next year, I will transition and connect my research in Iowa to new projects ramping up in Illinois. It’s been very exciting to see what we can do with multiple testing locations for our crops. For example, within CABBI we have a few big field locations: one in Illinois, one in Iowa, and one in Florida. At first we thought the Illinois hub and the Iowa hub might be very similar since they’re both in the Corn Belt, with similar soils and weather, but what we’ve learned is that even though the regions are similar we don’t always get the same results, and with the CABBI infrastructure we can actually figure out why.

A big part of CABBI is understanding the science that underpins our observations. What are the mechanisms that drive our observations? Sometimes we can develop the wrong conclusions about those mechanisms if we don’t have another place to test them.

Can you talk about a case where you found very different results in Iowa and Illinois?

The growth of miscanthus in Illinois has been very different from the growth of miscanthus in Iowa. In Iowa we’ve had faster uptake of carbon from a miscanthus stand than we did in Illinois — that is, the amount of carbon the crop was taking out of the air and putting into the ground was higher in early years at the Iowa site than what we’d anticipated based on the Illinois data. So that has different implications when we think about how to value a crop like miscanthus in a carbon market or how we think about its greenhouse gas impact in a changing climate.

Another example is with the energy crop sorghum, an annual CABBI crop. We’re seeing different responses of ecosystem respiration — that is, how much CO2 comes out of soil microorganisms — under sorghum in Illinois than we are in Iowa, and we’re not quite sure why yet. So here’s a case where we have a chance to look at a divergent response and identify the mechanism that drives that response in both locations. To me that’s the exciting part of the science. Instead of saying, “Huh that’s weird,” we can dig in and say, “Why is that weird? What’s driving this observed phenomenon?”

How is your CABBI research tied to your work with the new Illinois Regenerative Agriculture Initiative?

To me, biomass crops are one part of a larger regenerative agricultural portfolio. Regenerative agriculture is about getting out more than you put into the system, by working with natural processes instead of trying to negate them. For example, in CABBI we are developing crops that use and cycle nutrients synergistically with soil microbes, instead of dumping synthetic fertilizer on the crop and ignoring the nutrients that healthy soils can provide to support its growth. Biomass crops like those we are making in CABBI can also be used for a variety of non-energy products — for example, animal bedding and compostable packaging — as well as for ecosystem services that are increasingly valued, like water protection, carbon capture, and soil improvement. 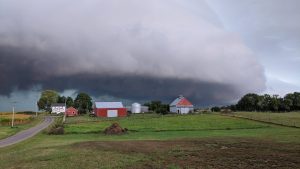 How does it feel to be back home on your family farm? Are you still actively involved in the farm operations?

Our farm is just outside Monticello, Ill., and it typifies an early prototype of regenerative agriculture with biomass crops. We have about 30 acres of grassland that we use to harvest sunlight for a variety of purposes. We have pasture that is used to graze heritage poultry (turkeys and geese), cattle, and sheep. We planted the first commercial stand of miscanthus in 2002, based on my grad experience. Now we use it for bedding for the turkeys, then use the spent litter as mulch for the vegetable gardens. We sell our meat directly to customers and a few Chicago-area restaurants. 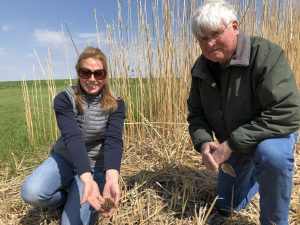 Heaton checks out the soil with her father, John Caveny, on the family farm. All credits: Emily Heaton

It’s a small farm, but keeps us busy and supports a high quality of life. We now have three generations living and working on the farm. My dad, John Caveny, is still heavily involved, but he officially transitioned management to my sister, Betsy Barnick, two years ago. She and her family built a new house on the original farmstead and together our sons do much of the day-to-day operations and maintenance. The farm has sort of been my training ground, and now it continues to be my testing ground for ideas and for finding new relationships between ideas and their outcome. I can’t wait until we can have a CABBI retreat event and show you around!

VIDEO: Click here to learn more about the Caveny farm and the impact it had on Heaton’s career.