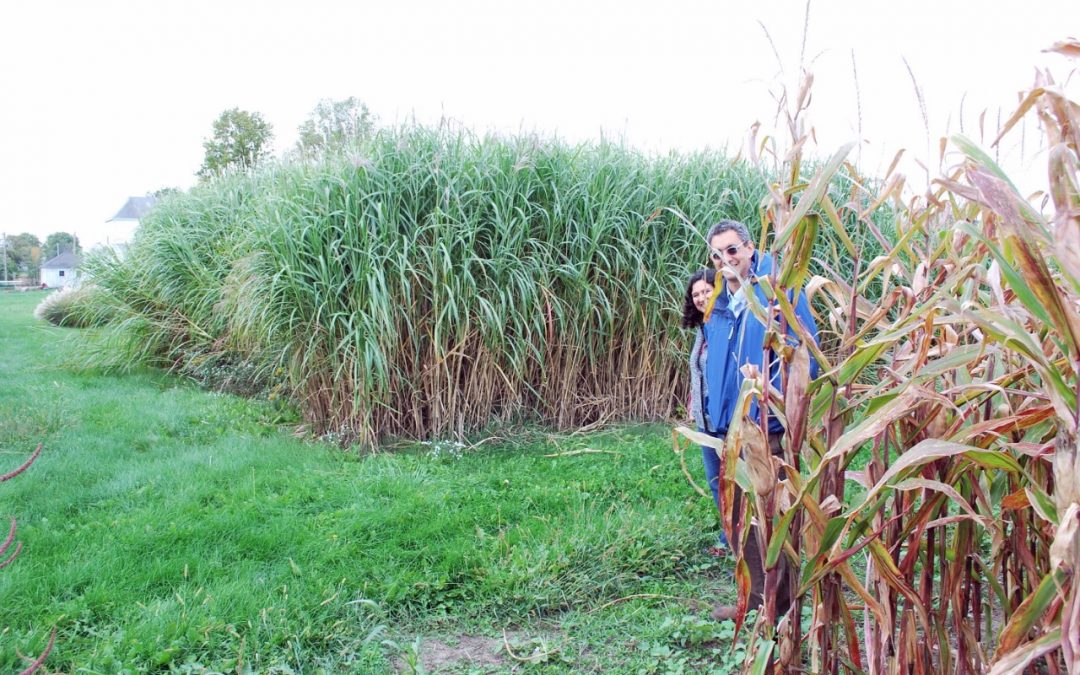 ­An international research team has sequenced the full genome of an ornamental variety of miscanthus, a wild perennial grass emerging as a prime candidate for sustainable bioenergy crops.

The genome project — led by scientists at the Center for Advanced Bioenergy and Bioproducts Innovation (CABBI), a U.S. Department of Energy (DOE) Bioenergy Research Center — provides a road map for researchers exploring new avenues to maximize the plant’s productivity and decipher the genetic basis for its desirable traits.

The study, published in Nature Communications, was supervised by CABBI researchers Daniel Rokhsar, Professor in the Department of Molecular and Cell Biology at the University of California (UC), Berkeley; and Kankshita Swaminathan, Faculty Investigator at HudsonAlpha Institute for Biotechnology, Huntsville, Ala. The team, which included more than 40 collaborators, was led by Therese Mitros, Adam Session, and Guohong Albert Wu from Rokhsar’s lab; and Brandon James from Swaminathan’s lab. Mitros and James are CABBI researchers, and Session and Wu are affiliated with the DOE Joint Genome Institute (JGI), a DOE Office of Science user facility at Lawrence Berkeley National Laboratory (Berkeley Lab).

Miscanthus grasses, also used in gardens, paper production, and roofing, are a promising source of biomass, a renewable alternative to petroleum-based fossil fuels. They belong to the Andropogoneae family of grasses, which includes maize, sorghum, and sugarcane — highly productive and globally important plants grown as a source of food, feed, and biofuels.

Miscanthus is extremely adaptable and easy to grow. It can thrive on marginal lands, requires only limited fertilization, has a high tolerance for drought and cool temperatures, and uses the more efficient C4 form of photosynthesis.

The CABBI team’s sequence and genomic analysis of Miscanthus sinensis — the first for any type of miscanthus — provide a foundation for systematic improvements to optimize those desirable traits. The project also produced an atlas of genes that are turned on and off in different parts of the plant during its seasonal life cycle, revealing new regulators of perenniality, a desirable trait for biofuel and other crops.

“The genomic toolkit we have assembled for miscanthus will be a valuable resource for researchers studying this plant and breeding it to improve biomass and other traits,” Swaminathan said. “By comparing miscanthus with sorghum, sugarcane, and other related grasses, researchers within CABBI and beyond hope to decipher the genetic basis for innovations linked to productivity and adaptability.”

The study relied on extensive field collections over several growing seasons at the University of Illinois that captured the plant’s full life cycle. Led by Swaminathan, scientists measured gene expression in the leaves, stems, and rhizome (the underground part of the stem). The catalog of tissue-preferred genes will provide clues for how to genetically modify the plant to improve certain processes, said Mitros, who led the computational work on genome assembly, annotation, and sequence analysis.

The study also revealed a group of genes involved in the all-important nutrient remobilization cycle. In the fall, as the plant’s leaves die, nitrogen and other nutrients are sent to the rhizome, where they are stored underground over the winter; in the spring, that energy is taken up into other tissues as the plant grows instead of going back into the soil, reducing the need for fertilizer. The rhizomes also produce new stems, allowing the plant to get bigger every year, and help with carbon storage. All of that makes miscanthus more sustainable — less costly to manage and more environmentally friendly.

Many M. sinensis lines are used as decorative grasses and grow both from the rhizome and from seed. The grass with bioenergy potential, Miscanthus x giganteus “Illinois” type, doesn’t create viable seed and is thus more difficult to propagate. CABBI researchers like Erik Sacks, Associate Professor of Crop Sciences at Illinois, are working on new hybrids, crossing M. sinensis and M. sacchariflorus to create multiple giganteus varieties that would be more adaptable to different regions and produce seeds.

The genetic sequence is a platform to understand the variations within all kinds of miscanthus varieties, Rokhsar said. Miscanthus hybrids have evolved naturally in Asia, and Sacks and other breeders hope to combine the best of the populations to create varieties best suited for particular locations.

On a fundamental level, the study will help scientists tease out answers to basic questions about plant biology, such as the circuits involved in the rhizome nutrient cycle, how it works through the seasons, and how it evolved. And it will give them more information about the rules for crossing and combining miscanthus so they can produce optimal hybrids, Rokhsar said.

“The types of data presented in this study are also critical to deploy techniques like gene-editing to help decipher the function of the genes that control traits and adaptations important to the success of this high-yielding grass,” Swaminathan said.

For example, the gene expression data point to a suite of genes that may be involved in the ability of miscanthus to store energy in a modified underground stem (the rhizome) over winter and bounce back each year bigger than before. Swaminathan is intrigued by what makes a stem become a storage organ in Andropogoneae grasses; she wants to understand the molecular mechanisms that direct the miscanthus rhizome to store complex carbohydrates while sugarcane and sweet sorghum stems store sugar.

Miscanthus and other plants have complex genomes, with a history of more genomic duplication than seen in animals. Having multiple copies of chromosomes allows for larger plants and more genetic diversity while providing more targets for genetic engineers. But it also made the sequencing and assembly a challenge, Rokhsar said. “We drew on lots of different technologies to make that happen.” 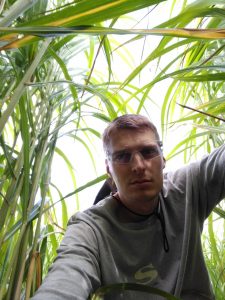 Above: Brandon James, CABBI Postdoctoral Researcher at HudsonAlpha Institute, with a miscanthus crop at the University of Illinois Urbana-Champaign’s Energy Farm. Top: CABBI investigators Daniel Rokhsar and Kankshita Swaminathan stand in front of miscanthus at CABBI’s SoyFACE Facility at the U of I. Credits; Brandon James, Stephen Moose

The team’s analysis determined that miscanthus is a “paleo-allotetraploid,” meaning it arose by ancient hybridization of two ancestral species, rather than by doubling within a single species as happened in sugarcane. The two progenitors of miscanthus are long-extinct — dying out after the hybridization about 2 million years ago — but their chromosomes live on in miscanthus. Session used computational analyses to figure out the ancient origins of each chromosome and identify segments that have swapped chromosomes. He also teased apart subtle differences in the way the two chromosome sets have evolved since the duplication — vital information for genetic engineers who want to knock out particular genes, Mitros said.

The paper is the culmination of a multi-year, interdisciplinary effort to sequence a miscanthus genome involving dozens of researchers in the U.S., Europe, and Asia. It is built on the work of scientists like Sacks, who has collected germplasm from thousands of lines of miscanthus in Japan, Korea, and other countries.

Other instrumental researchers included Professors Stephen Moose and Matthew Hudson, University of Illinois crop scientists who were involved in the genome project when it was under the auspices of the Energy Biosciences Institute, a BP-funded initiative at Illinois, UC Berkeley and Berkeley Lab. Professor Stephen Long, another U of I crop scientist, had been among the first to propose miscanthus as the basis for a new biofuel economy as part of a scientific team at the College of Agricultural, Consumer and Environmental Sciences. Moose led EBI’s feedstocks group and pioneered the genomics work, producing chromosome maps of M. sinensis and early gene expression data sets for multiple Miscanthus lines. The JGI carried out much of the genome sequencing under the supervision of Rokhsar, who was also part of the original EBI project and has a long-standing interest in complex plant and animal genomes.

Swaminathan was a scientist on Moose’s team during the EBI project. The team, which included Rokhsar and Mitros, started by trying to decipher the M. x giganteus Illinois genome, but “it was a jigsaw puzzle not coming together,” she said. The researchers realized that M. x giganteus was too complicated, and turned to a double-haploid line of M. sinensis generated by Katarzyna Glowacka, then a graduate student in Poland and now a faculty member at the University of Nebraska. Using the best available data at the time, they put together a fragmented genome assembly. Swaminathan joined HudsonAlpha in 2016, bringing a freezer full of samples with her, and both James and fellow Postdoc Mohammad Belaffif started processing samples and analyzing the data.

CABBI was formed in 2017 and took on the genome project. Mitros pulled together the genomic analysis. Swaminathan’s team focused on gene expression, and Sacks contributed data from his diversity collections. Researchers in Europe shared genotype data and information on the M. sacchariflorus genome, and the project grew.

“It took that concerted effort, with someone at the center pulling all the data together to make sense of it,” Swaminathan said. “This would have just not happened without CABBI.”