University of Illinois iGEM Team: Cleaning up our Crops 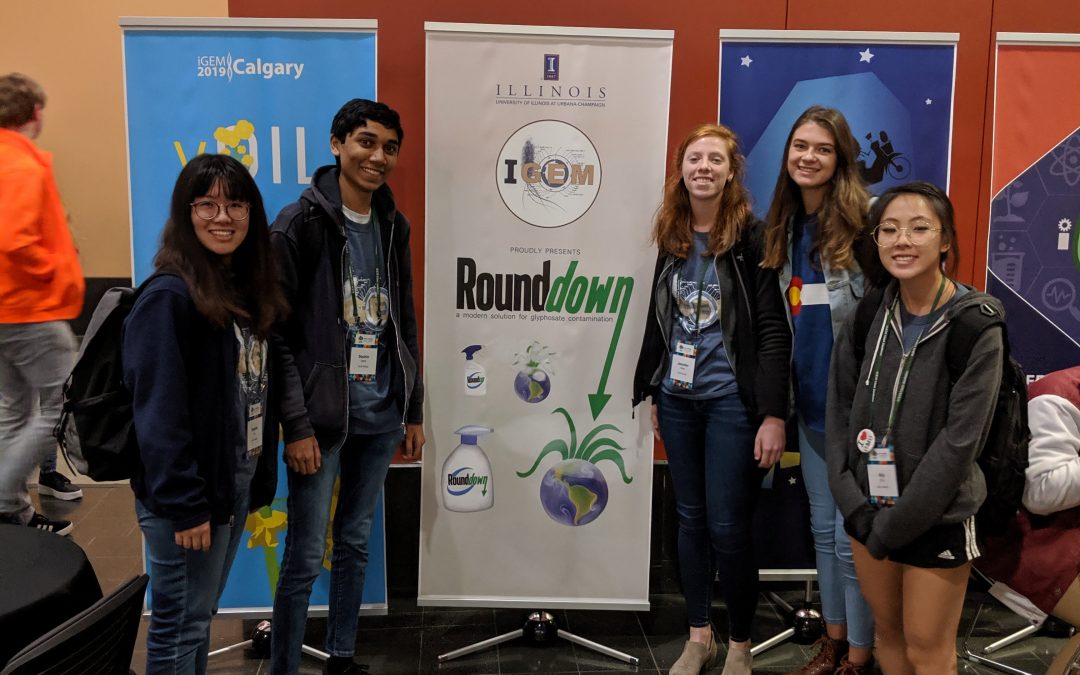 Herbicides are an integral component of modern farming. However, glyphosate, the most widely used herbicide in the United States and the main ingredient in formulations like Roundup™, has recently been classified as a probable carcinogen by the International Agency for Research on Cancer (IARC).

As of 2016, Illinois alone was responsible for 8.56% of the total volume of glyphosate applied in the U.S. That’s a lot to clean up.

Enter the University of Illinois’ iGEM team. A group of five undergraduate students — guided by several researchers at CABBI and the Carl R. Woese Institute for Genomic Biology — spent the summer researching a solution for the Midwest’s glyphosate problem. 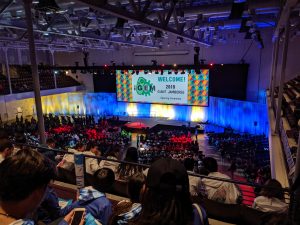 The iGEM Jamboree was held this fall in Boston, Mass.

iGEM (which stands for International Genetically Engineered Machine) is a worldwide synthetic biology competition. Every year, teams from across the globe design their own summer research projects and present their work in the fall at the “iGEM Jamboree” conference in Boston.

Inspired by the plentiful crops surrounding campus, the U of I iGEM team chose to research how glyphosate can be degraded into nontoxic components. They focused on glyphosate degradation in bodies of water, as there are few aquatic microorganisms that can naturally degrade it.

They based their project around the degradation pathway found in Pseudomonas pseudomallei 22, a bacterium naturally found in the soil. These bacteria have two genes, glpA and glpB, which enable them to tolerate glyphosate and break its C-N bond, resulting in the formation of AMPA.

The team cloned these genes into E. coli, allowing these water-tolerant bacteria to degrade glyphosate into AMPA. From there, a C-P lyase that’s native to E. coli can further break down AMPA into phosphorus and methylamine.

As their aim is to break down the most dangerous component of Roundup™, the iGEM team aptly decided to name their modified E. coli  “Rounddown”.

The freedom to design a project like this afforded learning opportunities for the team’s undergraduates and mentors alike.

“I learned a lot of things that I wouldn’t have learned if I was in a normal lab,” said Sachin Jajoo, a member of the iGEM team and a junior in molecular and cellular biology. “In most labs, you’re just focused on doing one part of a project, but here, we did a whole experiment, so we got to do a little bit of everything.”

Said Matthew Waugh, an iGEM mentor and CABBI Conversion Postdoc: “It was like running a small lab group of my own, which was probably the most rewarding experience for me. Learning and experiencing the role of a PI contributing intellectual work, as opposed to bench work, and managing a team of researchers was really exciting and valuable in reflecting on my own work and role as a researcher and mentor.”

Like any ambitious synthetic biology project, however, the team encountered its fair share of bumps along the road. 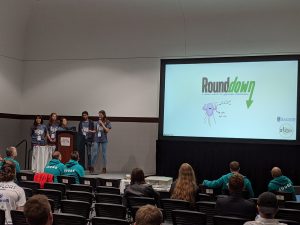 Illinois iGEM team members received a silver medal this year in recognition of their project.

“When something went wrong, we would troubleshoot and debate what the issue might be,” Waugh said. “Even I don’t always have the answer as to why something would fail, so working with the team through those challenges and finding creative solutions to them in a way that included the students in the process was what I spent most of my time doing.”

Despite the challenges, the Illinois iGEM team had results to present at the iGEM Jamboree. For some of the team’s members, it was their first time presenting research at a scientific conference.

Rounddown was shown to be able to grow in solutions containing Roundup™ — something that the unmodified control E. coli struggled to do. However, the team’s preliminary tests indicate that Rounddown does not degrade glyphosate. They speculate that this might have happened because the Rounddown samples were not allowed to grow for a long enough period of time, or perhaps because their method of detecting glyphosate concentration may have been unable to differentiate between glyphosate and its degradation product, AMPA.

Team members plan to gather further quantification data in the future. This will help them more accurately identify Rounddown’s ability to degrade glyphosate. They also note that further work could be done to clone glpA and glpB into bacteria native to soil, which could be a useful tool for future bioremediation.

“After finishing the project and competition, hopefully some of the students may think this area is interesting enough to warrant further study!” said Carl Schultz, one of the iGEM team’s mentors and a Ph.D. Candidate at IGB. “And whether they do or not, they’ll certainly know much more about it and will be able to pass that knowledge on to others.

“Given the controversial nature of gene editing, I think it’s very valuable to increase the number of people in society that have hands-on familiarity with it and don’t view it as some sort of bogeyman, but rather as a powerful tool that can and should be used responsibly to improve many peoples’ lives.”