Teresa Clark: Celebrating Everything Plants Have to Offer 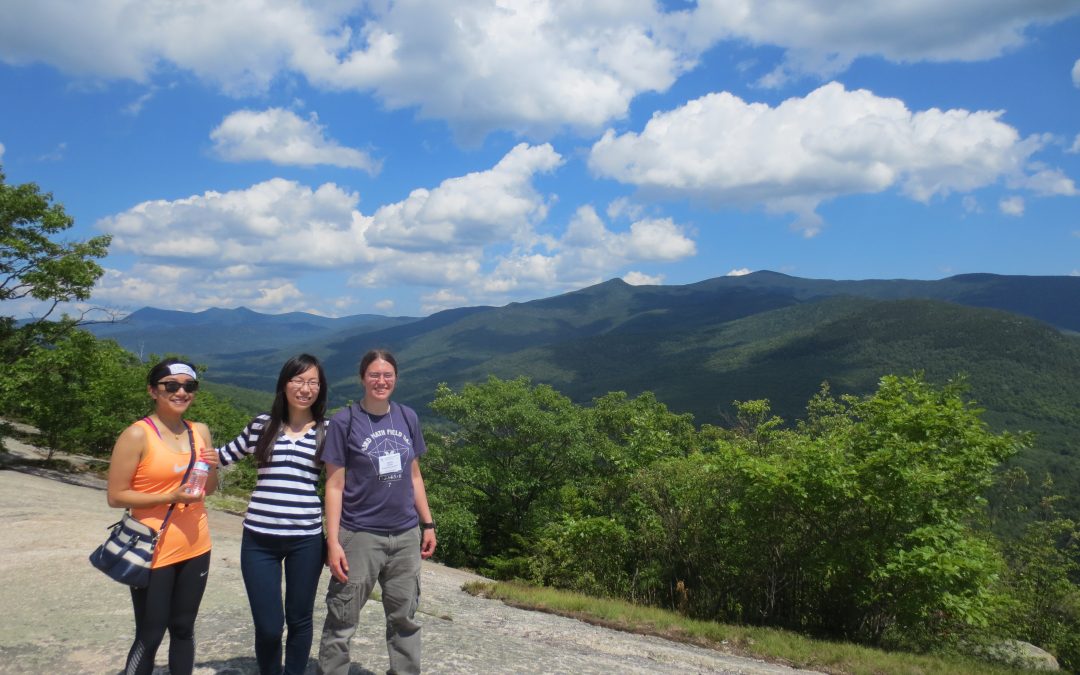 Teresa Clark wins the title of “plant lover” at CABBI. This scientist dedicates her time to researching how to improve oil production in bioenergy crops, to increase appreciation for all that plants can offer.

Clark was born and raised in Michigan, her childhood home within walking distance of a state park where she spent much of her young life. To this day, she loves to hike in the forest and along the beaches of her home state. But the degradation of these beloved natural areas from deforestation and littering upset her.

Her current career in plant biology and mathematical modeling at Brookhaven National Lab is the manifestation of that frustration.

“I wanted to figure out: How can I help the plants? I thought science was the answer,” Clark said. 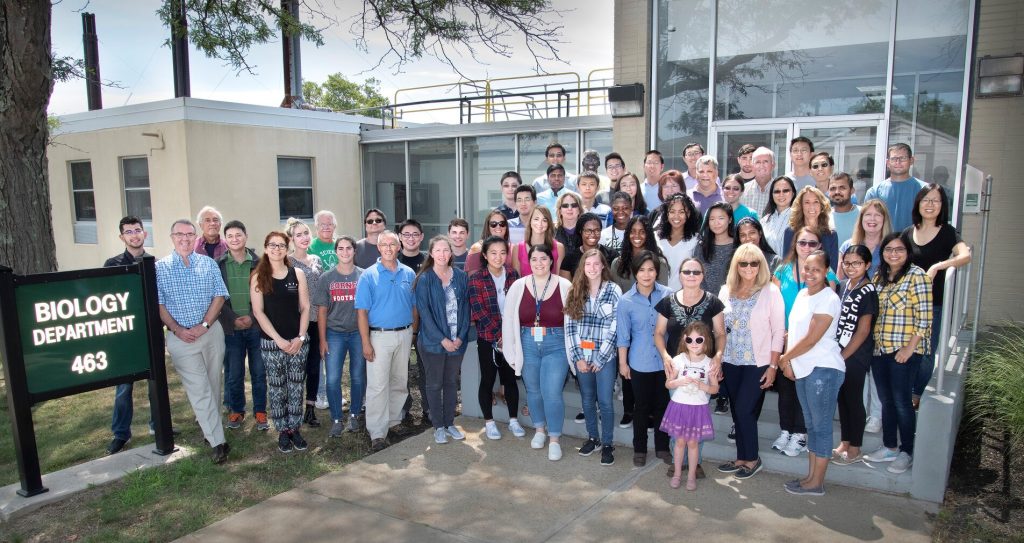 Above: The Biology Department at Brookhaven National Laboratory during a summer gathering in 2019. Clark is on the steps, third row from the back, in turquoise shirt and sunglasses. Top: Clark, right, hikes the hills of New Hampshire with Xinyu Fu (left) and Anqi Xing (middle) while attending a 2015 research conference. Credits: Teresa Clark

In pursuit of that answer, she received a dual-major Ph.D. from Michigan State University in plant biology and quantitative biology. She worked closely with computational biologist Yair Shachar-Hill researching carbon-nitrogen trade between Medicago truncatula, a legume, and rhizobia, nitrogen-fixing bacteria.

It was during this research that Clark learned that BNL’s Jörg Schwender was also interested in combining experiments and mathematics to understand plant metabolism. Now Schwender is her advisor in the Feedstock Production Theme at CABBI, where Clark has been a Postdoctoral Research Associate since January 2019.

For the past two years, Schwender and Clark have spent their time studying oil production in bioenergy crops.

“I use mathematical models and labeling experiments to predict what could be metabolically limiting how much oil sorghum or other grasses can accumulate in their leaves or stems,” Clark said.

What is key in her research is that the oil is derived from the leaves and stems of the crops. Traditionally, oil comes from the plants’ seeds. The latter is problematic because seeds are difficult to collect, and doing so often kills the plant. When the oil is concentrated in the stems and leaves, it can be harvested without destroying the entire plant. Oil production is essentially continuous, eliminating the time for the plant to regrow from seed.

“If you have a grass, you just cut it down and you get all of those leaves, and hey — the plant can still grow!” she said.

Clark splits her time between running mathematical models, tending to the plants in the lab, and doing experiments to measure vegetative oil content, so her schedule varies from day to day.

“It depends on what needs more work: Sometimes we run an experiment that takes four days to do, so I spend all my time in the lab,” she said. “Other times, you’ve got to figure out one little thing in the model. For example, I would love to be working on my stem model right now, but I need my plants to grow to give me that data first.”

Clark’s modeling allows scientists to simulate all of the factors at play when growing crops, like nutrient cycling and carbon allocation. The models do not provide an explicit set of instructions on how to increase oil production; rather, they provide suggestions. Whichever environmental factor is most prominent in the simulation is what scientists could then focus on in the lab, and the process is repeated until real-life results appear.

“While my modeling work won’t tell us exactly how to make more oil, it can tell us what we could focus on to make oil production more efficient,” Clark said.

The oil from bioenergy crops is used to produce biofuel, which reduces dependence on fossil fuels and cuts down on harmful emissions. If the coal and oil industries decline and dissipate as predicted, Clark’s research will provide a more dependable source of fuel.

In the next few years, Clark hopes to run her own lab focused on plant biology and metabolic modeling. Building on the collaborative nature of CABBI, she wants to create a lab where there are “both experimentalists and modelers together.”

In the meantime, Clark enjoys her role at the Center. Her research is essential to creating a sustainable future — and demonstrates the many crucial benefits that plants have to offer.