Stephen Moose: Bringing Science Back to the Farm 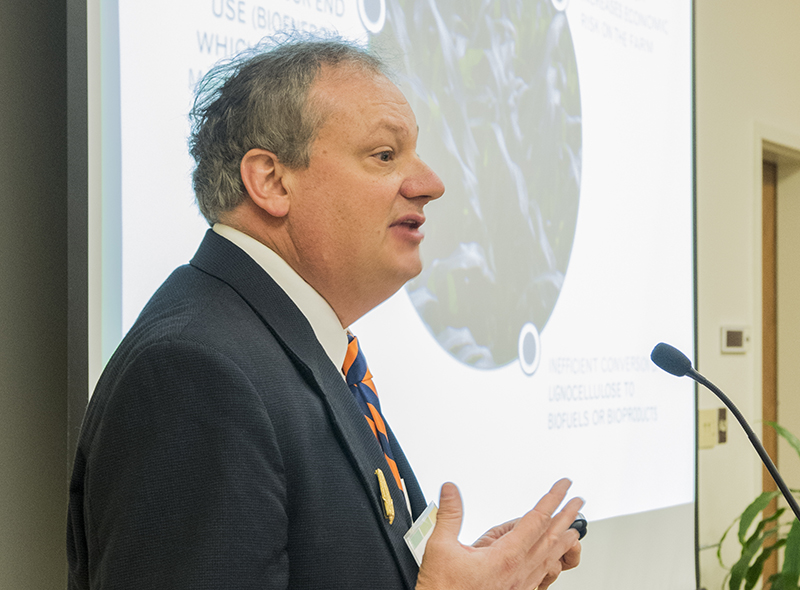 On the south side of the University of Illinois campus, a set of farm plots grow a variety of crops that are being studied and tested for productivity and efficiency. These plots are where Stephen Moose’s research begins.

After growing up on a farm in Ohio, becoming interested in genetics at a young age, and spending time working in industry, Moose is now a researcher at Illinois who is proud of the fact that he knows how to grow crops like a farmer does.

“I was a farmer who became a scientist, and now I’m a scientist who wants to take it back to the farm,” he said.

Moose, a Professor of Crop Sciences, was one of the first people hired on the Illinois campus whose job description included the word “genomics.” This was years before the Carl R. Woese Institute for Genomic Biology was formed, and Moose knew that the emerging field of genomics would change his research in crop biotechnology. But scientists didn’t yet have the technology to understand what this change would mean.

“We knew there was genetics, but a lot of it was a black box,” he said. “Now, we can actually look at it.”

Most of Moose’s research focused on corn, but it has now evolved to include using genomics to unlock the full potential of both corn and bioenergy crops.

Moose, an IGB Affiliate, recently became involved with the Center for Advanced Bioenergy and Bioproducts Innovation (CABBI). This multi-institution research collaboration aims to research and develop sustainable biofuels and bioproducts. Moose is leading the Feedstock Development theme, one of the project’s priority areas, which aims to use plants as “factories” and engineer them to produce biofuels and bioproducts in their stems.

Bioenergy involves using the natural products in plants to create energy. Moose’s work will involve figuring out how to redirect carbon in bioenergy crops to make the plant more productive overall. Most of the time, carbon is shipped to the seeds. It will sometimes stay in the plant’s stem, but carbon there is difficult to break down.

“The challenge of bioenergy is to unlock all that carbon, or at least some of it, into forms that we can then use as energy,” Moose said.

What Moose and his colleagues hope to do is to trick the stem into acting like a seed, so that it stores more sugar or makes oil, like seeds do. The goal is to make the stem just as productive as other parts of the plant.

To do this, Moose and his colleagues first have to understand the contents of the plant’s genome, which is challenging because of plants’ complexity. Some of the bioenergy crops Moose studies have two or more copies of a genome. He compares this challenge to solving jigsaw puzzles.

“It’s hard enough to put together one puzzle at a time,” he said. “But think if I was putting together eight that looked a lot alike, at the same time.”

The added challenge is figuring out what parts of the genome to target so they can be manipulated through gene editing. Much like a word processor, genome editing lets scientists edit, insert, delete, copy, and paste individual genes.

As genome editing has advanced, scientists have been able to make changes that are more precise. This is good news for Moose’s work, which aims to make specific changes to genomes that will make the plant more productive.

Moose and his colleagues want to improve bioenergy in a way that’s economically viable to farmers, processors, and customers — and in a way that doesn’t compete with food production.

Other areas of Moose’s research focus on understanding the mechanics behind things farmers typically use — such as nitrogen fertilizer and hybrid crops. Moose wants to understand why nitrogen increases the size of corn and why hybrids are more successful. By understanding the biological processes behind these two common practices, scientists could figure out how to grow crops just as well with less nitrogen, or discover a new hybrid that will add to genetic diversity.

Moose said the most rewarding thing about his research is that he’s able to grow corn like a farmer and then link it back to the lab.

“You’ve got to grow them all the way to the end to make seeds, and you have to deal with weather,” he said. “So it’s challenging because a lot of people don’t want to deal with Mother Nature … but it’s the variables and how the plant deals with those is what really is important.”

It’s a difficult process — but is also the most rewarding one for Moose.

“Starting out 20 years ago, I didn’t know if it would be possible to actually do this the way I’ve tried to do it, and would I have the patience for it,” he said. “But it’s starting to pay off now.”

When Moose first came to Illinois, he began working on an ongoing experiment that began in 1896 that tested corn samples for different traits. It’s one of the longest-running genetics experiments in plants. That research continues today.

“Universities can do this kind of thing,” he said. “I think that’s where I fit into the story.”