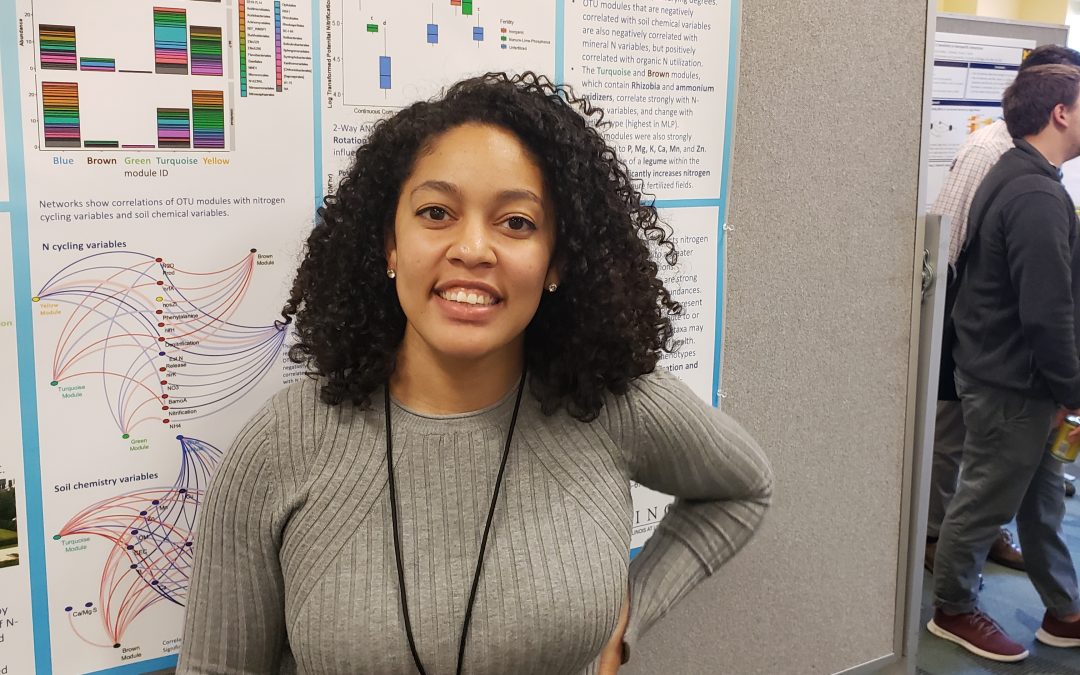 Spunky, intelligent, and engaging are the three words that best describe CABBI’s Sierra Raglin. A Ph.D. student, dedicated scientist, and mother of rats, Raglin has a lot to say on agricultural sustainability.

She grew up along the Hudson River in Nyack, N.Y., where her fascination with aquatic systems began. She was a self-described “super-nerd” and enrolled in a unique program through her high school in which students conducted a three-year research project. She studied how nitrogen pollution impacts phytoplankton growth in biological oxygen demands at the Lamont-Doherty campus of Columbia University. 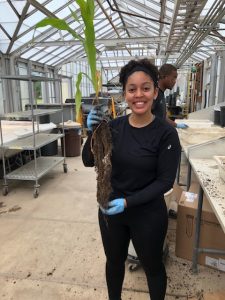 Above: Sierra Raglin with a sorghum rhizosphere at a University of Illinois greenhouse in June 2019. Top: Raglin presents her research exploring how long-term fertility and rotation influence nitrification and denitrification at the May 2019 Purdue Applied Microbiome Symposium.

Raglin spent her undergraduate years at Rutgers University in New Jersey, completing a major in Pre-Veterinary Animal Science and a minor in Marine Science. Halfway through her education, she became distressed by the difficult aspects of being a vet — like euthanizing animals — and knew that the career was not for her. Despite this, she finished her degrees, looking to reshape her educational path in graduate school.

Rutgers, like the University of Illinois Urbana-Champaign, is a land-grant university and hosts expansive farms for research purposes. It was on these farms that Raglin developed a profound appreciation for microorganisms.

“I’ve seen a 2,000-pound cow almost die because the community composition of the microbes in her gut changed; her diet was not ideal, she got bloat, and then, boom — a 2,000-pound animal on the brink of death,” she said. “It’s incredible that such a microscopic, seemingly irrelevant organism has so much power.”

Concerned for the health of the aquatic systems that she loves so much, Raglin had also taken an interest in agricultural systems — specifically nitrogen runoff, which contaminates waterways and leads to detrimental phenomena like the hypoxic zone in the Gulf of Mexico. Raglin decided that the best thing she could do for water ecosystems is work to keep nitrogen in the fields and out of waterways in the first place. Congruent with that goal, she is currently working on her Ph.D. in Natural Resources and Environmental Sciences at Illinois, the heartland of agriculture.

“I would call myself a microbial ecologist,” she said, explaining her less-than-straightforward educational pathway. “Even though I have a degree in animal science, I wouldn’t call myself an animal scientist by any means.” 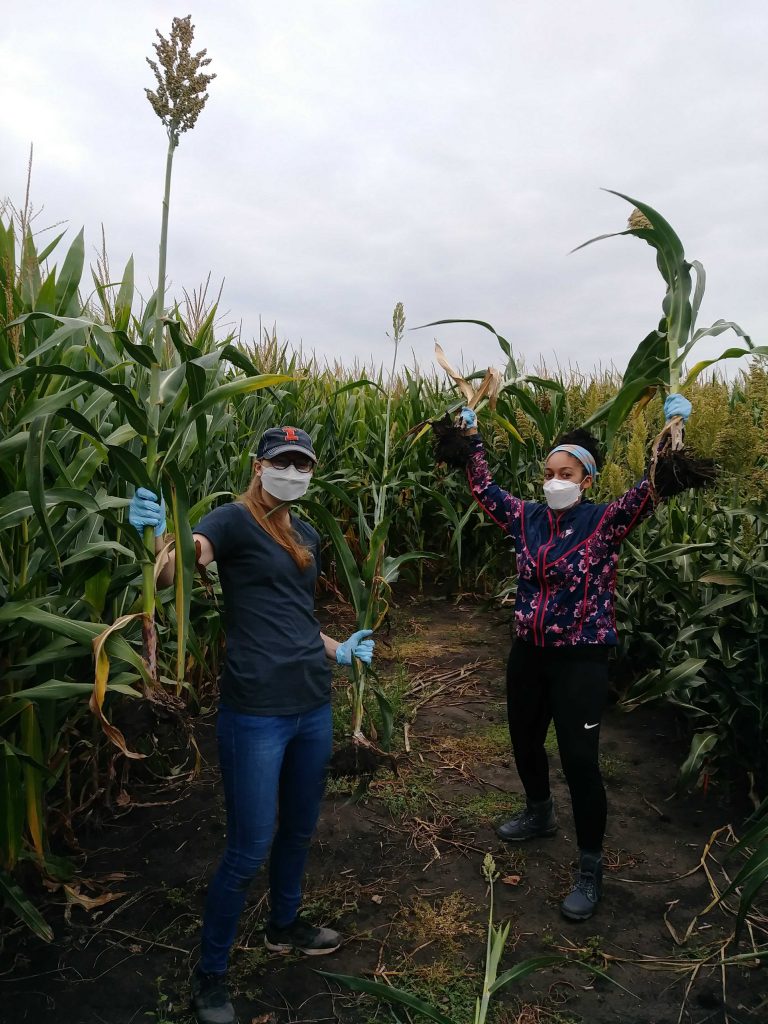 The culmination of her reverence for microorganisms and agricultural studies is manifested in her work for CABBI. In Angela Kent’s lab, under the Sustainability Theme, Raglin studies the ability of maize and sorghum to manipulate ammonia-oxidizing bacteria over time. In the hunt for renewable sources of energy, bioenergy sorghum has been carefully bred over the years in synthetically fertilized soils. Raglin wants to know if bioenergy sorghum, compared to its wild varieties, has the weakest ability to inhibit nitrification — an important step in the nitrogen cycle — since it wasn’t bred in an environment where that process is necessary. Furthermore, she wants to know whether the changes in bioenergy crops are strong enough to affect the microbial community in the soil, what that means for ecosystem-level processes, and how it impacts both nitrogen and carbon dioxide losses in the soil.

“You could broadly call my research the biochemistry of domestication: how domestication of maize and sorghum has changed biochemical pathways and interactions with microorganisms,” Raglin said.

In action, this research involves plentiful field work during the growing and harvest seasons, and data analysis during the off-season.

“Sampling involves getting up as early as humanly possible, going into the greenhouse, destructively pulling the plants out, cutting off the root systems, and cutting off the above-ground biomass,” she said. “Then there’s a boatload of soil weighing. And you have to do a bunch of pipetting. We’re like the pipetting gods.”

But research is not always so straightforward; work in the greenhouse brings setbacks — including pests. Raglin’s advice: “The only way to get through graduate school is to have confidence without arrogance. Don’t think that you’re too good for anything to go wrong. Because I learned the hard way that an army of mice can come eat half of your plants. Anything that can happen, will happen. Be ready.” 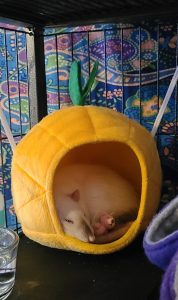 One of Raglin’s pet rats. All credits: Sierra Raglin

In Raglin’s nearly three years at CABBI, she has learned a lot and admires the institution.

“It’s really eye-opening also having firsthand experience on not a single lab grant but a huge interdisciplinary cohort of investigators across universities,” she said.

Moving forward, Raglin’s ultimate life goal is to study urban agriculture, decreasing land conversion for ag, and promoting environmental justice through food equality. As an African-American woman, she is hyperaware of environmental injustices in America. As a scientist specializing in agricultural systems, Raglin is in a unique space where she can simultaneously help increase food access for minority communities while conserving unused land and maintaining current agricultural lands.

In her free time, Raglin still fosters her childhood love for all animals, furry or scaly, including rats, chinchillas, hamsters, more rats, turtles, lizards, parakeets, dogs, and a cat. She and her roommates are the proud parents of three rats that they rescued from a snake breeder.

“They are the sweetest things,” she said. “They love cheek scratches!”

Raglin is also an avid traveler. The child of international flight attendants, she has literally been traveling since she was in the womb. Although her adventures are on pause for now, Raglin looks forward to touring the world again. Until then, she is staying positive and dedicating herself to making the world a more sustainable place.