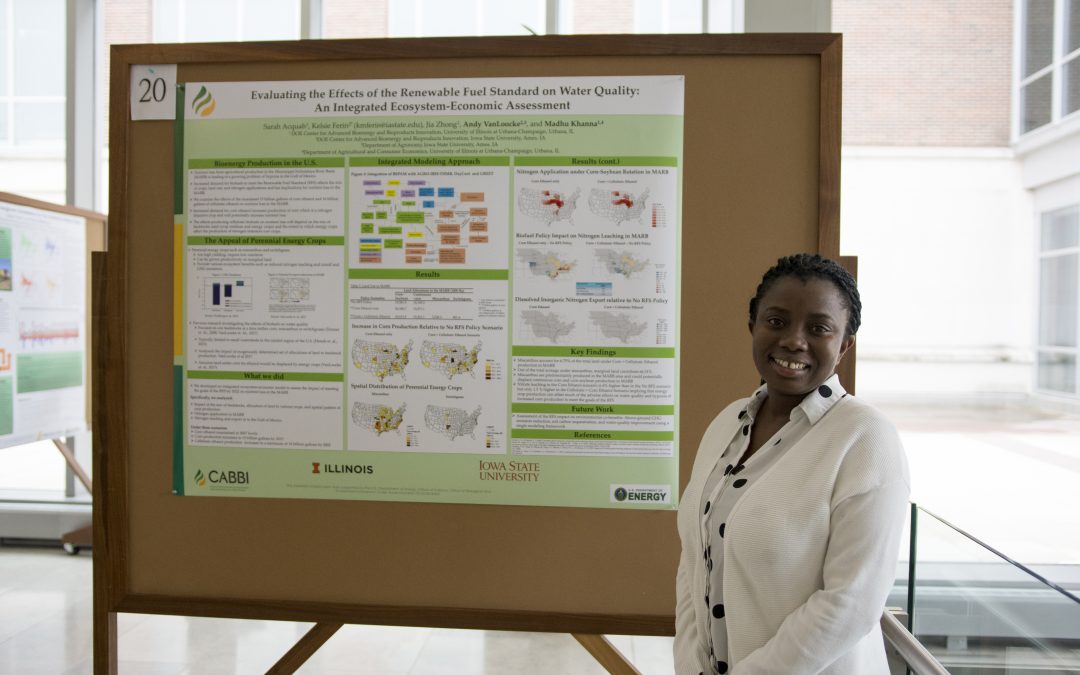 Sarah Acquah is busy working on three projects as a CABBI postdoctoral research associate at the University of Illinois at Urbana-Champaign. But don’t make her pick which one she likes best.

“I don’t have a favorite,” Acquah said. “I love all of them; they are my babies.”

Working for CABBI Sustainability Theme Leader Madhu Khanna, Acquah’s passion for modeling and agriculture has flourished. However, her professional journey took several twists and turns before she landed with CABBI.

Originally from Ghana, West Africa, her interest in agricultural economics was inspired by her brother, who advised her to pursue the subject matter because of her love for numbers. While in Ghana, she obtained a bachelor’s degree in Mathematics.

“With my math background I ventured into agricultural economics and (my brother) was absolutely right,” she said. “It was more applied math in the areas of looking at the agricultural market and pricing.”

Now, at the University of Illinois, she uses a combination of all three of her degrees to help with her assignments. Acquah’s projects focus on using the Biofuel and Environmental Policy Model (BEPAM) to analyze land use change impacts of biofuel production, nitrogen applications, and environmental co-benefits of the Renewable Fuel Standard (RFS).

“This isn’t lab work whereby I can have new discoveries and have patents for it, but rather policy research,” Acquah said.

For one project, Acquah collaborates with a doctoral student at Iowa State University to examine nitrogen leaching and the export of dissolved inorganic nitrogen (DIN) to the Gulf of Mexico that causes hypoxia — the lack of oxygen due to nutrient loss — and the “dead zone” in the Gulf of Mexico. 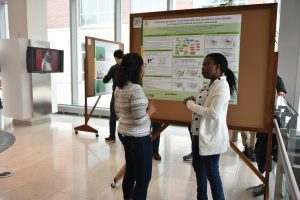 “The Midwest does not have a water scarcity problem, but rather they have issues of nitrogen leaching predominantly from agricultural sources and exported via the Mississippi and Atchafalaya rivers into the Gulf of Mexico, which currently has the second-largest hypoxia problem globally,” Acquah said.

Because the Gulf’s fish and underwater inhabitants can’t survive with low oxygen levels, her research focuses on how to minimize this nutrient loss and the hypoxia problem.

“Currently the focus is on corn and soybean rotations in the Midwest and how the establishment of cellulosic ethanol production mandate can replace these feedstocks with a more sustainable feedstock like switchgrass or Miscanthus,” Acquah said. “These crops use very minimal nitrogen, and can grow on marginal land and significantly sequester soil carbon.”

The implications of this research could have huge effects on the ecosystems in the area — specifically, if corn-soybean production for ethanol can be replaced with cellulosic feedstocks in the Midwest.

Acquah’s research extends from land to sea: She also studies marginal land usage. Marginal land, as defined in her project, is land that borders on the margins of economic profitability and non-profitability. Typically, marginal land is seen as having less of an economic value, but CABBI researchers are investigating the feasibility of large-scale productive perennial grasses on these land types.

“What this marginal land study is doing is (assessing) how much marginal land exists, determining the economic incentives of using that land for bioenergy production, and (examining) the environmental co-benefits potentially available,” Acquah said.

Allocating land under food production to grow energy crops create incentive for a high crop price as well as the concern for food security. 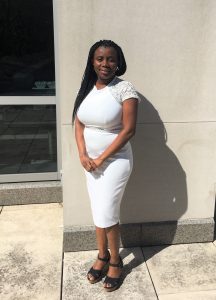 Acquah outside of the Carl R. Woese Institute for Genomic Biology building, her lab’s home base.

Part of CABBI’s mission is to develop efficient ways to grow bioenergy crops and to produce biofuels. Acquah is studying the effects of biofuel production on greenhouse gas emissions — bringing her three projects full circle.

“One of the benefits of having biofuel production is to cut down on greenhouse gas emissions. A focus on fossil fuels results in dependency on imported oil with possibility of increasing greenhouse gas emissions,” Acquah said. “Replacing fossil fuels with biofuel and especially producing biofuel from cellulosic feedstocks such as switchgrass and Miscanthus have the potential of reducing carbon emissions and improving water quality.”

This research could have other implications.

“Biofuel production using cellulosic feedstocks, such as Miscanthus and switchgrass, improves soil carbon sequestration because of their biophysical properties and the capacity to sequester carbon,” Acquah said.

As one can imagine, working on three projects has Acquah busy all day, every day.

“In the past I was working on the model developed to analyze these issues, but currently I am finalizing our results into a research report,” she said.

Although Acquah spends most of the day working, her team makes it all worth it.

“My favorite part is the way my team connects and the interdisciplinary research,” Acquah said. “You can see the connection and the linkage and how we come together to address a common problem.”

A major issue that Acquah hopes her research helps address is the long-term impact that bioenergy and sustainability policies can have on the water quality in areas facing serious environmental threats.

“The outcome of the research, I would be happy if everybody appreciates it and how we inform some of the biofuel decisions being made and how it impacts on the whole ecosystem,” Acquah said.

As a postdoctoral research associate, she will move on to other research opportunities as she furthers her career. That research journey will have serious impacts beyond her work at Illinois.

“I am hoping my time here with CABBI and all the research I have been exposed to will put value on me whereby I can publish in a high-quality journal and add value to myself,” Acquah said.