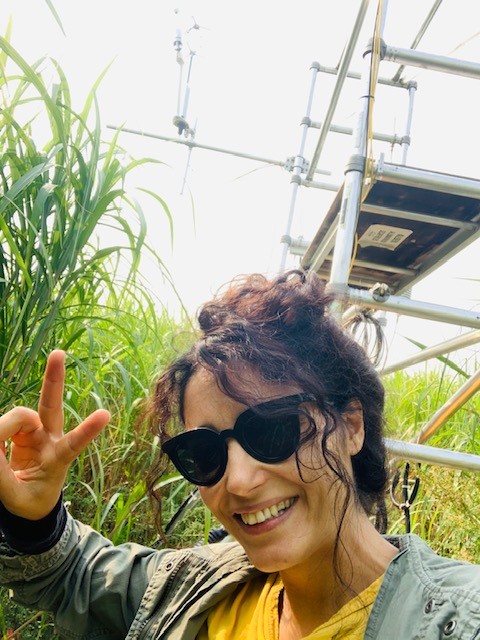 Rojda Aslan-Sungur is a proud immigrant from Turkey, a loving mother, a dedicated academic, and an asset to the CABBI team. Her data analysis work within CABBI’s Sustainability Theme contributes to ensuring a sustainable and productive future for bioenergy farmers here in the Midwest.

Aslan-Sungur was always destined for research, though she wasn’t given much of a choice.

“I grew up in an environment where we had to go to university. We had to study,” she said. “Being part of a minority population in my country, we had to use the power of the pen to rise up.”

Aslan-Sungur pursued her bachelor’s and master’s degrees in Chemical Engineering from the Izmir Institute of Technology in Turkey. She went on to earn her Ph.D. in Chemistry from Bolu Abant Izzet Baysal University, where her research focused on eddy covariance — a special technique to measure carbon dioxide and water changes (flux) within a terrestrial ecosystem.

“My Ph.D. work was unique because I was the only one in my country working on eddy covariance!” she said. “But I also felt really lonely. Everyone else working on this research was in Europe or North America.”

Hence how she ended up working with Andy VanLoocke in the Department of Agronomy at Iowa State University. Aslan-Sungur has been a Postdoctoral Research Scientist in VanLoocke’s CABBI Sustainability lab for three years, and she’s found a sense of home in the work.

“Andy is so open to new ideas,” Aslan-Sungur said. “And he’s really listening to you. He’s not just superficially listening.

“He’s really trying to lead you to solve the problem at hand.”

Their work addresses climate change and renewable energy in the context of agricultural resilience. Using eddy covariance towers, Aslan-Sungur tracks the flux of carbon dioxide as it cycles through agricultural systems. She’s interested in determining which bioenergy crops are best for the environment in terms of carbon dioxide fluxes.

“My measurements are a critical piece of the research to advance resilient agriculture systems that produce sustainable, affordable bioenergy crops,” Aslan-Sungur said. “The farmers can make decisions depending on my measurements to simultaneously increase their harvest and decrease their environmental impact.”

In her day-to-day life in the lab, Aslan-Sungur spends most of her time crunching numbers, turning raw eddy covariance data into comprehensible graphs for other CABBI teams to use in modeling work. The data from Iowa’s field sites is combined with that from the Illinois Energy Farm in Urbana to provide the most holistic picture possible of the evolving agricultural scene.

“I’m always analyzing the data,” she said. “It’s a huge data set, so I’m trying to craft a clear visualization so that the rest of the people in CABBI can understand. It’s not good if only I can track the data! It must be useful for the others.”

The importance of Aslan-Sungur’s work extends beyond merely the sphere of CABBI: The work by VanLoocke’s lab could radically alter the current standards of agriculture for the better. However, there’s still a lot to do.

“In the near future, I will continue research with Andy because I will never feel that I’m done,” Aslan-Sungur said. “There’s lots to do here at CABBI!”

An eddy covariance tower out in the field.