RISE Has ‘Lasting Impact’ on Student Interns from Diverse Backgrounds 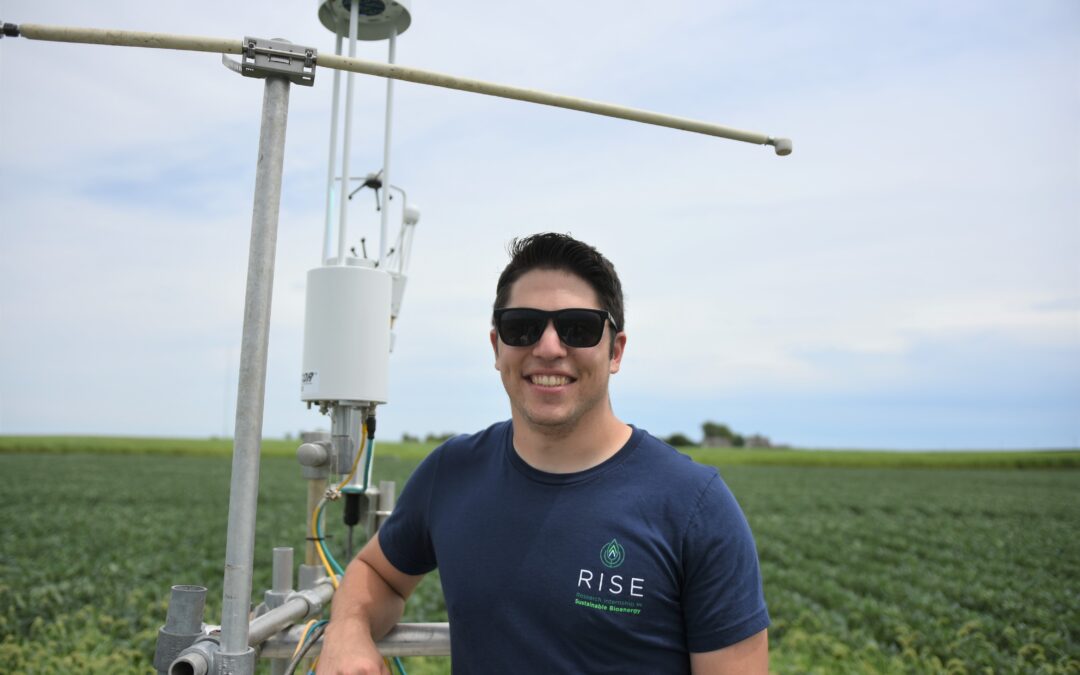 Wearing shades to deflect the bright sunshine, Max Garza hops up on a metal tower to adjust instruments rising high above fields of crops at the Illinois Energy Farm.

This college senior is a newly minted expert in eddy covariance, a system that scientists use to measure greenhouse gas emissions and other important characteristics of bioenergy crop ecosystems.

Garza is one of eight students who participated in the annual Research Internship in Sustainable Bioenergy (RISE) in summer 2022, created by the Center for Advanced Bioenergy and Bioproducts Innovation (CABBI). RISE offers bioenergy research and career development opportunities for undergraduates from groups underrepresented in STEM.

During the 10-week program, students are paired with a CABBI mentor on a research project to gain experience in plant biology, agronomy, synthetic biology, genetics, environmental sciences, chemical engineering, or civil & environmental engineering. They also participate in a series of seminars on STEM career options, graduate school, the research process, and science communications. Interns present their findings in a research symposium at the end of the summer.

The 2022 interns came from across the country and worked at six CABBI sites: the University of Illinois Urbana-Champaign, University of Nebraska-Lincoln, University of Wisconsin-Madison, Princeton University, Lawrence Berkeley National Lab in Berkeley, Calif., and HudsonAlpha Institute for Biotechnology in Huntsville, Ala. Each received a $5,000 stipend, and housing and travel were provided. 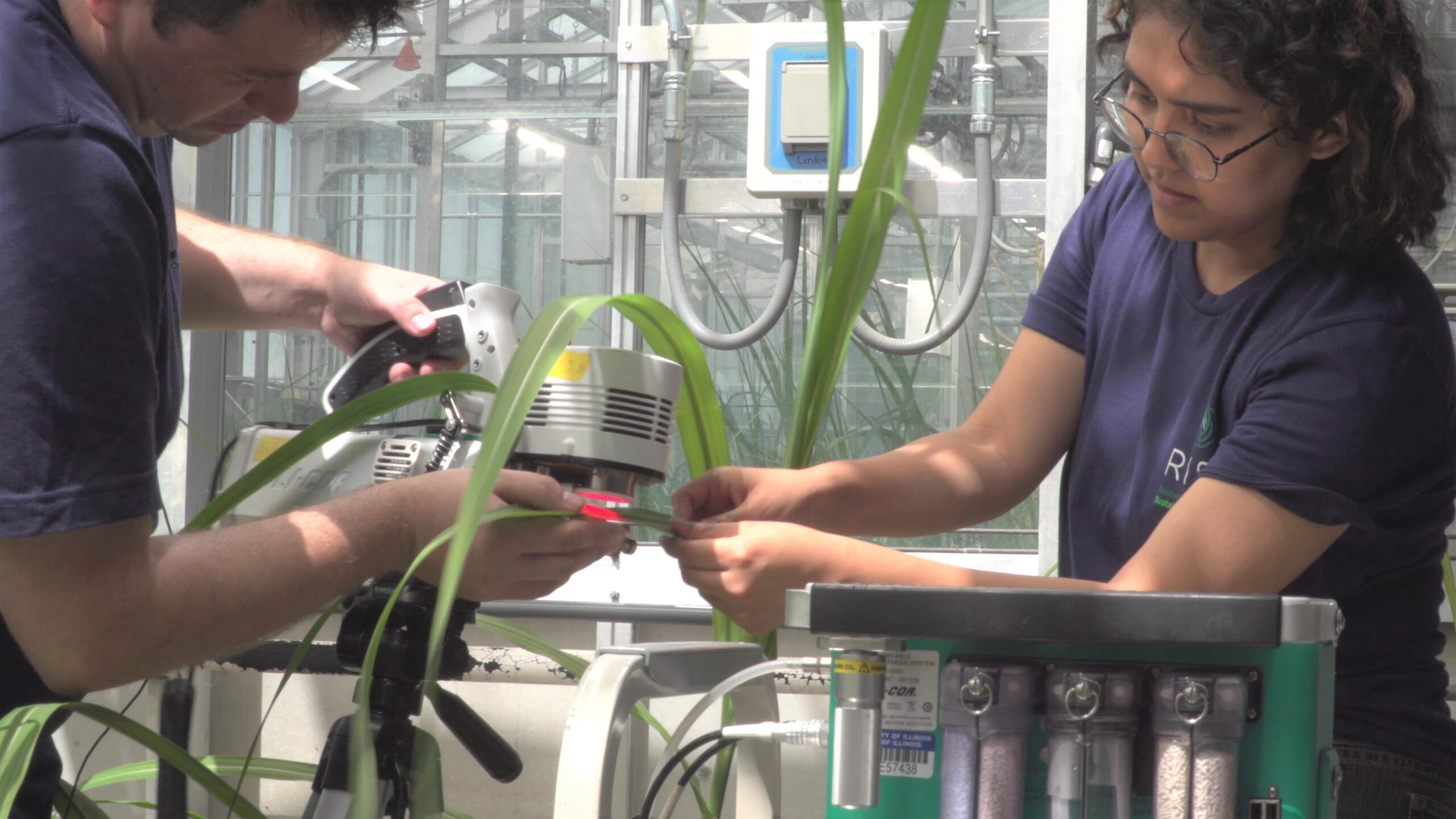 For Garza, who is from Texas, RISE was a chance to test his growing interest in a research career. An environmental engineering major at the Colorado School of Mines just outside Denver, Garza has always loved science and the outdoors and had recently begun thinking about graduate school.

“I wanted to see if I liked it first,” he said. His grandparents, the children of Mexican immigrants, also urged him to apply. “I don’t know if they had the opportunities that I do,” he said.

The program’s financial support and commitment to underrepresented students were crucial for RISE intern Alayna Trejo, now a sophomore at a community college in California. She worked with her mentor, Research Scientist Daniel Tejeda Lunn, and CABBI Director Andrew Leakey of Illinois on a project to increase water use efficiency in sorghum by reducing stomatal density.

“They were looking for people like me, and that was the first time that ever happened,” Trejo said. (Click here to see a video about Trejo’s RISE experience.)

Garza also liked that he knew in advance what his research project would be. He worked with mentor Christy Gibson, a CABBI Sustainability Postdoc, and Principal Investigator Carl Bernacchi, Adjunct Professor of Plant Biology at Illinois, to measure greenhouse gas emissions from plots of bioenergy maize and sorghum. They used eddy covariance flux measurements gathered by instruments placed on towers above the plant canopy.

These systems can measure wind speed, temperature, humidity, and the flow, or flux, of carbon dioxide (CO2) and other gases between the land and atmosphere. For Garza’s project, laser spectrometers and specialized sensors were used to measure nitrous oxide and methane emissions, which are produced naturally in the soil, as well as CO2. The researchers also compared carbon sequestration abilities of different crops over time and how factors like seasonal changes and crop rotation affected GHG emissions. For his research presentation, Garza discussed how methane emissions could be affected by increased rainfall, as the Midwest is projected to see more rain with climate change. The towers’ methane sensors provided new data and a fuller understanding of the processes involved. 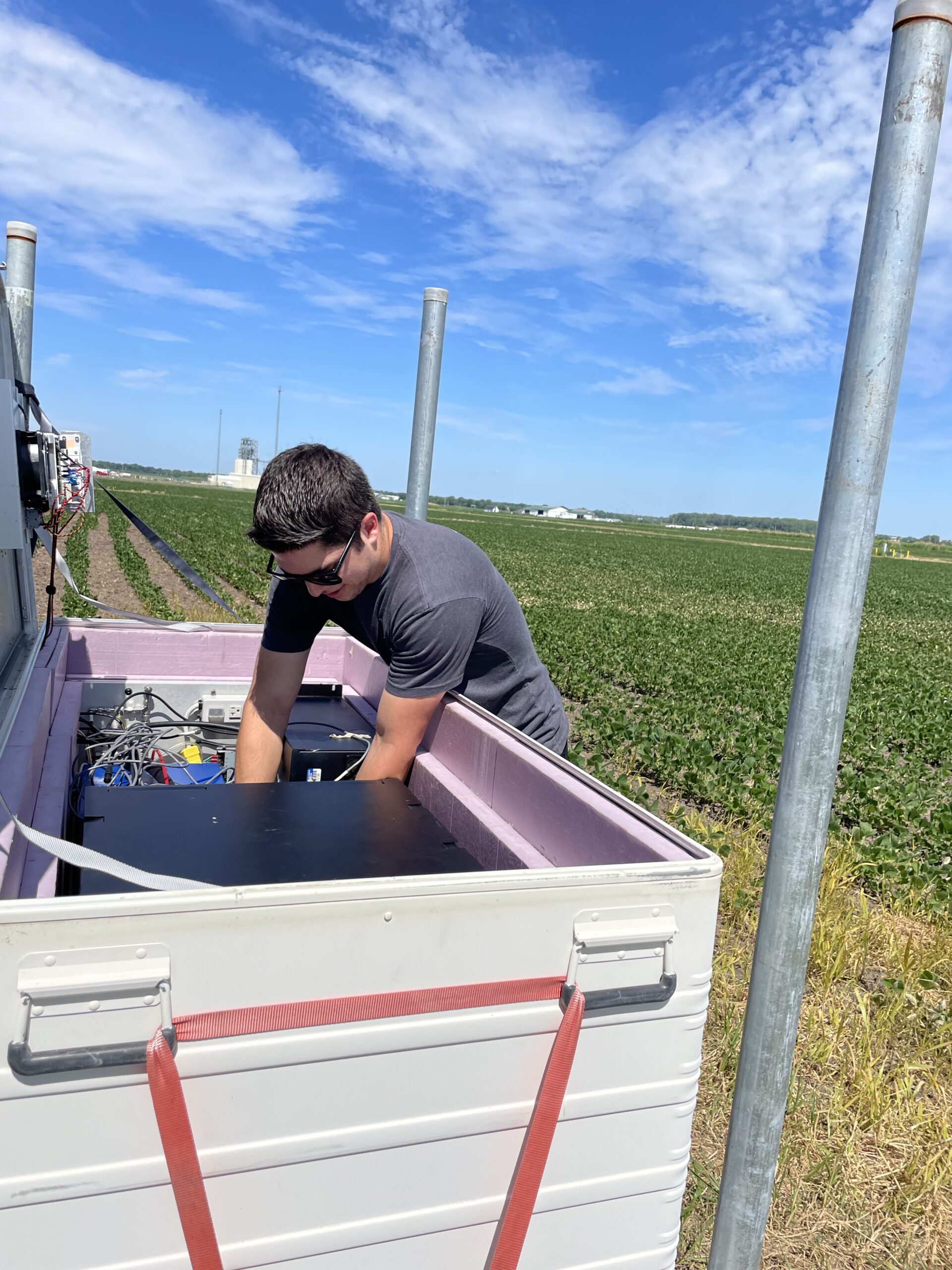 The experience was hands-on. Garza checked the system daily, trouble-shooting problems, and learned how to use laser spectrometers and process data. He also improved his writing and presentation skills.

Overall, the RISE experience strengthened Garza’s interest in research and graduate study, with a possible focus on air quality and GHG emissions. He was thrilled when Gibson invited him to present their research with her at the American Geosciences Union annual conference in December in Chicago.

“Max was a great mentee, and it was fantastic to work with him and help him develop a research project,” Gibson said. “I am excited to continue to mentor him as he adds skills to his portfolio for a career in environmental research. Having him join us at AGU to co-present our preliminary methane emissions work is part of our commitment to continue to support our mentees well into the future.

“This is what RISE is all about, and this is the lasting impact we are aiming for with this program. A mentor’s job is not done after your mentee leaves.”

Garza was impressed by the breadth of CABBI’s research and overall mission.

“I think it’s really important what they’re trying to do. For so long we’ve been using fossil fuels, and now we’re seeing the consequences,” he said. “It’s important, and cool to be a part of.”

The other RISE interns and their projects:

The interns from all six sites came together at the annual CABBI retreat in June, which Garza called one of the highlights of the summer. Garza and the other two Illinois interns, Trejo and Mitchell, became friends and met occasionally for lunch on campus.

Trejo and Garza were impressed by the diversity of the people they worked with — researchers from Haiti, the Bahamas, China, England, Nigeria, Saudi Arabia, and Turkey, “people I would have never met if I didn’t come to the University of Illinois,” Trejo said.

That representation is vital in science, the students said. Trejo, in fact, decided to apply for RISE after seeing a CABBI video on the program featuring the 2021 interns, including Marcus Abrams, an African-American student from Alabama.

“I just resonated with him when he said that was the first time he ever left Alabama, feeling that nervousness,” she said. “I felt the same way. Leaving California to come all the way to the Midwest was different for me. Since he enjoyed his time here so much, I felt like I would, too.”

Trejo hopes to apply the plant physiology knowledge she gained through RISE to pursue research with seaweed species. And her five-year goal? To be a researcher at the desk, “doing what I love most.”