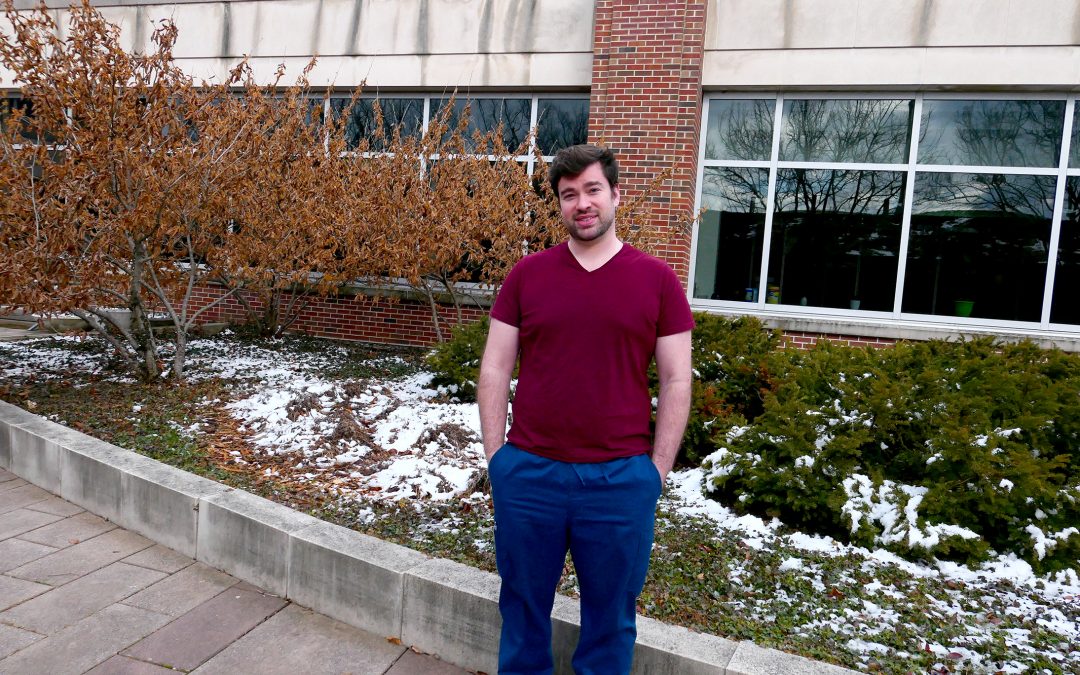 Matthew Waugh, a Postdoctoral Researcher in Professor Yi Lu’s lab, is not one to brag about his work.

“Most of my time is spent waiting for water to drip — either that or cleaning,” Waugh said.

While it might not seem glamorous, all that dripping water is actually part of the complicated process of harnessing and manipulating enzyme activity to perform biotransformations that do not exist naturally. This novel form of chemistry may literally take place on the nanoscale, but it’s playing a big part in paving the way for a globally sustainable future.

Waugh comes from a long line of scientists. Both of his parents are microbiologists, and his grandparents are chemists. He’s been interested in research from a young age; following the family tradition, he studied chemistry during his undergraduate years at the University of Virginia. During that time, Waugh’s interest in chemistry developed into a passion for the interface between biology and chemistry. He pursued this interest at the University of Michigan, where his graduate research focused on mechanistic enzymology.

After receiving his Ph.D. in Chemical Biology, Waugh joined Lu’s lab at the University of Illinois at Urbana-Champaign, where his research in enzyme engineering currently takes place. He works within CABBI’s Conversion theme, which is to say that he’s involved with the design-build-test-learn framework employed to engineer organisms that can efficiently produce diverse, high-value molecules such as biodiesel, organic acids, jet fuels, lubricants, and alcohols.

“I’m interested in sustainability and how the work that we do can improve the bioeconomy,” said Waugh, whose research focuses on finding ways to produce necessary molecules from renewable resources instead of traditional oil.

“The whole theme of CABBI is turning plants into factories. Plants are the thing: They convert sunlight into energy. The idea is to engineer those plants to make things that are useful for us,” he said.

Waugh is working on several projects since the design-build-test-learn cycle necessary for this caliber of work is long and ongoing. His work is very modeling-heavy, which he finds eye-opening because this is his first experience with in silico techniques. He and his labmates can use computer models to predict the behavior of the enzymes they work with. They cycle between testing enzymes through wet lab experiments and using their results to fine-tune their models to make better predictions.

“It’s a really challenging prospect to either design novel activity or significantly perturb biology to tune activity in a direction we want, because there are a lot of moving parts,” Waugh said.

He dubs himself and his colleagues “molecular mechanics.” They peer under the hood of nature’s machines — proteins and enzymes. His job is understanding these machines, tweaking and tuning them, and building better ones to perform new types of useful reactions. In other words, CABBI scientists are developing more efficient and better catalysts to do the practical chemical reactions our society needs done.

Despite his many endeavors, Waugh describes his successes as being hard-won. He explains that science is an unsolved problem in which one must “learn how to be stupid, and how to be stupid productively. Doing research is 90% failure, and in order to be a researcher, you have to be OK with that.”

Waugh says he isn’t frustrated by failure, though, and he always tries to learn from his mistakes.

“Biochemistry is not a solved problem. We are working on it because there’s a lot to learn. We’re always discovering new layers of complexity that we didn’t know were there before,” he said.

The lab at the University of Illinois is bigger than any other lab he’s worked in before. As a result, a wide variety of people, projects, and expertise are at the ready at all times. Waugh explained that while he’s the lab’s resident biochemist, his group also features an expert on modeling, a synthetic organic chemist, an inorganic chemist, and many other skilled researchers. In a place like this, there’s a lot to learn.

“There’s plenty of very interesting scientific discourse that happens — that’s always nice. I’ve learned a lot from (my colleagues in the lab),” he said. “Probably the most valuable thing I’ve learned here is how to manage a group of people.”

Outside of the lab, Waugh can be found hiking, climbing, and biking all over the world. Of all the places he’s been, New Zealand struck a chord with him.

Although Waugh’s research is physically small, it will largely affect the bioeconomy to help create a more sustainable world.