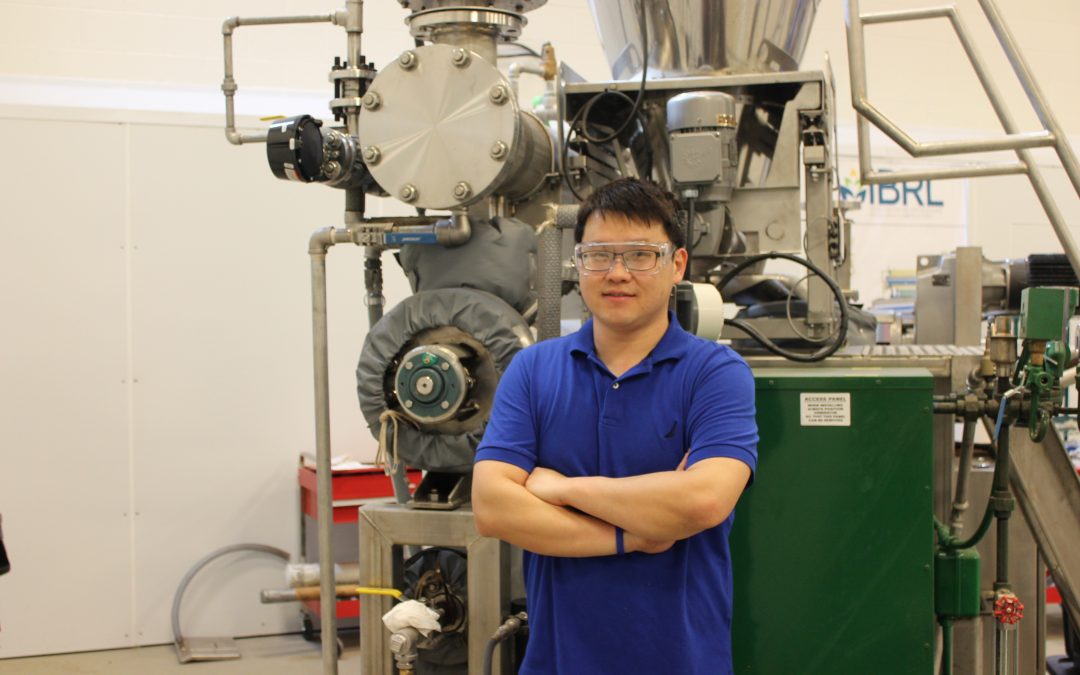 It’s not often that volleyball, paper-making, and pilot-scale biomass plants are mentioned in the same sentence. But for CABBI Conversion Postdoc Ming-Hsun Cheng, all of the above are integral to his identity as a researcher, risk-taker, athlete, and scientist.

When Cheng began his undergrad in Forest Products Science at Taiwan’s National Chiayi University, he was faced with a decision that set the scene for his career: Did he prefer forestry’s craft-based component or the discipline’s science-centric side?

Based on Cheng’s current station in the Department of Agricultural and Biological Engineering at the University of Illinois, it’s no surprise that the latter won out. Despite opting for chemistry over craft, Cheng did take courses in paper-making and wood-pulping throughout his time as an undergrad, completing several internships to refine his craftsmanship capabilities.

When it came time for graduate school, Cheng attended National Taiwan University to pursue a degree in Forestry and Resource Conservation. This time around, Cheng had an emphasis in biofuel conversion, specifically converting forest residue — wood chips and tree bits left over after commercial forest clearing — into biofuels.

After an 11-month period in the Environmental Protection Bureau of Taiwan’s substitute military service, Cheng’s pursuit of a Ph.D. brought him to Iowa State University, where he completed his doctorate in Agricultural and Biosystems Engineering. With his focus shifted from Taiwanese forests to Iowan fields, Cheng’s research in life-cycle analyses of soybean oil production concentrated on optimizing biofuel for the economy as well as the environment. 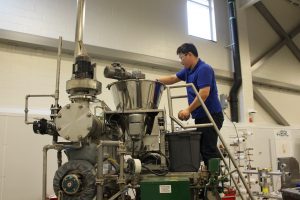 In Fall 2017, Cheng began his current position in the Department of Agricultural and Biological Engineering at Illinois, where he works with CABBI’s Conversion team to optimize bioenergy sorghum for valuable chemical production. Cheng describes his role in CABBI Deputy Director Vijay Singh’s lab as “intermediate.” His team acts as the catalyst that converts fresh-from-the-field biomass into intermediate products — sugars — which are transformed into end products farther down the line.

After sorghum is harvested, dried, and ground, Cheng facilitates a process called “hydrothermal pretreatment.” This entails loading raw biomass into a reactor and “treating” it with hot steam, opening up the sorghum’s structure and separating useful components from the not-so-useful. Interestingly, the biomass deconstruction process closely resembles the paper-making methods Cheng picked up during his time as an undergrad.

“After that, we collect the pretreated biomass and do the mechanical refining process,” he said. “My role is to produce the hydrolysate and provide it for other CABBI groups to use, for the further production of chemical products like fatty acids and biofuels.”

While Cheng came to Illinois well-versed in conversion, his biggest learning curve was scale- rather than content-related. Unlike the laboratories to which he’s accustomed, his experiments now take place at the Integrated Bioprocessing Research Laboratory (IBRL) pilot plant.

Pilot plants — where scientists fine-tune procedural imperfections and “fill in the gaps between the lab scale and the industrial scale” — come with higher stakes, bigger machinery, and more hands-on and physically demanding work than the lab. At IBRL, Cheng is working on the latest pilot-scale continuous pretreatment system, one of the few in the US that is available for public use.

This project is a prime example of a day in the life at a pilot plant, where toeing the line between the known and the never-before-tried comes with the territory. But this mix of trial, error, and calculated risk-taking is what Cheng appreciates most about his job:

“The most interesting parts and the most challenging parts (of my job) are the same … there’s no textbook for you to follow. You just have to try, and keep trying something different every time, to get exactly what you need.” 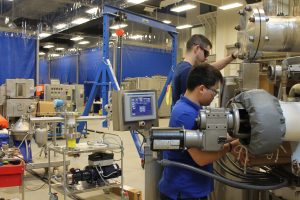 Inherent to the trial-and-error experimentation model is a sizable amount of patience, perseverance, and persistence for difficult problems that could take the Singh Lab weeks to solve. Luckily, Cheng’s experience with teamwork and troubleshooting aren’t limited to the lab:

“I’m a volleyball guy. I started playing in junior high, and it’s been my hobby ever since,” he said. “I still play tournaments in Chicago with my friends from Iowa State. It’s all about teamwork: A lot of people like spiking, but for me, I prefer to have better defense. The feeling of getting the ball back up with a strong hit — that feeling is pretty cool.”

Striking a balance between teamwork and independence is important to Cheng as a scientist and as an athlete. When he needs time to himself, Cheng slows down and switches from volleyball to billiards, the game he describes as “more strategy, and more of a personal sport.

“When I play billiards, I can totally calm down and feel very relaxed, and I can communicate with myself.”

Be it personal or professional, academic or athletic, Cheng is always looking for ways to leverage his experiences to help him in present situations and propel him onto new future challenges. One of his long-term career goals has been to continue his momentum of scaling up: from lab to pilot plant, and hopefully one day at the industrial level.

“I like trying different things, especially new challenges,” he said. “I have done a lot of lab work, but I’m curious about the industrial operation. That’s something that fuels my curiosity. But no matter what I do in the future, working (at CABBI) will be very helpful for me.”

Even if Cheng isn’t sure what the future holds, it’s clear that whether he’s piloting a cutting-edge experiment, honing his billiards strategy, or learning a new language (he’s currently teaching himself Spanish), Cheng will always find a way to “scale up” and succeed.