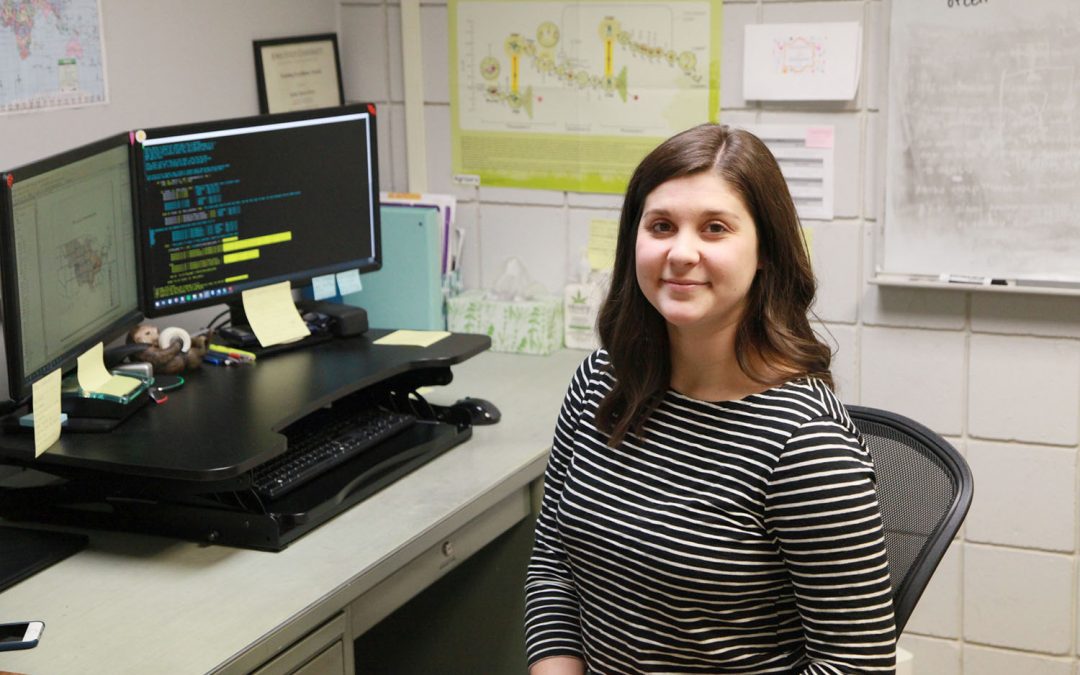 When Kelsie Ferin sits down to code, she has a million square miles of soil, water, and sky at her fingertips: from Iowa’s Corn Belt to the Mississippi River, and all the way to the Gulf of Mexico. These iconic landscapes form the backdrop for Ferin’s research on how bioenergy crops can help purify the nation’s water.

Ferin, a Ph.D. Candidate in Agricultural Meteorology at Iowa State University, cites an eighth-grade physical science class as the “aha” moment when she discovered her passion for all things Earth-related. Though her first love was biology, Ferin soon realized that her interests included not only the planet’s flora and fauna, but also the physical processes (like climate and weather) that act on them. Upon starting at Iowa State, Ferin married the two realms by pairing a Meteorology major with an Agronomy minor.

In her undergrad, Ferin began what would become a long-term collaboration with her now-PI, Professor Andy VanLoocke. Their research solidified Ferin’s interest in the intersections of soil, water, crops, and climate:

Pursuing a Ph.D. introduced a newfound passion for teaching, as well as Ferin’s quickly developing research focus: agroecosystem and hydrology modeling. Essentially, she studies water quality through the lens of crop production — how the two are intertwined, and how scientists can step in to make that relationship as sustainable as possible.

“I fell in love with how agricultural production influences water quality,” she said, “and how this is going to change ecosystems and crop production under future climate scenarios.”

Initially, Ferin’s scope of research was the North Raccoon River Basin, a small-scale water system in the Des Moines region. A year and a half in, her project became part of the Center for Advanced Bioenergy and Bioproduct Innovation (CABBI), a U.S. Department of Energy-funded Bioenergy Research Center led by the University of Illinois at Urbana-Champaign. Through CABBI, her region of study expanded to encompass the entire Mississippi River Basin:

“It was everything I was already doing,” Ferin said, “but scaled up.”

Ferin and VanLoocke’s research investigates how CABBI’s biofuel initiative could address not one, but two of the world’s most pressing sustainability problems: clean energy and clean water. Research suggests that planting perennial biofuel crops like miscanthus and switchgrass can help meet the nation’s Renewable Fuel Standard (RFS) while also decreasing nitrogen runoff in the Mississippi River system.

“Currently, we have a lot of corn and soybean production in the Corn Belt. In Iowa, the majority of our land is heavily fertilized. If we apply fertilizer before corn is able to grow its root system, the nitrogen has the potential to be leached through artificial tile drainage. If the soil isn’t going to retain nitrogen, it has nowhere else to go but out.”

“Out” could mean anywhere in the Mississippi River Basin. Depending on factors like rainfall, excess nitrogen often makes its way down the Mississippi and straight into the Gulf of Mexico. In the Gulf, the combination of steadily accumulating nitrogen and decay from dead organisms drastically depletes the area’s oxygen, creating what’s commonly referred to as a “dead zone.”

Ferin and VanLoocke’s work with CABBI intends to balance the RFS targets with the EPA’s Mississippi River/Gulf of Mexico Hypoxia Task Force, which aims for a 60 percent nitrogen reduction by 2035.

“In order to do that,” Ferin said, “you need to start reducing nitrogen leaching rates from the source, which leads all the way back to Iowa.”

CABBI’s initiative to cultivate biofuels in the Iowan Corn Belt is primed with a built-in method to combat nitrogen. Perennial grasses — like miscanthus and switchgrass — are efficient in nitrogen cycling and have larger root systems and longer growing seasons than annuals. This allows them to absorb more nitrogen and reduce the amount that ends up in waterways. 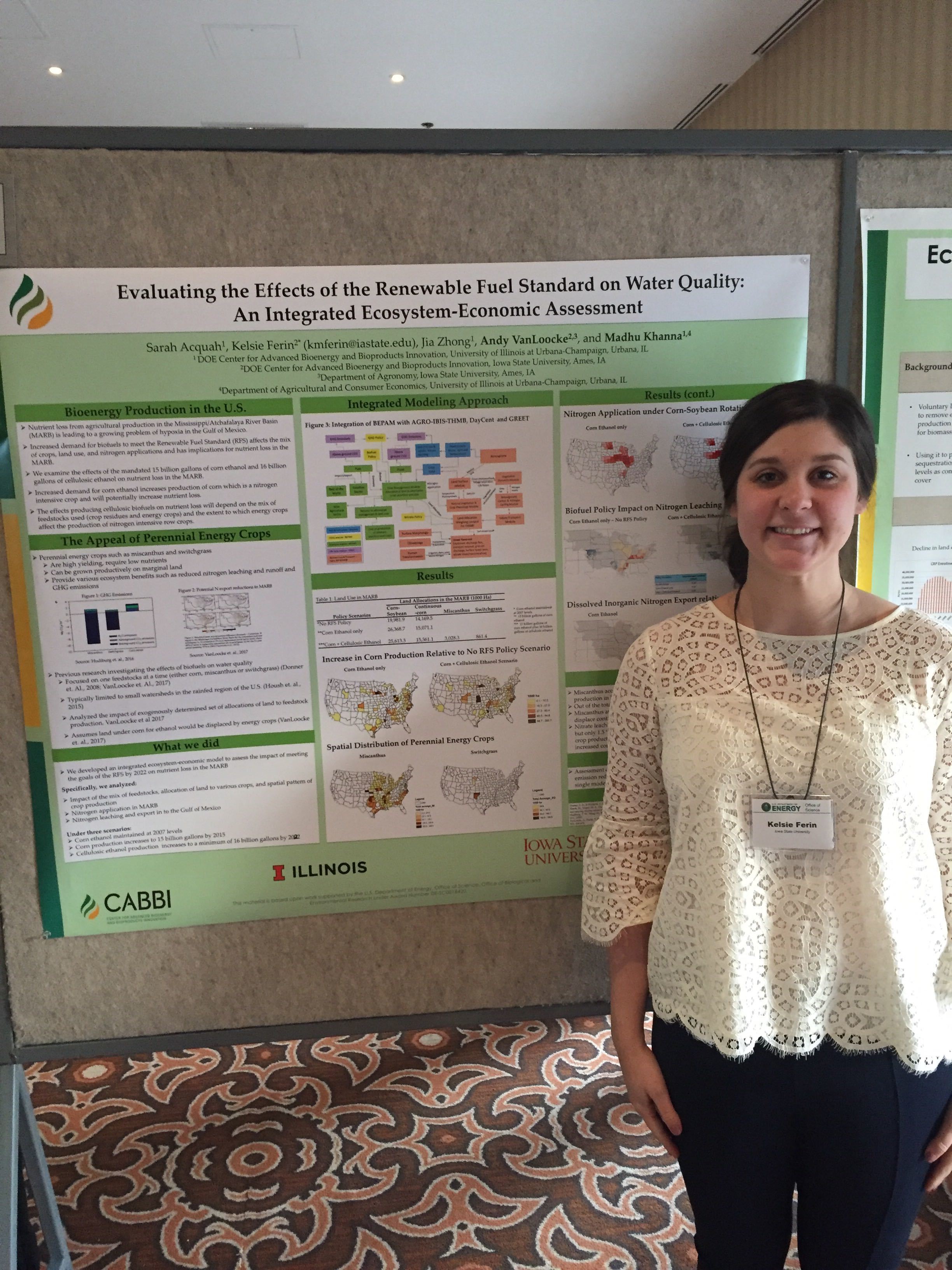 “If we’re able to implement more perennial crops like these that have more economic value and meet the demands of the RFS, we can also help reduce nitrogen leaching,” she said

Between land management, crop production, nitrogen, and the water cycle, there are more moving parts to this project than anyone could keep track of, and it just so happens that Ferin’s primary job is exactly that. Luckily, she is a coding connoisseur — since picking up Fortran for her Meteorology degree, she has enjoyed refining her coding chops and mastering as many coding languages as she can.

“I put my headphones on, and I get lost in coding,” she said. “And suddenly, it’s four hours later.”

Ferin uses a baseline agroecosystem model (created with a program called Agro-IBIS) to experiment with one central question: What do Iowa’s agricultural fields need to look like to yield positive results in the Gulf? She starts by tweaking different factors — photosynthetic parameters, nitrogen fertilizer application, and the allocation of land given to each crop per scenario — and simulating their effects on nitrate leaching, water drainage, and crop and biomass yields. From there, Agro-IBIS output is fed into a hydrology model, a real-world simulation of how water travels through the Mississippi River Basin.

“If we were to overlay a topography map, this is the direction in which (water) would flow. That helps to measure how much nitrogen export enters the Gulf of Mexico. If we were to continue agricultural production the way that we’re currently doing, will we meet the demand for the renewable fuel standard, and how would this affect water quality in the Mississippi River Basin as well as the Gulf of Mexico?”

The staggering scope of Ferin’s work is anything but daunting. On the contrary, she embraces the opportunity to combine her various interest fields into a cohesive picture.

“I guess by now, I’ve made the full circle back,” she said of her childhood interest in biology. “I’ve been able to implement biology back into my path and where I am today, learning how plants work and how they interact with the soil and the atmosphere.”

In addition to her interest in the subject matter, Ferin’s motivation to work tirelessly at this project stems from the conviction that her work will be instrumental in advancing the conversation surrounding sustainable agriculture. A Des Moines native herself, the issue of water purification hits very close to home.

“It’s the water that my family drinks,” she said matter-of-factly.

From a young age, Ferin has been well aware of — and eager to remedy — less-than-sustainable farming practices that have undesirable environmental impacts. Now, she is excited to help revolutionize those practices in the region where she grew up, sparking a chain reaction of sustainability that reaches all the way to the ocean.

“There are so many ways that we can change this,” she said, “and I want to be one of the people who can make that happen.”