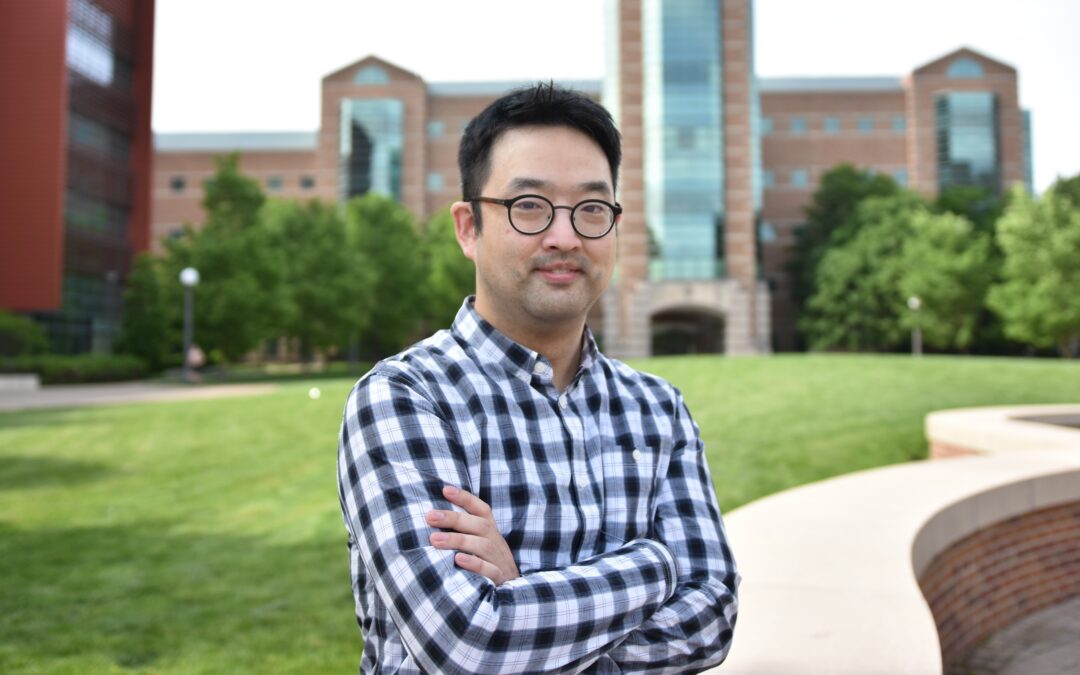 The word “fun” comes up a lot with CABBI’s Kisurb Choe.

Early on, back in South Korea, fun was chasing frogs, building dams, playing with Legos, or reading astronomy magazines from his dad.

At Rice University, it was the Tex-Mex food, the Houston Symphony, his beer-tasting class — even the hurricanes were interesting — and his research. Specifically, working with a bioreactor to grow yeasts and discovering how they can be useful for cosmetics, drugs, food, and other products. 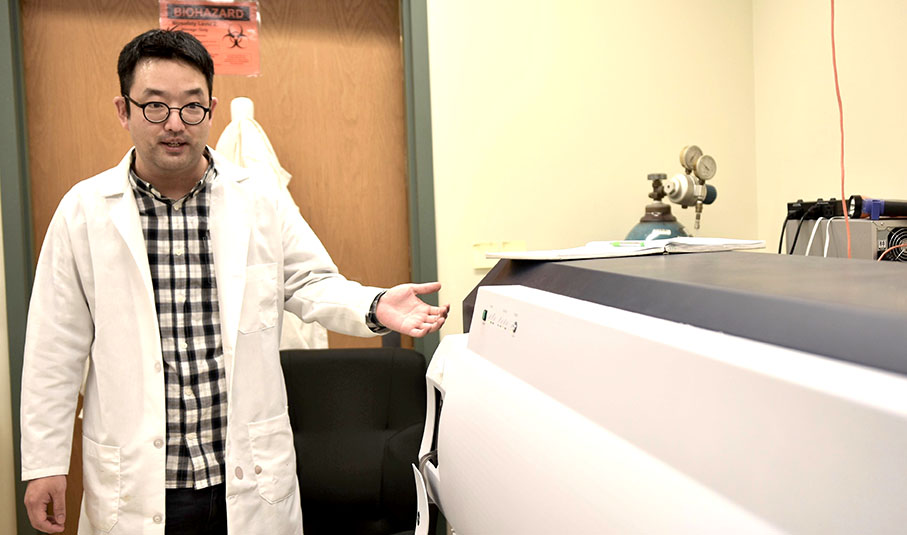 ABOVE: Kisurb Choe demonstrates the MALDI-MS system in the lab at the Beckman Institute at the University of Illinois Urbana-Champaign. TOP: Choe outside Beckman. Credits: Julie Wurth, CABBI Communications

Choe loves the work — specifically the opportunity to work with microbes and “trying random things, failing, and trying again. And I just like microbiology. I like tinkering. I like building things to do new types of experiments. I just like science.”

He’s been immersed in science from day one. Choe was born in California, where his mathematician father attended graduate school at the University of California-Berkeley, but the family moved back to South Korea when he was 4. Growing up in Po Hang, a rural area in southeastern Korea, young Kisurb spent a lot of time outside, fascinated with bugs, frogs, and other creatures. “I got stung by bees all the time,” he said.

His dad supplied him with Legos and science toys and regularly brought home copies of Newton and astronomy magazines. Science was a regular topic at the dinner table. “I was surrounded by science, and comfortable talking about science,” he said.

When it came time for college, Choe returned to the U.S. to major in biology at Rice. Outside of the “really great” Tex-Mex and his budding interest in classical music, “somehow what I remember the most is about all the hurricanes and the mosquitoes. Vicious mosquitoes,” he said. “It was fun.”

Several of his friends in a beer-brewing club had a mini-brewery in the basement of his dorm, which was “so cool,” Choe said. He took a beer-tasting class and soon was hooked on yeasts.

“I got interested enough that I chose my master’s thesis on yeasts based on that experience,” he said.

Choe pursued a master’s degree in biomanufacturing at North Carolina State University, where he worked on industrial-scale microbiology. He ran a 30-liter bioreactor, a large tank for growing yeasts, developing a technique for industrial production of proteins. He created an automated pump to feed yeasts, with a sensor activated by glycerol levels as the cells grew.

“I really liked seeing how yeasts could be useful. I had a lot of fun for my thesis,” he said.

He grew more and more interested in working on microbiology tools and chose Illinois for his Ph.D. because of its strengths in microbiology, chemistry, and chemical engineering. He was intrigued by Sweedler’s research in analytical chemistry — all the tools available, the opportunity to work with different labs on diverse projects — and his willingness to let students try out new ideas.

More recently, Choe led the development of software for an optically guided MS system that allowed the technology to be used anywhere via the web. From a photo of multiple samples taken with a conventional cell phone or scanner, the software provides image analysis to help the MS system target their positions. Previously, the MS imaging would have to evaluate every spot on a sample, taking much longer to cover a large area, Choe said.

“With this tool, the chemical analysis, it’s much, much faster,” he said.

The software was made into a web application so that anyone — CABBI affiliate or not — can adapt it quickly and easily. The platform software tool can be used for many different high-throughput screening processes. “It can be applied to anything visible – liquid droplets, microbial colonies growing in a lab, seeds spread on a surface.”

Beyond biofuel projects, the tool has potential applications on the medical and environmental fronts — and any task that requires analytical chemistry: checking a patient sample for pathogens, analyzing doping tests, or screening water samples for pollutants, for example. The automated process could make those procedures much faster and more efficient, he said.

Once he wraps up his Ph.D. work, Choe hopes to obtain a postdoctoral position in a university or national lab, or perhaps go into industry. He still visits his parents in South Korea when he can — usually fixing some technology issue while he’s home — but hopes to build his career in the U.S. 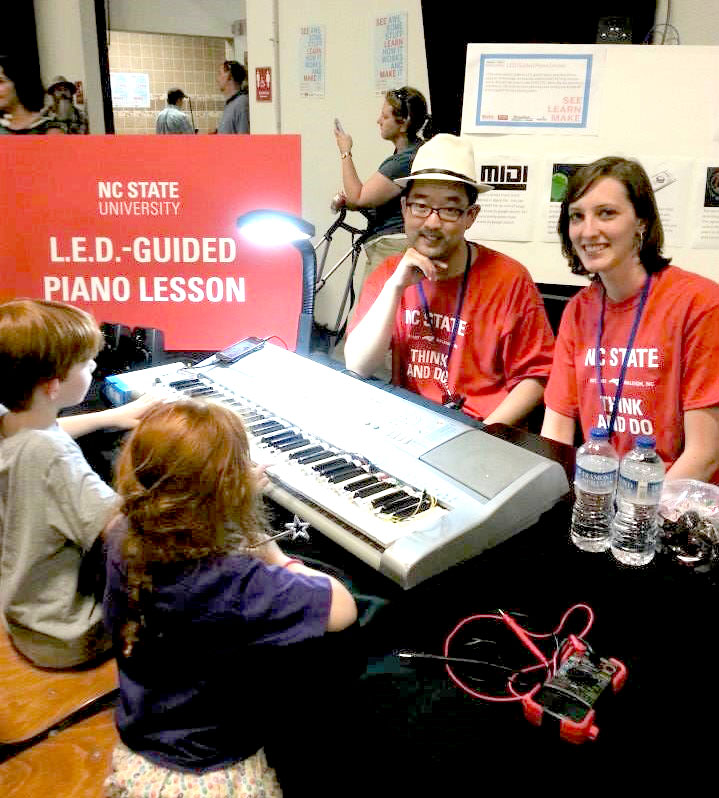 Also on the agenda: moving closer to his brother, Insurb Choe — a University of California-Irvine engineering graduate now in dental school at the University of Southern California — and his wife and three daughters (ages 6, 3, and 1). “They’re very cute,” Kisurb Choe said. “I send them Legos and toys all the time.”

In the meantime, he finds lots of ways to have fun in Illinois. That involves boating with friends at Lake of the Woods Forest Preserve or Crystal Lake Park on a rubber boat (with life vests). Or stargazing — a hobby he picked up long ago from his dad — at the C-U Observatory south of Willard Airport or the dark sky area at the Middle Fork Forest Preserve. And of course, building gadgets.

That particular interest was inspired by a huge maker fair Choe once visited in San Francisco, which “created this whole culture where people are very into building things.” He later built an LED-guided piano player for a maker fair in North Carolina. The system would turn lights on and off to indicate which piano keys to press; the repertoire included “Fur Elise” and “Twinkle, Twinkle, Little Star.” It was a hit with kids (and parents).

Choe credits that experience, in part, for his interest in programming and electronics, which turned out to be quite useful for his current research building tools for experiments.

“It taught me the mindset that I can build things, by whatever means necessary,” he said. And have fun doing it.