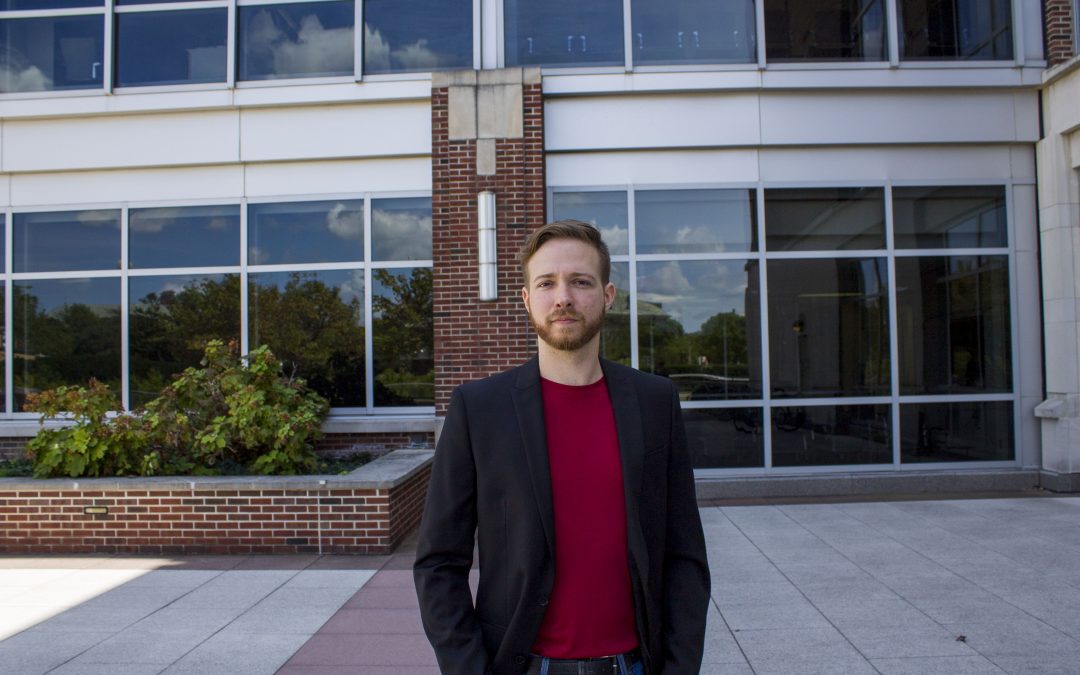 At his desk adjacent to the Morrow Plots, Hans Müller Paul is hard at work on his computer, developing software that aims to revolutionize biofuel research.

As he puts it, “The work that I’m doing is like a grain of sand in the desert. But everyone’s work makes the desert, in the end.”

Müller Paul is a Ph.D. Candidate in Matthew Hudson’s lab at the University of Illinois, working under CABBI’s Feedstock Production Theme. 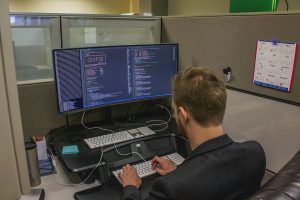 “I’ve been interested in biofuels from the beginning,” he said. Müller Paul grew up in Brazil, where the biofuel industry is booming. After earning his bachelor’s degree in Molecular Biology from the University of Campinas, he worked in the Brazilian National Lab for Biofuels, which is where he met his master’s advisor, leading him to come to the University of Illinois.

Müller Paul has been at Illinois for five years now.

“Culturally, being in the U.S. and being in Brazil are not that different,” he said. “It was pretty easy to blend in and get used to everything.”

The shift in scenery was what was most jarring, Müller Paul said: “I’m not a small city person. I’m from São Paulo, which is slightly larger than New York. And then I did my undergrad in Campinas, which is about the size of Chicago. And then I came here.”

While his master’s research focused on studying biomass deconstruction in the lab, Müller Paul is now invested in something very new to him: computational work.

“I switched areas to something I had never done before, and it was probably the most exciting thing I’ve done since college,” he said. “When I get to learn something new, the challenge is what keeps me going.”

And he is certainly tackling a big challenge: His Ph.D. work focuses on designing a software that will streamline CRISPR gene editing research for bench scientists. CRISPR gene editing is an exciting new method of altering an organism’s genome. Through the use of a CRISPR-associated protein, which cuts DNA — and a strand of guide RNA, which tells the CRISPR-associated protein where to cut — researchers can cause targeted breaks in a gene.

It might seem strange to want to break a gene, but researchers have a good reason to do so. By inducing these gene “knockouts,” they can stop the expression of that gene. Because plants are so complex, knocking out one gene often has a cascading effect and alters the regulation of many other genes and processes. Ultimately, finding the right gene to knock out could make plants more efficient and resilient. 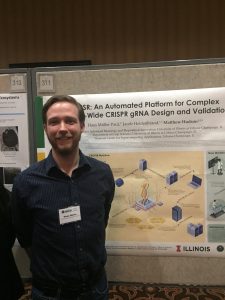 Before his switch to computational work at CABBI, Müller Paul worked as a bench scientist, and conducted research with genome manipulation. However, the process of gene editing with CRISPR is a long one:

“You start by selecting the gene you want to edit, and you go get its sequence in the database. Then, you either design the RNA guides yourself, or you run it through software to design and evaluate the guides for you. Once you’ve designed guides that correspond to the gene you want to edit, you have to order the guides. After they arrive, you’ll do your experiment, and do some kind of validation to make sure that the CRISPR gene editing actually worked.”

The validation process typically requires that you then design and order several more sequences corresponding to the gene you’re interested in.

“It takes a lot of time to do all this, and there’s a lot of variation in process between scientists and between softwares,” he explained. “Sometimes it’s not very efficient, and sometimes it’s hard to replicate.”

To remedy this, Müller Paul is taking the initiative and developing a software to streamline CRISPR gene editing.

“My main goal for the scientists is to have their work go faster and more seamlessly,” he said

Rather than operating on a per-gene basis like the other CRISPR softwares out there, his software operates genome-wide: “Instead of selecting individual genes, you just dump the entire genome. It designs everything in every possible position you can make an edit, with every CRISPR system. It designs the guides, it evaluates the guides, ranks them, selects the best ones for each gene, and designs the primers for validation. So basically, you click one button on the website, and it gives you everything you need.

“With that information, instead of spending hours planning everything, bench scientists can go and search for what they want to do, click, order everything, and then they can do the experiment with the peace of mind that everything has been done for them.”

The first version of Müller Paul’s software is currently only accessible to researchers affiliated with the Carl R. Woese Institute for Genomic Biology for testing. Soon, it will be available to anyone and everyone for free. The software already features 70 million guide sequences and the entire sorghum genome.

Using this software to streamline the process, CABBI researchers are studying some of the genes that are thought to be related to the production of oils and other value products in plants. Their hope is that by knocking out some of these genes, they will change the levels of other related genes, causing a cascade effect that ultimately improves the plant’s efficiency or resilience.

Creating such a software isn’t just as easy as writing a few lines of code.

“It’s a lot more work than it looks,” Müller Paul said. “There are a lot of steps we don’t see.” 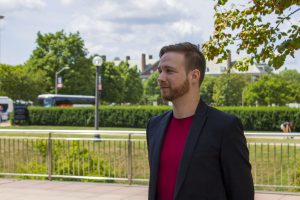 When he first started his computational work, he had a lot to learn.

“There are a lot of things you need to learn by yourself. Especially being a Ph.D. student, people expect you to have a certain level of knowledge, but it’s a completely new area for me, so I have to go after the information myself.”

And go after information he did. Driven by the new challenge before him, Müller Paul delved into the fine details of computational work. As he describes it, “I just sit there with my headphones, forget the world exists, and do my stuff.”

Outside of his work with CABBI, Müller Paul is a consultant for Illinois Business Consulting (IBC). He’s also a musician: He plays guitar, and used to sing with the symphonic orchestra in Campinas.

At its core, scientific research is a collaborative process. Although the thought of feedstocks typically evokes the image of researchers working directly with crops in the field, there are many other sides to this research, and many other ways to contribute to the field.

“Science is about sharing. It’s not about the discoveries,” he said. “The discoveries don’t mean anything if no one can use them.”