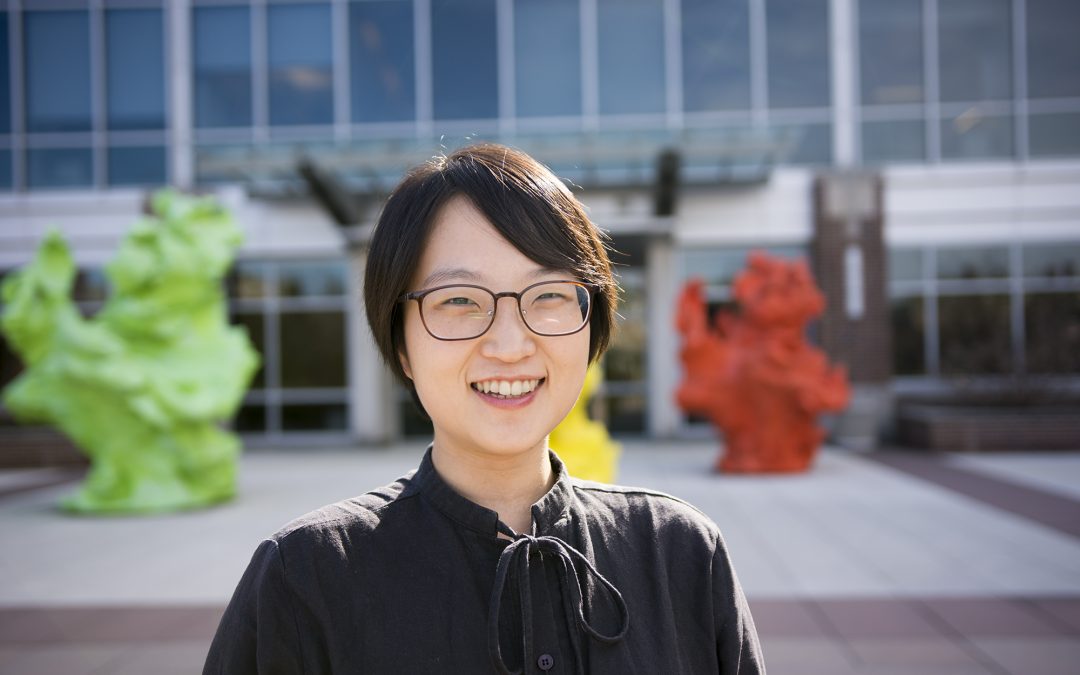 Deconstructed dishes are all the rage these days. Whether it’s a salad, stew, or a piece of sushi, people love to take things apart and indulge in each individual ingredient. But a deconstructed chemical reaction? That’s the domain of CABBI Conversion researcher Danim Yun.

When Yun and her young family moved to Champaign-Urbana in spring 2019, they squeezed in only a year’s worth of sightseeing before the town shut down due to the COVID-19 pandemic. But even with the quarantine testing the limits of Yun’s self-described introverted nature, she has never felt professionally isolated; the Flaherty Lab group at the University of Illinois has supported her every step of the way. 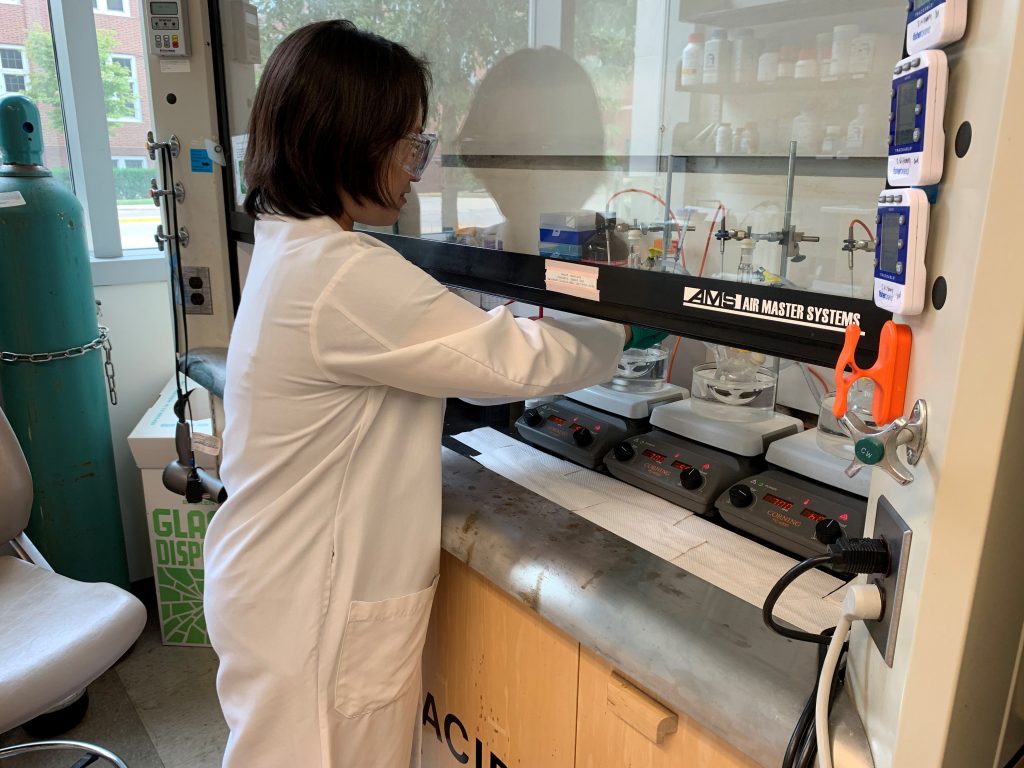 Yun has been a CABBI Postdoctoral Researcher at the University of Illinois Urbana-Champaign for two years, after she received a Ph.D. in Chemical Engineering from Seoul National University in South Korea. She studied chemical catalysis, the process of optimizing a chemical reaction by isolating and analyzing the components that make it work.

After living her entire life in South Korea, Yun felt drawn to pursue a position in the United States.

“There were so many technological advancements happening here. I was driven by a desire to learn from the experts, and I knew that David Flaherty was a leading scientist in his field,” she said.

Now, Yun is a scientist in Flaherty’s lab group within CABBI’s Conversion Theme. Working out of the Carl R. Woese Institute for Genomic Biology, this group tackles the task of unpacking chemical reactions; by closely inspecting every component, paying attention to every pathway, and scrutinizing each process, they’re able to engineer the most desirable reaction possible.

“When a reaction occurs, there are many moving parts: a reactant, an oxidant, a catalyst, an intermediate, et cetera,” Yun said. “All of these elements can affect the rate of the reaction. If there is too much reactant, for example, then the rate of the reaction can either be significantly lowered or significantly increased. Ultimately, we’re looking at how everything impacts each other, and we’re using this knowledge to propose new networks, new pathways for the reactions.”

It’s the chemical equivalent of isolating all of a recipe’s ingredients to make sure they work together to create the most flavorful dish. Too salty? Use a pinch less salt. Undesirable reaction rate? Alter the catalytic environment or change the “recipe.”

So, which “ingredients” does Yun start with, and which end products does she strive to synthesize?

Because CABBI’s mission is to create viable bioproducts from plants, Yun’s building blocks consist of the agricultural feedstocks CABBI cultivates at locations like the Illinois Energy Farm. Unsaturated fatty acids extracted from plants are used as reactants: the material that undergoes a change during the chemical reaction. Using bio-based rather than synthetic reactants is a bonus for Yun; while she did not intend to pursue environmental research, she appreciates that CABBI’s work advances cutting-edge science and global sustainability all in one.

“Scientific advancement can be very good for people, but it also has its risks,” she said. “We need to be clever, conscious stewards of the world we live in. Relying only on petrochemicals and fossil fuels is harmful for the environment, and biomass conversion through chemical catalysis can help protect nature.”

In the following steps of the chemical catalysis “recipe,” fatty acids are joined by hydrogen peroxide and other inorganic materials to ultimately form diacids (e.g., azelaic acid), building blocks for bio-based lubricants, polymers, and plastics. Yun works on CABBI’s “TAG team,” a research cohort focused on extracting and upgrading triacylglycerol (TAG). In addition to having a direct use as a biofuel, TAG can be used to make diacids.

“Diacids are difficult to obtain from petroleum-based compounds, but we can easily synthesize it from bio-based unsaturated fatty acid. This process is much greener than the norm,” she said. 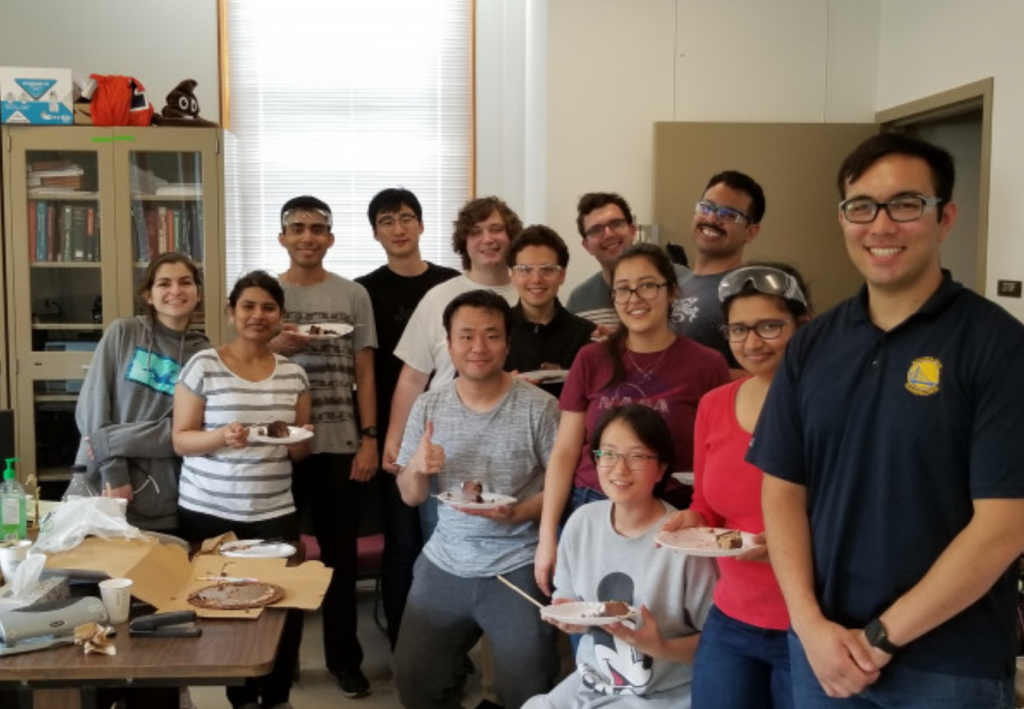 Danim Yun, seated, celebrates with other members of her lab group at a birthday party in May 2019. Credit: Flaherty lab

According to Yun, the TAG Team is not only academically prolific, but personable and supportive. They’ve been a constant source of motivation and inspiration during Yun’s time at the university.

“Last week, I was presenting my CABBI work in a meeting, and my lab member posted the meeting to Twitter and a CABBI administrator said, ‘Go, Danim!’ It made me laugh, but more importantly made me remember how this team has my back,” Yun said.

When not in the lab, she changes gears from the chemical to the culinary. She spends time whipping up delicious dishes inspired by her relatives and the cookbooks she peruses in her free time.

“The recipes get better every time I try them — I have to work on them to continuously improve,” Yun said.

The same goes for her work in the lab, which is defined by constant repetition and a steady stream of minute adjustments. She is guided by precision — and the phrase “try, try again.”

Whether she’s unpacking a complex chemical reaction or perfecting a family recipe, she’s not afraid to do some light deconstruction.