Dalton Stewart: Economics and Environment both Vital to Sustainability 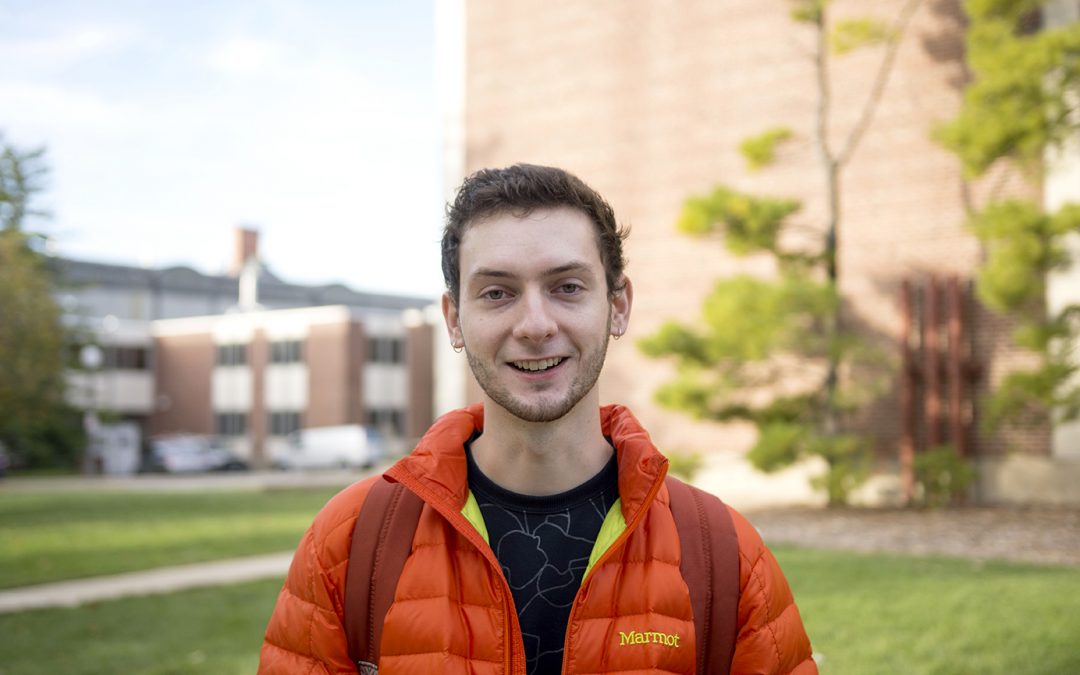 Well, not quite “Boy Scout” — Stewart’s formative years were devoted to an organization called 4-H. “Sort of like Boy Scouts, but with animals,” he said.

Now a CABBI Sustainability researcher, Stewart’s adolescent affinities for farms and fauna are a given. But his fascination with agricultural sustainability took on a new layer of nuance when he entered middle school and began learning about the pollution (e.g., chemical runoff, water contamination, and greenhouse gas emissions) associated with farming.

“In eighth grade, I distinctly remember talking about climate change for the first time,” he said.

And that was it: From there on out, Stewart’s interest in sustainability only grew.

Stewart attended Bucknell University for his undergraduate studies in environmental engineering. With a population nearly six times greater than his hometown, the Lewisburg campus is where his passion for sustainable policy-making really took off.

Of particular interest to Stewart was the process of life cycle assessment (LCA).

“With LCA, you can assess the environmental impacts of a product or process, and then compare various options to see which has the greatest effect on the environment. I thought it was interesting at the time, and I’m able to apply that knowledge to my current project with CABBI,” he said.

In Fall 2019, Stewart began his graduate studies at the University of Illinois at Urbana-Champaign, where he is pursuing his M.S. in Environmental Engineering and working with Jeremy Guest, a fellow Bucknell alumnus. Currently, the Guest Lab is developing BioSTEAM (Biorefinery Simulation and Techno-Economic Analysis Modules), an open-source software to evaluate the environmental impact of biorefineries: facilities that convert agricultural feedstock into organic bioproducts like ethanol. Built in Python, the agile simulation tool helps scientists and other stakeholders analyze the economic and environmental impact of producing bioproducts. Read more about the project, and the Guest Lab team, here >>>

While LCA factors into BioSTEAM, Stewart’s role is LCA-adjacent; his contribution comes from the side of economic — rather than life cycle — analysis.

“BioSTEAM is already working toward environmental sustainability. We want it to evaluate economic sustainability as well,” he said.

Currently in the literary review phase of his research, Stewart investigates the myriad of monetary incentives tied to biorefinery construction in the United States: Where are the most efficient (or, alternatively, cost-prohibitive) locations to build a biorefinery, and how can these facilities secure the optimal return for what they generate based on legislation specific to their state?

Future biorefineries are likely to produce electricity on-site as a byproduct of the feedstock-to-biofuel conversion process, either by producing and combusting methane from waste organics or by burning residual biomass directly. These mechanisms typically generate sufficient electricity to support the facility itself — and often produce a surplus. Selling excess electricity back to the grid would allow biorefineries to market their biofuels and bioproducts at a lower price, ultimately increasing the market viability of sustainable fuels. However, some states have limitations or guidelines for how electricity can be sold; that’s where Stewart’s research proves invaluable.

The situation is similar regarding biofuel and bioethanol production, he said. In certain states, generating biofuels can enable producers to access tax credits, monetary incentives, or reduced property taxes on the land supporting the biorefinery.

With the data compiled from his research, Stewart can create a “techno-economic analysis package” to include directly in BioSTEAM — users will have the tools to make informed economic decisions right at their fingertips. Ultimately, it’s all about ensuring that biorefineries can operate sustainably in more ways than one, shifting the bioeconomy toward practices with positive environmental and economic outcomes.

While his work at this moment is focused on the literary context for BioSTEAM, he has a desire to “make a difference, educate (myself) on the most important environmental issues, and figure out how (I) can save the world.”

When it comes to world-saving, BioSTEAM is more than a running start.

“Way down the road, this project will have repercussions that reduce climate change — that’s what it’s meant for,” Stewart said. “This BioSTEAM package will hopefully be used by renewable energy developers or people who are interested in creating biorefineries to produce ethanol, which will be used for a renewable fuel, which will replace fossil fuels.”

Climate change is of particular interest to Stewart, who is pursuing an Energy and Sustainability Engineering (EaSE) Certificate and taking coursework in Sustainable Urban Systems and Energy Economics to improve his fluency in environmental best practices and ultimately prepare himself to enact change on the grandest possible stages.

In addition to drafting policy, he believes in the power of simply being conscientious and caring — especially regarding environmental action.

“If I could, I’d advise folks to take greater consideration of the environment, and of their fellow human beings, when they go about their daily lives,” he said. “There’s a disconnect now. You can flip on a light switch without thinking about how that electricity is being generated. Coal is being burned somewhere to power that light switch. Air pollution is being generated, which of course ties back to climate change. And there are a lot of similar parallels.”

In the 4-H creed is written a pledge for “higher service.” From his farming roots to his current crusade against climate change and for positive environmental change, Stewart is honoring his boyhood Pennsylvanian promise through research, education, and passion.