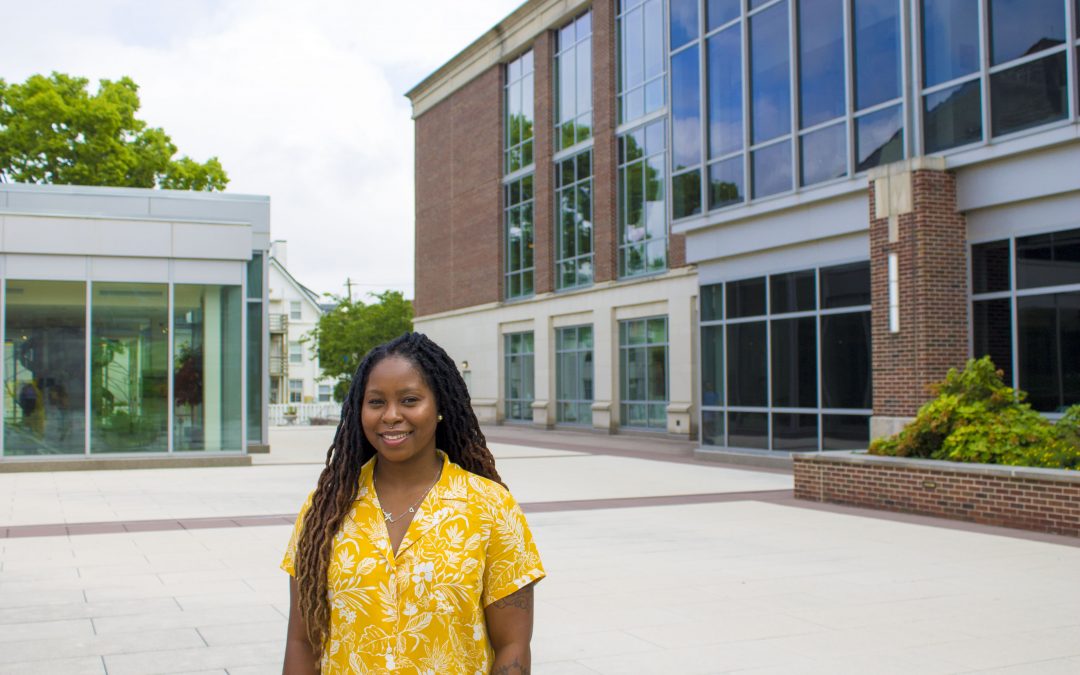 Christy Gibson is as comfortable with words as she is with lasers. As a two-time novelist and CABBI Sustainability postdoctoral researcher, she deals with both on a daily basis.

Born and raised in the Bahamas, Gibson was well into a baccalaureate program when she decided to take her educational journey from Nassau to Nashville.

“I felt pretty stagnant,” Gibson said. “The opportunities to advance in the Bahamas were very limited at that time. …There was no way to differentiate yourself.”

At Tennessee State University, Gibson studied chemistry in conjunction with biology through a unique professional degree program. She blended her STEM concentration with an English minor to unite her passions for writing and research. 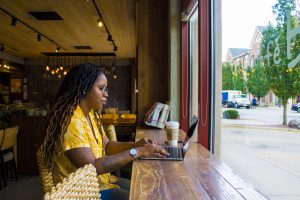 Gibson enjoys writing — both academically and creatively — at the Caffé Bene on campus.

Instead of deciding between science and creative writing, Gibson remained loyal to both. By day, she channeled her love for lab-based research into a plant and soil science Master’s; by night, she poured time and energy into authoring two novels that she one day hopes to publish. Always looking to expand her skill set, Gibson set her doctoral sights on Purdue University’s interdisciplinary graduate program.

“I had a very mixed background, and I wasn’t totally focused on one thing. I thought: ‘How do I fit in all of these things that I’ve done? I have a bit of English language and literature, I have chemistry, biology, plant and soil science — what do I do with this?’ ”

At Purdue, Gibson studied everything from anthropology to ecology to black carbon, all of which influenced her Ph.D. in Ecological Sciences and Engineering (ESE). In combination with her scientific versatility and interdisciplinary background, Gibson’s doctoral research on the effects of natural fire products (char) on belowground carbon (C) and nitrogen (N) cycling in forest ecosystems was instrumental to her next move: CABBI.

Since February 2019, Gibson has been a member of the Center’s Sustainability theme, where her work with the Carl Bernacchi Lab takes place at the groundbreaking “nexus of food and energy security.” At the University of Illinois, Gibson studies C and N cycling above- as well as belowground, and in bioenergy fields instead of forests. Her goal? To measure greenhouse gas levels across the entire ecosystem — from soil to bioenergy crops to the atmosphere.

When Gibson heads to the lab, she’s interested in uncovering three things: what the concentrations of the greenhouse gases carbon dioxide and nitrous oxide are at any given time; where the highest and lowest levels occur; and how that information can be leveraged to enhance the ecosystem’s health.

“This information can tell us a bit about the relationship between plants and soil, and can help inform our local and regional C and N budgets,” she said. 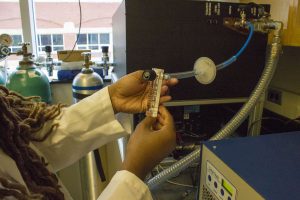 Instead of small growth chambers and test tubes, Gibson has real-world agricultural sites at her disposal. To collect isotope data, Gibson operates a Quantum Cascade Dual Laser System (QCL). The system is a spectrometer — it measures light wavelengths.

“(The QCL) constantly sucks air into a tube,” Gibson explained, “and the lasers are continuously tuning or adjusting themselves over a very specific range of infrared wavelengths. This range is where we expect our target molecules CO2 and N2O to absorb or emit light energy. It’s kind of like trying to pick out and count every person wearing a CABBI T–shirt in the crowd at an Illini football came. You’d have to continuously scan the crowd to be sure you didn’t miss anyone.”

The stakes for Gibson’s research are high: as bioenergy crops emerge as a key source for alternative, sustainable fuel, it’s important to keep those crops and their fields as resilient as possible. But Gibson isn’t just concerned with scientific discovery — she’s also committed to communicating her work in a way that’s accessible for all.

“(Scientists are) seen as gatekeepers of information,” she said. “If you keep the gate closed, that makes people feel excluded. Have you ever walked by a place and there’s a giant fence, and you can’t see in or around it, there’s a lock on the door, and you keep seeing people going in and out — immediately you become suspicious.

“I’m constantly looking for ways to explain what I do at a fifth-grade level. It’s all about removing your ego from the process.”

Gibson’s commitment to inclusion and barrier-breaking inspired her to spearhead Women in CABBI, an organization that debuted at CABBI’s 2019 Annual Retreat. Women in CABBI aims to create a safe space for female-identifying folks to share experiences and host critical, intersectional discussions.

Gibson is excited about the positive change that could arise as a result of Women in CABBI:

“If you foster an environment where people can discuss things more openly,” Gibson said, “then things won’t be stigmatized to the point where they form a barrier to communication.” 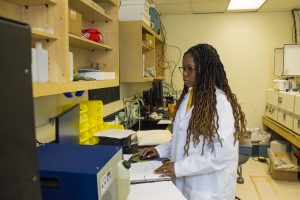 When not at work, Gibson follows her creative roots to the library in search of fresh reading material. Anything is fair game — from creative nonfiction to scientific journals (as long as they’re different from her own research!) to the “histories of mundane things.” Her mode of selection? Judging books by their covers.

“My favorite way to find something new to read is looking at book covers,” she said. “I’ve never been wrong yet! I look at interesting covers, and if something speaks to me, I pick it up.”

It’s easy to see why she is a self-proclaimed interdisciplinary scientist. Her roles as an innovative biogeochemist, prolific writer, and conscious communicator have resulted in a unique tool belt consisting of everything from poetry and podcasts to lasers and lab equipment.

As time goes on, it’s clear that this “Renaissance scientist” will use her talents to make positive change in CABBI and beyond.