Investigating the Role of Transcriptional Regulator Ure2 on the Metabolism of Saccharomyces cerevisiae: A Multi-Omics Approach 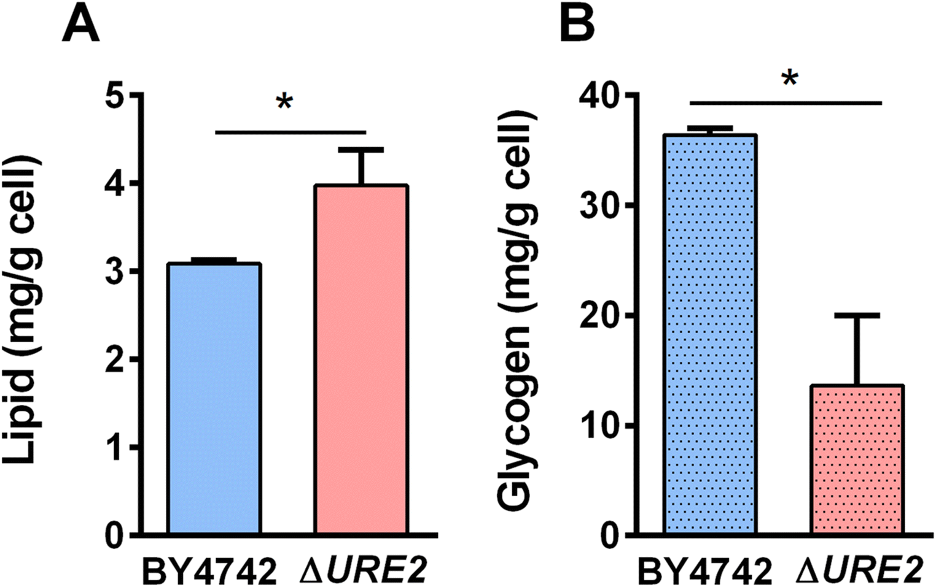 Ure2 regulates nitrogen catabolite repression in Saccharomyces cerevisiae. Deletion of URE2 induces a physiological state mimicking the nitrogen starvation and autophagic responses. Previous work has shown that deletion of URE2 increases the fermentation rate of some wine-producing strains of S. cerevisiae. In this work, we investigated the effect of URE2 deletion (ΔURE2) on the metabolism of S. cerevisiae. During growth on glucose, the ΔURE2 mutant grew at a 40% slower rate than the wild type; however, it produced ethanol at a 31% higher rate. To better under the behavior of this mutant, we performed transcriptomics and metabolomics. Analysis of the RNA sequencing results and metabolite levels indicates that the mutant strain exhibited characteristics of both nitrogen starvation and autophagy, including the upregulation of allantoin, urea, and amino acid uptake and utilization pathways and selective autophagic machinery. In addition, pyruvate decarboxylase and alcohol dehydrogenase isoforms were expressed at higher rates than the wild type. The mutant also accumulated less trehalose and glycogen, and produced more lipids. The induction of a nitrogen starvation-like state and increase in lipid production in nitrogen-rich conditions suggest that URE2 may be a promising target for metabolic engineering in S. cerevisiae and other yeasts for the production of lipids and lipid-derived compounds.