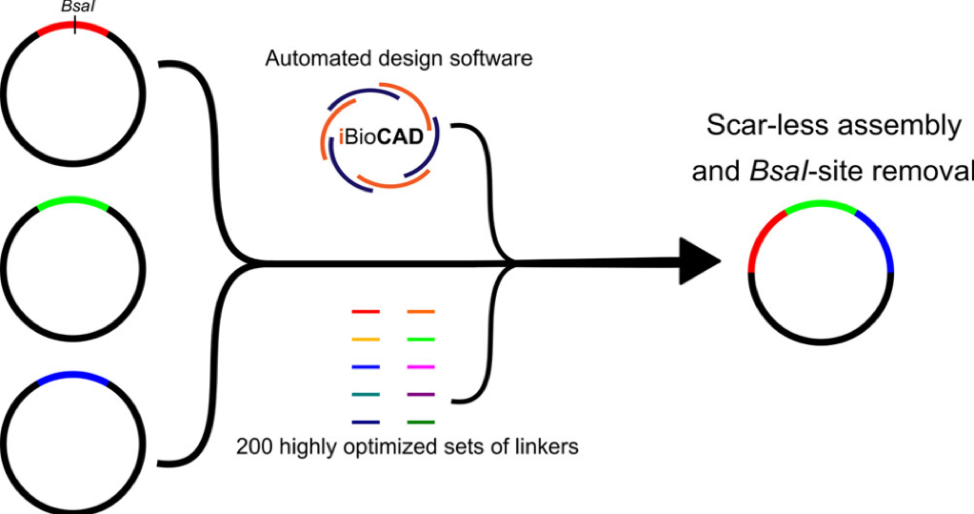 iBioCAD GGA recommends linkers from a set of 200 optimized linker sets based on fragment sequences and allows for BasI-site removal and scarless ligation via one-pot Golden Gate assembly.

Golden Gate assembly is one of the most widely used DNA assembly methods due to its robustness and modularity. However, despite its popularity, the need for BsaI-free parts, the introduction of scars between junctions, as well as the lack of a comprehensive study on the linkers hinders its more widespread use. Here, we first developed a novel sequencing scheme to test the efficiency and specificity of 96 linkers of 4-bp length and experimentally verified these linkers and their effects on Golden Gate assembly efficiency and specificity. We then used this sequencing data to generate 200 distinct linker sets that can be used by the community to perform efficient Golden Gate assemblies of different sizes and complexity. We also present a single-pot scarless Golden Gate assembly and BsaI removal scheme and its accompanying assembly design software to perform point mutations and Golden Gate assembly. This assembly scheme enables scarless assembly without compromising efficiency by choosing optimized linkers near assembly junctions.

Table S7 (16 KB): The list of 200 sets of optimized linkers with different sizes. The sets with smaller sizes have higher efficiency and specificity and should be used when possible. Larger sets should only be used if the linkers in the smaller sets are not suitable for the specific assembly.