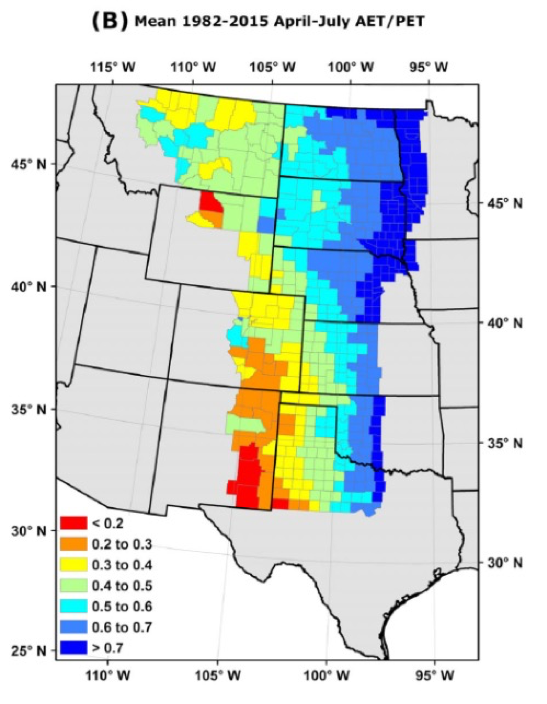 Productivity throughout the North American Great Plains grasslands is generally considered to be water limited, with the strength of this limitation increasing as precipitation decreases. We hypothesize that cumulative actual evapotranspiration water loss (AET) from April to July is the precipitation‐related variable most correlated to aboveground net primary production (ANPP) in the U.S. Great Plains (GP). We tested this by evaluating the relationship of ANPP to AET, precipitation, and plant transpiration (Tr). We used multi‐year ANPP data from five sites ranging from semiarid grasslands in Colorado and Wyoming to mesic grasslands in Nebraska and Kansas, mean annual NRCS ANPP, and satellite‐derived normalized difference vegetation index (NDVI) data. Results from the five sites showed that cumulative April‐to‐July AET, precipitation, and Tr were well correlated (R2: 0.54–0.70) to annual changes in ANPP for all but the wettest site. AET and Tr were better correlated to annual changes in ANPP compared to precipitation for the drier sites, and precipitation in August and September had little impact on productivity in drier sites. April‐to‐July cumulative precipitation was best correlated (R2 = 0.63) with interannual variability in ANPP in the most mesic site, while AET and Tr were poorly correlated with ANPP at this site. Cumulative growing season (May‐to‐September) NDVI (iNDVI) was strongly correlated with annual ANPP at the five sites (R2 = 0.90). Using iNDVI as a surrogate for ANPP, we found that county‐level cumulative April–July AET was more strongly correlated to ANPP than precipitation for more than 80% of the GP counties, with precipitation tending to perform better in the eastern more mesic portion of the GP. Including the ratio of AET to potential evapotranspiration (PET) improved the correlation of AET to both iNDVI and mean county‐level NRCS ANPP. Accounting for how different precipitation‐related variables control ANPP (AET in drier portion, precipitation in wetter portion) provides opportunity to develop spatially explicit forecasting of ANPP across the GP for enhancing decision‐making by land managers and use of grassland ANPP for biofuels.