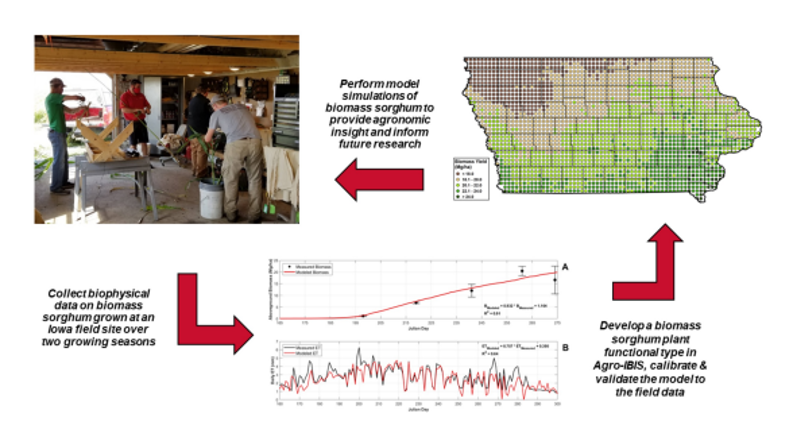 The flow of data and activities used to generate, calibrate, evaluate, and extrapolate the Agro-IBIS sorghum module and simulations.

Biomass sorghum (Sorghum bicolor L. Moench) is an annual C4 grass that has emerged as a candidate bioenergy crop but has not been widely grown in the United States. Corn (Zea mays L.), another annual C4 grass, has been produced on a large scale in the United States for biofuels. Iowa leads the nation in both corn and ethanol production. The high productivity of corn in Iowa creates the research question: could biomass sorghum be as or more productive than corn in the state in terms of bioenergy? Efforts to use crop models to fill the gaps left by field experimentation on biomass sorghum have also been limited thus far. To address our research question, we collected biophysical data on biomass sorghum grown in Iowa for two growing seasons, used them to develop a biomass sorghum module in an agroecosystem model (Agro-IBIS), and predict the potential performance of biomass sorghum across Iowa compared to maize. Despite dry conditions in 2019 and 2020, average biomass sorghum yields were 17.20 Mg ha−1. By comparison, average corn aboveground biomass was higher in 2020 (22.02 Mg ha−1). Soil cores indicated average belowground biomass of 1.46 Mg ha−1, with roots concentrated near the surface (73% of biomass above 50 cm in a 1 m core). When biomass sorghum model parameters were calibrated with measured values, model output was in close agreement with measured biomass (slope = 0.932, R2 = 0.91) and evapotranspiration (slope = 0.757, R2 = 0.64). Subsequent regional simulations revealed a notable latitudinal gradient in biomass sorghum yield, with a strong linear relationship between yield and seasonal growing degree-days (R2 = 0.89). When these yields were compared to simulated corn aboveground biomass yields, only 3.4% of the state had biomass sorghum yields that were significantly higher than corn. This number was reduced to 0.3% when comparing the crops in terms of energy ethanol yield. Thus, we conclude biomass sorghum must be improved to be competitive with corn as an annual biofuel crop in Iowa. This study provides a baseline against which to compare advancements in sorghum breeding for biomass and stress tolerance in Iowa.