A Genetic Toolbox for Metabolic Engineering of Issatchenkia orientalis 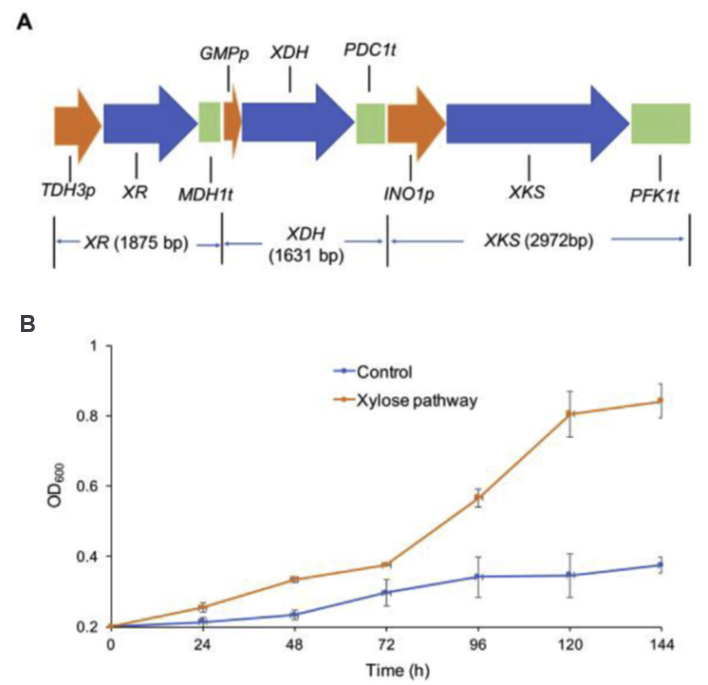 These new tools were used to construct a xylose utilization pathway in I. orientalis (A), which resulted in improved growth on xylose (B).

The nonconventional yeast Issatchenkia orientalis can grow under highly acidic conditions and has been explored for production of various organic acids. However, its broader application is hampered by the lack of efficient genetic tools to enable sophisticated metabolic manipulations. We recently constructed an episomal plasmid based on the autonomously replicating sequence (ARS) from Saccharomyces cerevisiae (ScARS) in I. orientalis and developed a CRISPR/Cas9 system for multiplexed gene deletions. Here we report three additional genetic tools including: (1) identification of a 0.8 kb centromere-like (CEN-L) sequence from the I. orientalis genome by using bioinformatics and functional screening; (2) discovery and characterization of a set of constitutive promoters and terminators under different culture conditions by using RNA-Seq analysis and a fluorescent reporter; and (3) development of a rapid and efficient in vivo DNA assembly method in I. orientalis, which exhibited ~100% fidelity when assembling a 7 kb-plasmid from seven DNA fragments ranging from 0.7 kb to 1.7 kb. As proof of concept, we used these genetic tools to rapidly construct a functional xylose utilization pathway in I. orientalis.

Table S2: Genetic elements/DNA sequences used in this study including promoters and terminators