Ayman Eid: Gene Editing for All 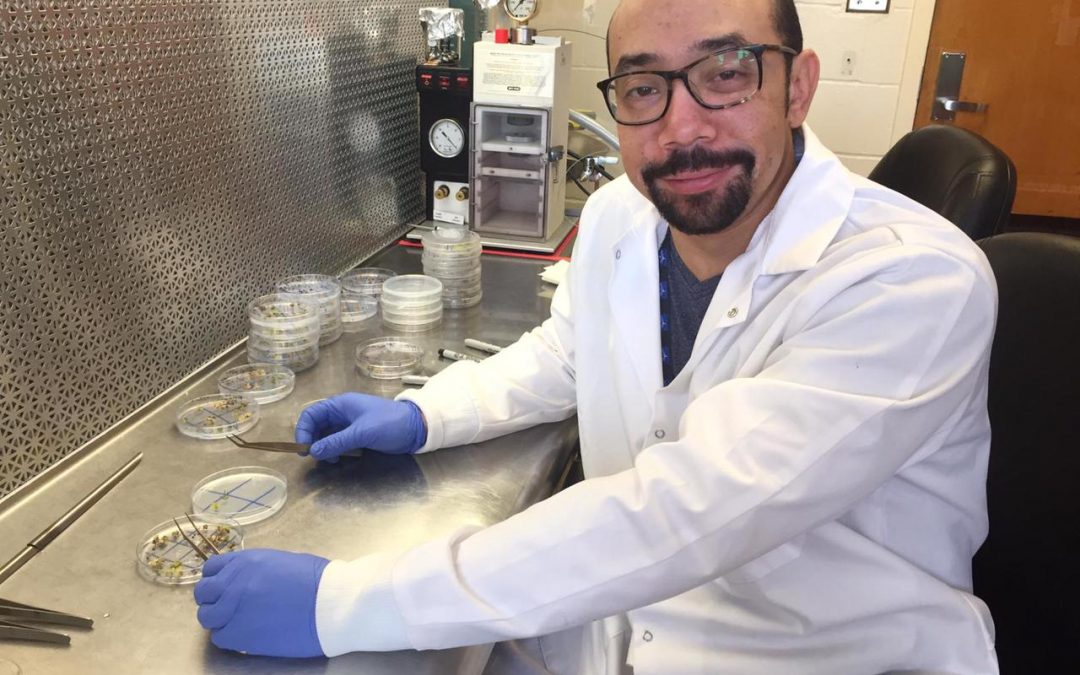 In an incredible collaboration between scientists across the country, CABBI is developing a new source of sustainable oil: a genetically altered variant of sugarcane dubbed “oilcane.”

Working with an organism as genetically complex as sugarcane is no easy feat, but CABBI researcher Ayman Eid is developing gene-editing platforms that will allow scientists to modify the sugarcane genome with ease and efficiency.

Eid became interested in biology and genomics in high school. Several of his older friends were pursuing biotechnology in college, which led him to do the same.

“I didn’t expect it to be that nice of a field,” Eid said. “My understanding was so superficial at the beginning, but once I got into the school, I started to discover more and more aspects that I came to like.”

Eid completed his bachelor’s degree in agricultural biotechnology in Cairo, Egypt, in 2009. After that, he joined the American University in Cairo for his master’s in biotechnology, where he studied bacterial enzyme adaptations present in harsh environments like brine pools. Enzymes typically break apart in extreme environments, but these bacterial enzymes were highly heat- and salt-tolerant, making them interesting study molecules. 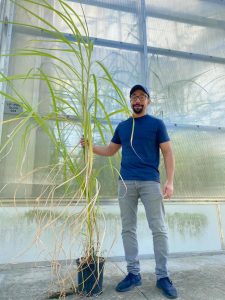 Eid stands alongside a genetically modified sugarcane plant. He used CRISPR/Cas9 to target the genes responsible for chlorophyll production, so a plant with less “green” indicates that the nuclease he selected efficiently edited the correct genes.

When Eid graduated, he joined King Abdullah University of Science and Technology, where he completed his Ph.D. in bioscience and studied gene editing and synthetic biology. He worked on developing and improving gene-editing platforms in eukaryotes, particularly CRISPR/Cas9.

In 2019, Eid joined Fredy Altpeter’s Lab at the University of Florida as a postdoctoral researcher, where he works on gene-editing platforms for sugarcane as a CABBI affiliate. Gene-editing systems like CRISPR/Cas9 are composed of two main components. The first is a nuclease, such as Cas9, which is an enzyme that cuts DNA. The second is a strand of guide RNA, which tells the nuclease where along the genetic sequence to cut. These systems allow researchers to make targeted changes in an organism’s genome with extremely high precision.

Editing the sugarcane genome is no easy task, however. It is massive and complex; 10 to 13 copies of each chromosome are present in every cell, and many functionally redundant genes are found throughout. Sugarcane can have up to 100 variants of a gene. It’s critical to understand how this complexity will impact the gene editing. This gives rise to the necessity for optimization in sugarcane gene-editing systems, a challenge Eid has risen to meet.

“I started with as many genetically distinct CRISPR/Cas system variants as I could find,” Eid said. “All of these variants will allow us to do different types of DNA modifications, from base pair addition and deletion to actually rewriting the genes.”

Eid decided to take advantage of sugarcane’s multicopy gene profile in order to evaluate the efficiency of different gene-editing techniques. He developed a rapid readout system that uses CRISPR/Cas9 to generate mutations in the chlorophyll synthesis gene, Magnesium Chelatase subunit I. This gives him a visible indicator of gene-editing efficiency — the amount of chlorophyll depletion in the resulting mutant plants can indicate the efficiency of the nuclease tested. Eid has published this work in Frontiers in Genome Editing.

This gene-editing system is a very powerful tool because it allows researchers to analyze elements like nucleases and guide RNAs. Eid is currently using it to test other Cas9 variants that could improve the targeting range of gene-editing systems and several new single guide RNAs (sgRNAs) in sugarcane.

In addition to improving the gene-editing system for sugarcane, Eid also works on editing genes in its oil-related pathways. He’s interested in genes that contribute to elevating triacylglycerol accumulation in roots, leaves, and stems. Triacylglycerol is a constituent of oil, so Eid is working toward knocking out sets of genes that will likely increase sugarcane’s triacylglycerol levels, bringing researchers one step closer to a sustainable source of oil in oilcane. 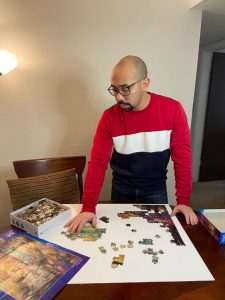 Eid enjoys solving puzzles inside and outside the lab! All credits: Ayman Eid

On an average day, there’s plenty of lab work to do.

“I design the gene-editing constructs, transform plant tissue, and then genotype or phenotype them to see if the transformation was successful,” Eid said. “If I’m not busy building new constructs with different nucleases or guiding RNA to target different genes, I am trying to analyze the plant that I have for genetic transformation. It may seem routine, but every new target we’re interested in editing helps us understand how sugarcane undergoes its DNA repair mechanism.”

For Eid, it’s both exciting and stressful to be part of such a rapidly evolving field.

“It can be very demanding work,” he said. “Once you get something working, you realize that there is another addition or a better way of doing it, because the field is so robust. Every week or so there is another breakthrough, or some new novel technique is developed. It can be stressful, but it’s also a privilege to be here in the middle of that.

“It’s actually very interesting how our current techniques, even just five years ago, were very challenging and costly. Nowadays, we’re able to do many things because of gene editing that we would not have even considered before. I feel very privileged and I look forward to the day we can make gene-edited agricultural products available to the average person.”

Down the line, Eid hopes that his lab and affiliated researchers will be able to get the most out of sugarcane gene editing and oil production. Understanding sugarcane’s complex genome and its DNA repair mechanisms is the first big step toward optimizing oilcane research.

“We should be proud that we are working with a very difficult crop like sugarcane,” he said. “I hope the lab gets bigger and bigger, and that we’ll get to produce these plants we’ve been working on. I’d love to see something I contributed to out in the market. Even if I’m not here when it happens, I hope that what I’m working on here makes it into the hands of someone who can realize its full potential, not just in the lab.”