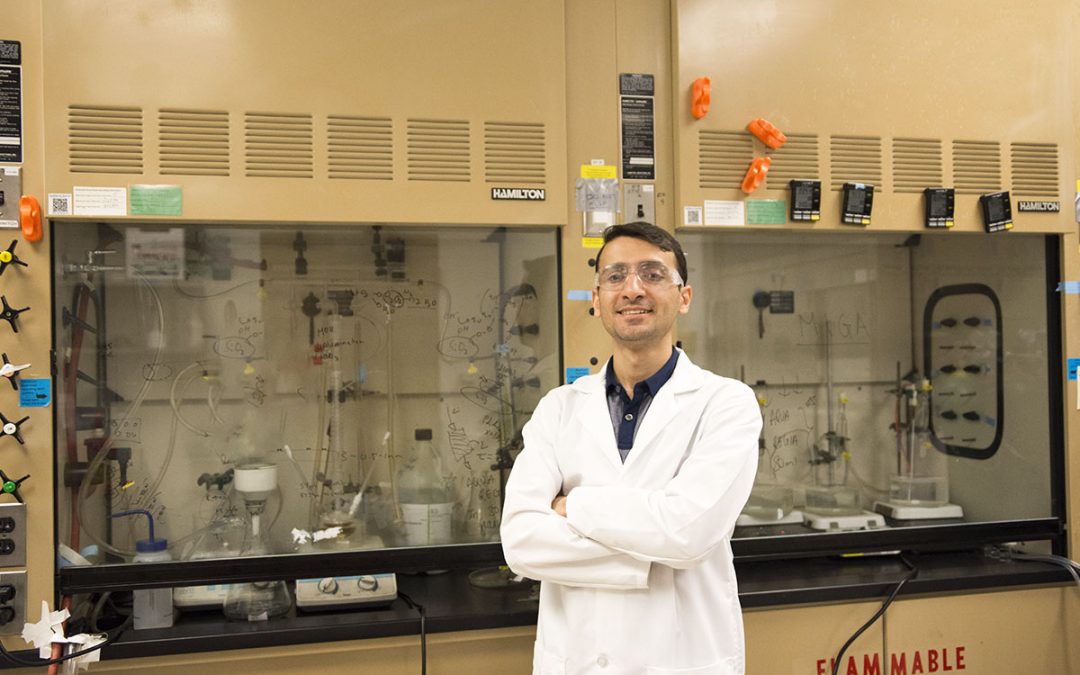 It comes as no surprise that Arian Ghorbanpour — an Institute for Sustainability, Energy, and Environment (iSEE) Postdoctoral Researcher for CABBI in the David Flaherty Research Group — has always been passionate about science.

When asked about his reasoning for pursuing science professionally, Ghorbanpour’s answer is immediate:

“The curiosity to discover unknown things, and the flexibility that lies in science. It has to do with new questions, new problems, and discovering new things — and that’s very exciting to me.” 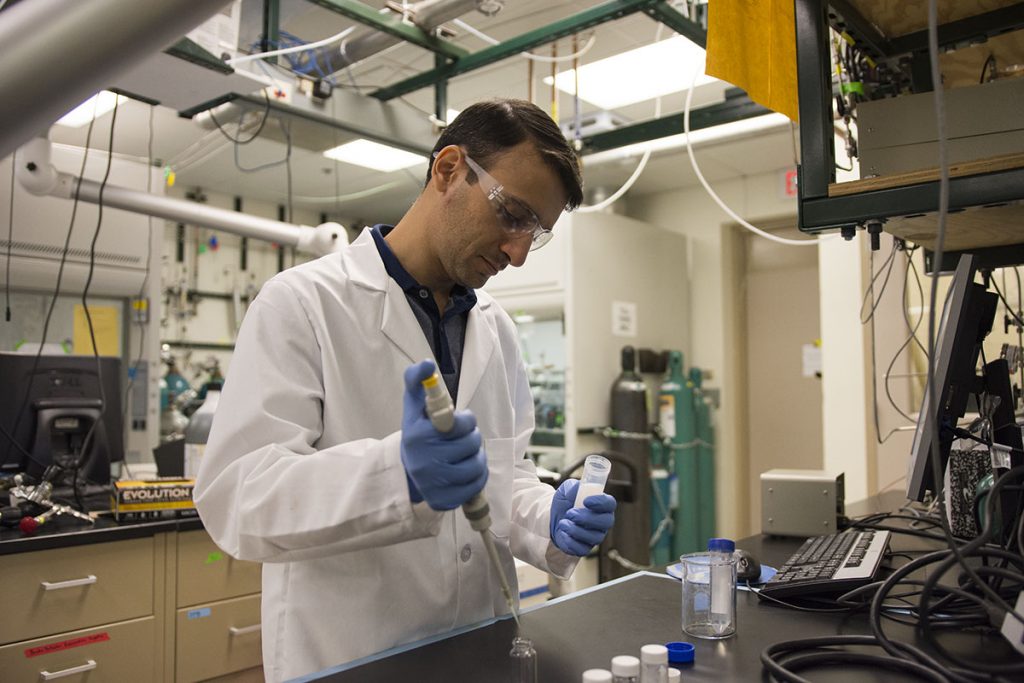 His passion for discovery has not only manifested in his academic pursuits, but in his personal life as well. Recently, he traveled intercontinentally and called four different locations home in a very short span. This naturally demands a great deal of flexibility and provides endless avenues for adventure.

Still relatively new to CABBI and the University of Illinois, Ghorbanpour expresses excitement for the opportunity to explore research with which he never anticipated being involved. Particularly, the intersection between chemical engineering and sustainability.

“Green chemistry is an important subject in our field,” he remarks, “and being able to make contributions in that area is very valuable.”

Currently, Ghorbanpour works in CABBI’s Conversion theme, which aims to increase biomass’ feasibility as a raw material for the production of valuable chemicals and organic compounds. Given Ghorbanpour’s description of chemical engineering as the art of “processing raw materials to create new products,” this endeavor falls right into his wheelhouse.

Ghorbanpour devotes most of his time to catalysis, the nuanced process of catalyst creation and use. A chemical reaction consists of several reactants (the starting materials), which react to produce a yield (the finished product/s). Catalysis, Ghorbanpour’s area of expertise, adds a third element to this equation — the catalyst — which enhances a reaction’s speed and selectivity. “Selectivity” refers to the ratio of desirable products to undesirable products formed by the reaction. Better explained:

“If we have products A, B, and C, and the desired product is B, what changes to the catalyst will increase the concentration of Product B with respect to the things that we don’t want?” Ghorbanpour says.

What exactly are the components of these reactions, and what type of product is he aiming to produce?

As a whole, one of CABBI’s missions is to use biomass to produce alcohols like ethanol (often referred to as bioethanol). The Conversion theme utilizes chemical catalysts manufactured in-house to convert small chemicals like bioethanol into other, higher-value chemicals — like fuels, alcohols, and lubricants — that can be broadly distributed to consumers.

In this case, the biomass materials serve as reactants, and high-value chemicals as the products; the chemical catalysts are up to Ghorbanpour and his team to create. His day-to-day tasks are divided into two categories. The first is synthesis and characterization. This consists of internally creating and characterizing catalysts for the team’s specific conversion needs. Think about an artist hand-mixing paint to ensure that the color fits his exact specifications: 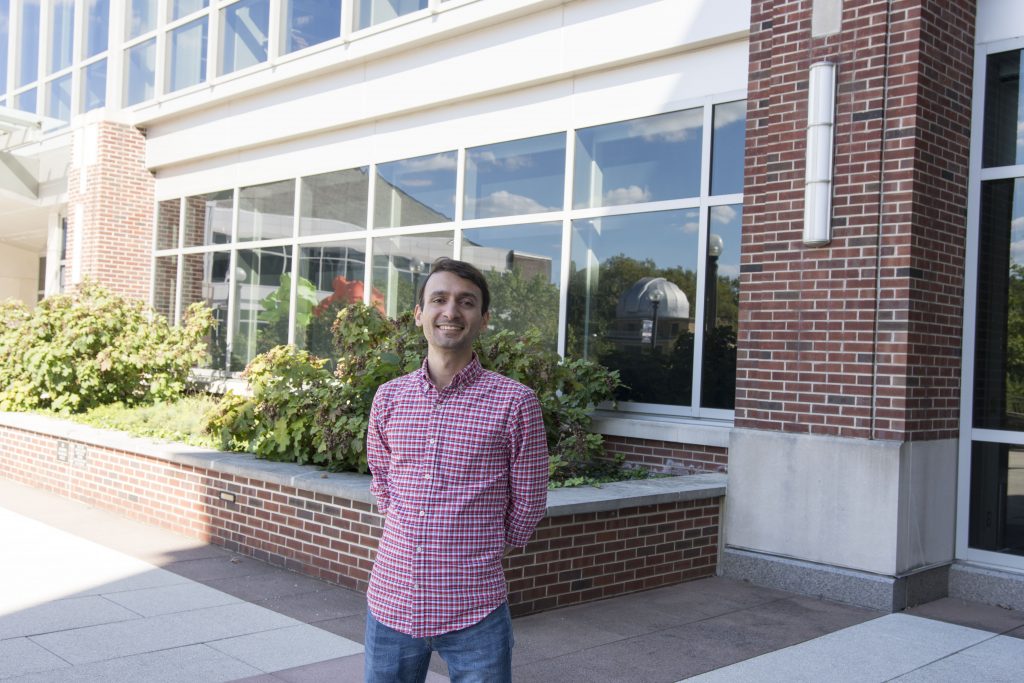 “The type of catalysts we use might be found commercially in the market,” he says. “But if you want to optimize your structure, you have to be able to make them in the lab.”

His second objective is to test the catalysts’ performance in the context of real reactions. Using a reactor, he assesses the catalysts’ behavior under a variety of conditions (varying degrees of pressure, temperature, etc.) to quantify how they impact the rate and selectivity of reactions. Ultimately, these tests determine which catalysts are the most effective at producing large volumes of high-value products.

Although the majority of Ghorbanpour’s day-to-day work is completed individually, one of his favorite things about his research team is its cohesiveness:

“The collaborative nature of this project is great,” he says. “I can familiarize myself with very different techniques that other researchers have, answer some questions, and compare all of our results for our common goal.”

The goal of using biomass as a source material for chemical production is one that Ghorbanpour heartily stands behind: He considers it a “necessity” that chemical processes are modified to be eco-friendly. However, one of the project’s more formidable obstacles is the issue of economic viability.

He emphasizes the importance of holistic sustainability, stressing that while biologically derived chemicals must be cutting-edge in terms of function, they must be financially competitive as well.

“To some extent,” he expresses with conviction, “that’s what sustainability means.”

Ghorbanpour’s passion for green chemistry doesn’t end at work: His hobbies are largely centered around appreciating nature. When not in the lab, Ghorbanpour enjoys hiking, exploring the outdoors, and spending time with family and friends (who are spread across several states and countries!).

“If we succeed,“ Ghorbanpour says of his project with excitement, “then it will be a revolutionary change.”