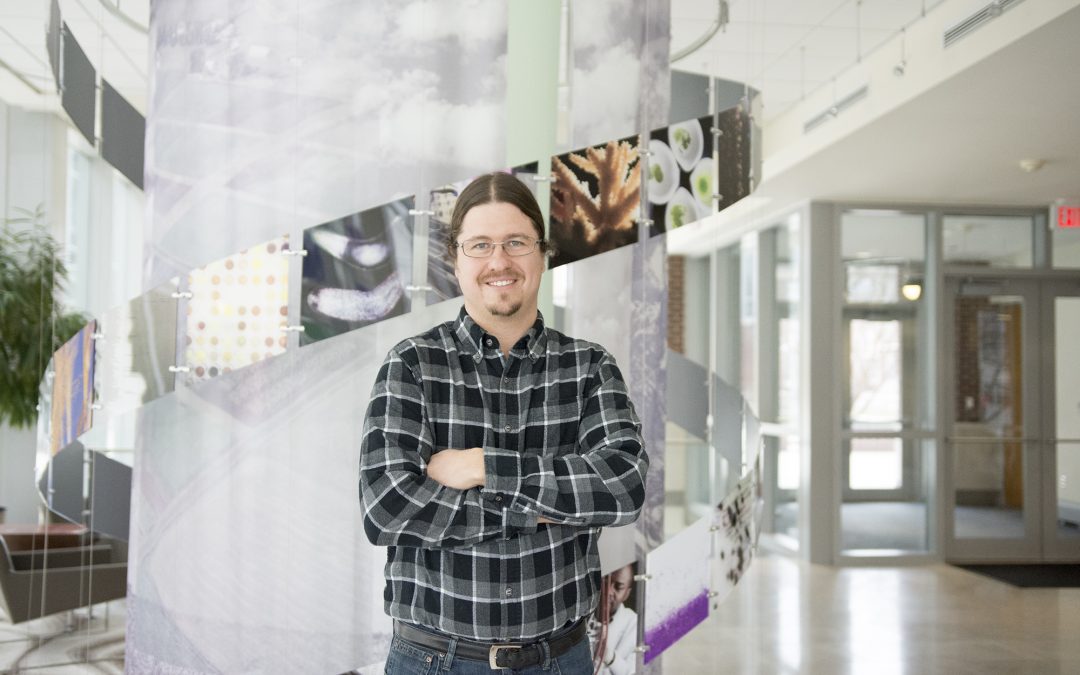 Growing up in Wisconsin, surrounded by cornfields, cows, and the lush Northwoods, inspired Adam von Haden to pursue Environmental Science as an undergraduate.

“Green Bay is situated with agriculture to the south and forests to the north. I spent a lot of time in the summer outdoors and camping,” said von Haden, now an Illinois postdoctoral researcher at the Institute for Sustainability, Energy, and Environment (iSEE). “Starting when I was 12, I worked at my uncle’s Christmas tree farm, and I’ve also worked at his apple orchard. It was a mix of agriculture and working outside. Most of my jobs have involved outdoor work.”

Von Haden’s curiosity for what’s in the ground — and how it impacts our planet — led him to move south to Illinois and work for the Center for Advanced Biofuel and Bioproducts Innovation (CABBI) in January 2018. He’s part of Evan DeLucia and Wendy Yang’s Sustainability Theme lab teams, marrying his passion for soils, vegetation, and computers to study greenhouse gases and crop nutrients. 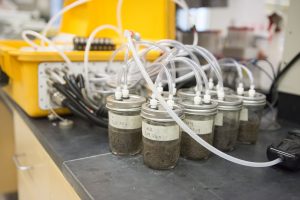 Though CABBI started von Haden working with crops he was less familiar with, like sorghum and Miscanthus, he’s no stranger to working within a Bioenergy Research Center. His Ph.D. research took place at the University of Wisconsin-Madison’s Great Lakes Bioenergy Research Center (GLBRC), also funded by the U.S. Department of Energy. His experience with bioenergy spans nearly 10 years.

“Moving to Illinois was the perfect transition for me. I was finishing up my Ph.D. when CABBI was just starting. It really worked out well for me because of my background,” von Haden said.

Now he spends a majority of his time at the Illinois Energy Farm, getting his hands dirty working in the field and within the soil.

“We take measurements of different plant and soil processes that either we don’t understand in general or that we don’t have enough information about for a specific crop,” he said. For example, the energy sorghum that growing now is fairly new; people haven’t grown it frequently in the past. “We don’t know how much biomass it produces and how much carbon these plants are storing, both above and below ground.”

His group is digging into unpaved territory by studying what is below the ground (like plant roots) instead of what is above ground when planting and growing crops. A majority of time is spent collecting data on soil and root samples.

“It’s so much more difficult to observe below ground. We look at how much carbon and nitrogen is in the roots so that we can determine how to scale that up to the field. In the end, we want to understand the fate of carbon and nitrogen — whether it is being stored in soils or lost to the atmosphere,” von Haden said.

The sorghum is treated and managed similarly to corn — a model for large-scale bioenergy production because of its well-studied and documented history. Not only is the Sustainability team mining the soil to extract information, but the researchers are also monitoring what is coming directly from the soil.

“We have a computer-automated system that continually samples the carbon dioxide flux from the soils where sorghum is planted,” von Haden said.

The group is intensively studying emissions from microbial decomposers within the ground and from the roots, which need to respire to keep themselves alive. These processes emit carbon dioxide — a greenhouse gas. 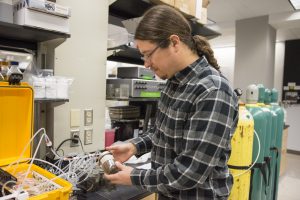 Data is collected, stored, and analyzed to better understand the usefulness and impact that these grasses will have on agricultural lands and the environment.

“It’s usually best to measure things in the field — especially when you’re trying to scale things up and have accurate models,” von Haden said.

Everything the team learns and records will be used as starting points for researchers creating different models at ecosystem and regional scales. The long-term goal is to create models that portray realistic scenarios of crop production as well as the environmental and economic implications of those crops.

All of this information will assist CABBI in pushing its innovative bioproduct mission forward. While von Haden admits some days can be long and tedious in the field, all of the knowledge gained will spur research in a positive direction.

Since moving to Illinois, he’s spent a majority of his time in crop fields, in the lab, and learning. But he’ll soon be headed south again. His next CABBI adventure involves visiting and collecting data at the Archbold Biological Station in Florida, one of the CABBI partners.

“We went down there and installed computer-automated equipment to study sugarcane, one of CABBI’s grasses,” he said. “We want to determine what the dominant land use — which is cattle grazing — looks like when it’s converted to bioenergy sugarcane (energycane) production.”