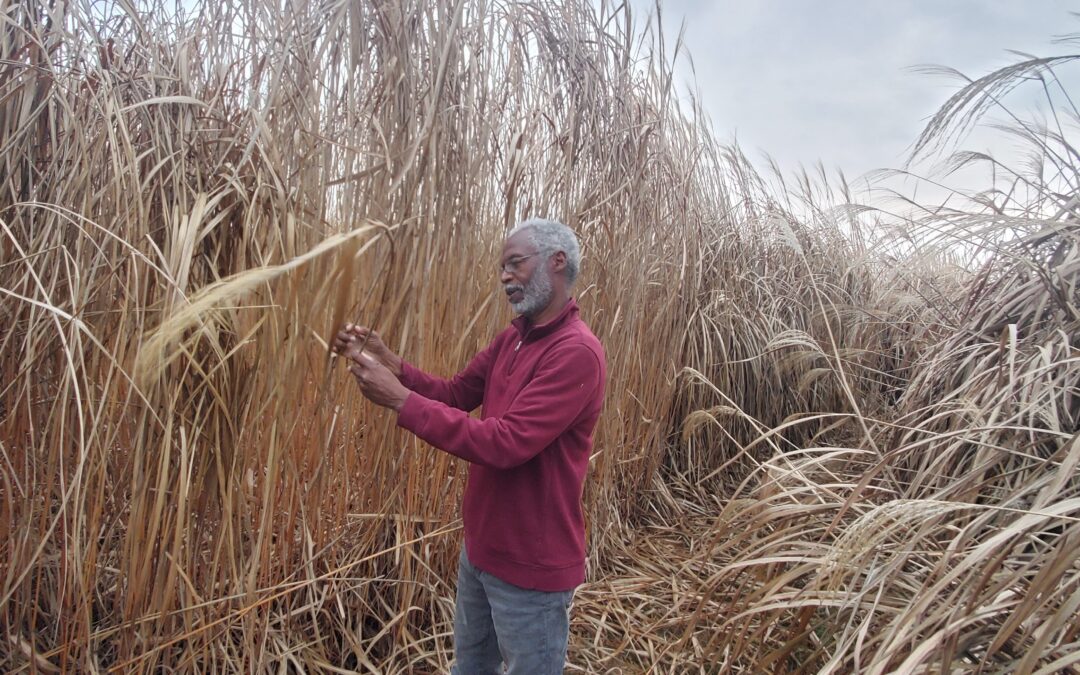 A Haitian-born agronomist who oversees a 970-acre agricultural research station at Alabama A&M University (AAMU) officially joined the Center for Advanced Bioenergy and Bioproducts Innovation in December — but he’s no stranger to CABBI research.

Cebert is thrilled to be one of six new PIs on the CABBI team — and to have his Historically Black university be a partner.

“Our membership in CABBI represents a major accomplishment for AAMU, being the first HBCU to be part of this prestigious organization,” Cebert said. “Besides helping us to build research capacity, it has opened many opportunities to expose our students to new areas of research that will address important issues facing the nation’s energy needs, while transitioning to a renewable and bio-based future.” 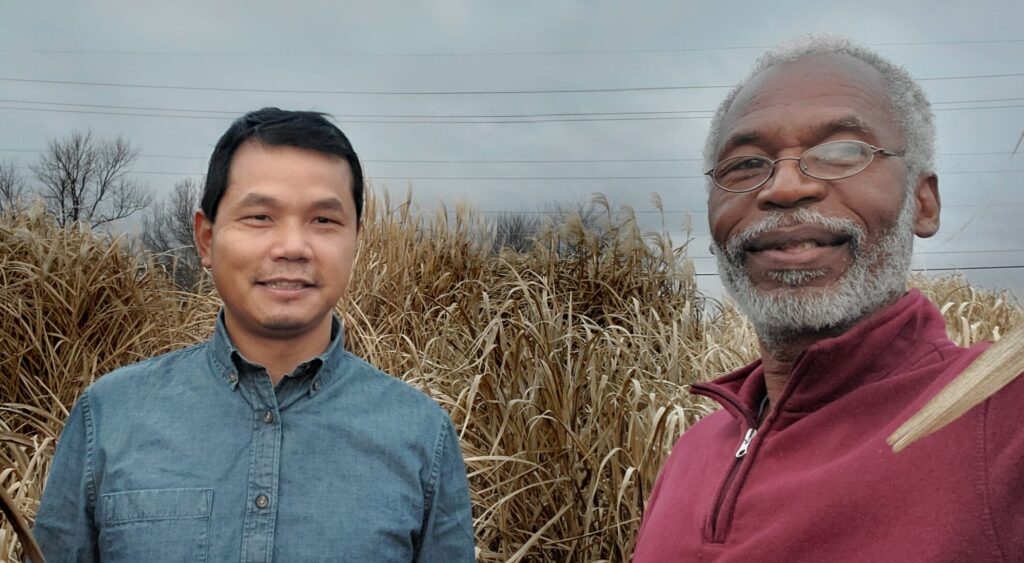 Cebert first connected with CABBI scientists in 2018, when researcher Kankshita Swaminathan reached out to Cebert looking for greenhouse space to grow miscanthus varieties for her genomics research at the HudsonAlpha Institute in Huntsville, Ala. She then discovered the ample land available at AAMU’s Winfred Thomas Agricultural Research Station just down the road.

Swaminathan, a CABBI Feedstock Production Deputy Theme Leader, invited CABBI miscanthus specialist Erik Sacks, Professor of Crop Sciences at the University of Illinois Urbana-Champaign, to visit her in Huntsville, and they asked Cebert to join their miscanthus project. Sacks sent him plants to grow at the research station, and “we’ve been expanding ever since,” Cebert said.

The unique climate of northern Alabama is a perfect testbed for miscanthus, a good “transition location” where both warm season and cool season grasses thrive, he said. The research station had plenty of room to house all the miscanthus populations that Sacks works with, some of which don’t grow well in Illinois winters. Essentially, Cebert is duplicating field trials at the Illinois Energy Farm, to test how the plants fare in warmer conditions. He’s also involved in breeding — using the southern climate to preserve germplasm and identifying plants that have good adaptation to the local climate and soil type.

“Ernie’s participation in the miscanthus breeding and field trials provided an additional location for replicating those trials, which was instrumental in identifying lines that were better adapted to the southern United States,” Swaminathan said. “We are excited to grow this partnership in CABBI.”

Cebert expanded on that work with a separate U.S. Department of Agriculture (USDA) grant to study the impact of recurring drought and other traits in northern Alabama on the miscanthus populations accumulating at the research station, to see how the plants deal with a lack of moisture or very high temperatures.

“We are going to lead the genetic mapping of drought tolerance in miscanthus,” said Cebert’s co-PI on that project, Xianyan “Justin” Kuang, Research Assistant Professor of Genetics at AAMU and a new CABBI team member.

They will observe the plants from early spring until harvest, then characterize their phenotypical, or visual, characteristics using both manual and drone-assisted phenotyping, to find any consistencies in their response over time based on climate conditions. Eventually they will correlate all of that information with genomic data developed by Sacks and Swaminathan — building on their pioneering work on the miscanthus genome. The phenotyping combined with genomic data will allow researchers to identify markers and candidate genes responsible for drought tolerance.

In addition to their work with miscanthus, Cebert and Kuang are part of a CABBI sugarcane project that includes research geneticist Anna Hale of USDA Agricultural Research Service in Houma, Louisiana, and Brian Baldwin, Professor of Plant and Soil Sciences at Mississippi State University. In early November, Kuang brought nine types of cold-tolerant sugarcane back from the Mississippi site see how they perform in northern Alabama, and whether they can survive the colder winter.

Cebert and Kuang will also collaborate on a CABBI project using drones, 3-D imaging, and machine learning to expedite the phenotyping of bioenergy crops, a powerful new approach developed by Leakey, Sacks, and others at CABBI to address a bottleneck in the breeding process.

“They’re looking at larger-scale types of systems, but we want to squeeze it down to a plot-scale system — 60 square feet or less, as opposed to kilometers,” Cebert said.

Cebert coordinates all research activities at the AAMU Agricultural Research Station, which include work on crops, soil, forestry, animal science (cattle, goats, and sheep), and fisheries. He also has his own genetics and breeding research team, co-led by Kuang, which focuses primarily on production, phenotyping, breeding, and genetic analysis of multiple crops, such as industrial hemp and sorghum. As with the CABBI projects, most of that work involves collaborations with other institutions.

“We are thrilled to have Ernie and his team at Alabama A&M join CABBI,” Leakey said. “They bring valuable expertise in crop breeding and genetics, especially with respect to the grass feedstock crops that are the focus of our research. I am personally excited about learning from them as we work together to develop and apply cutting-edge high throughput phenotyping technologies exploiting remote sensing from unmanned aerial vehicles and satellites. Ernie will also contribute in important ways to RISE (Research Internship in Sustainable Bioenergy), our internship program that supports students from underrepresented minorities in paid summer internships at CABBI institutions.”

Cebert is hoping the CABBI partnership will encourage more AAMU students to study plant and soil science. One of his students, Joshua Stanley, already participated in RISE on a project with Swaminathan. “We have a responsibility to recruit students into these programs,” Cebert said. 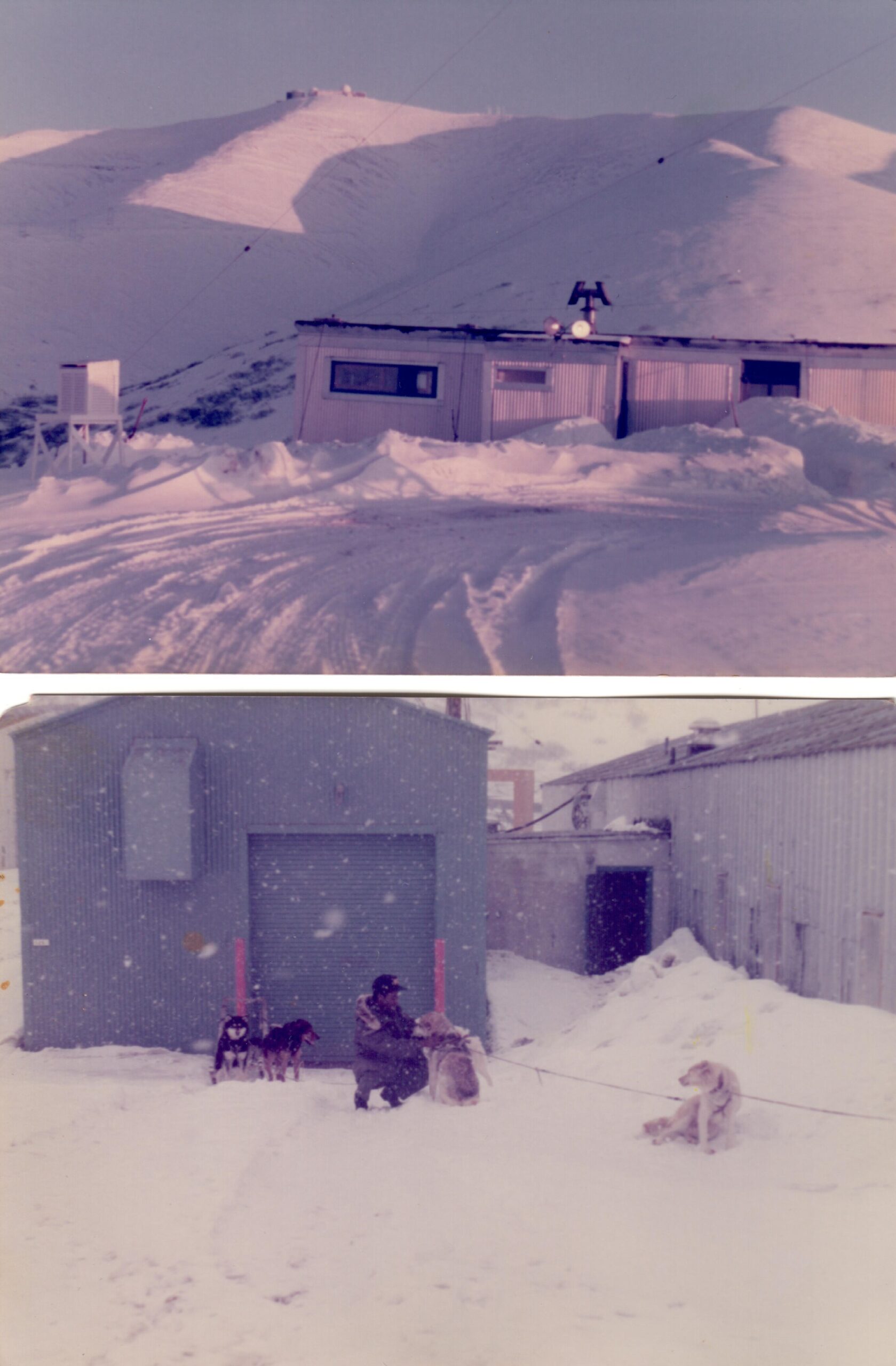 Cebert works at a remote weather station in Alaska during his stint in the U.S. Air Force. Credit: Cebert

His own path to a science career began in Port-au-Prince, Haiti, where he lived until age 13 when his family migrated to the United States in December 1967. His father was well-educated in Haiti, a country often seen as the poorest in the Western Hemisphere but also the first to have free black citizens after a successful revolution by former slaves, he said. Facing a language barrier and limited job opportunities for Black Americans in the 1960s, Cebert’s father ended up working as a carpenter in the U.S., but he never stopped emphasizing the importance of education to his children.

The family settled in Stamford, Conn., which took some adjustment after growing up on a tropical Caribbean island.

“I didn’t know there could be such cold,” he said. “The only English I knew was, ‘Good morning, how are you, I am fine, thank you.’ My sister and I learned English quickly because we only had American friends to play with.”

After graduating from J.M. Wright Technical High School, Cebert passed up a college soccer scholarship to join the U.S. Air Force, feeling he wasn’t ready for college. After training at Chanute Air Force Base in Rantoul — just 15 miles from the University of Illinois campus — he served for six years as a Weather Specialist, including in Alaska and Germany. Curiously, Cebert developed his interest in agriculture at a remote radar station in Alaska, where there was little to do but read from a well-stocked library

“I read many books about history and the conditions in developing countries. The common theme in the struggle of these countries was the lack of food security,” he said. “Not knowing anything about agriculture, and while in the middle of nowhere surrounded by snow and ice, I decided to study agriculture. I was young and naïve, and thought, ‘I can make a difference.’ ”

After leaving the Air Force, Cebert enrolled at AAMU, where he earned bachelor’s and master’s degrees in Plant and Soil Science, concentrating on plant breeding and genetics.

He later was accepted to a Ph.D. program in Agronomy at Purdue University, where he worked under the tutelage of famed agronomists Herbert Ohm and Fred Patterson in wheat breeding for Hessian fly resistance. He worked for another two years at Purdue’s New Crops program with Director Jules Janick and Professor James Simon.

Cebert returned to AAMU in 1998 to join the faculty of the Plant and Soil Science Program in the Department of Biological and Environmental Sciences, where his work has focused on winter canola and biofuels from waste products. 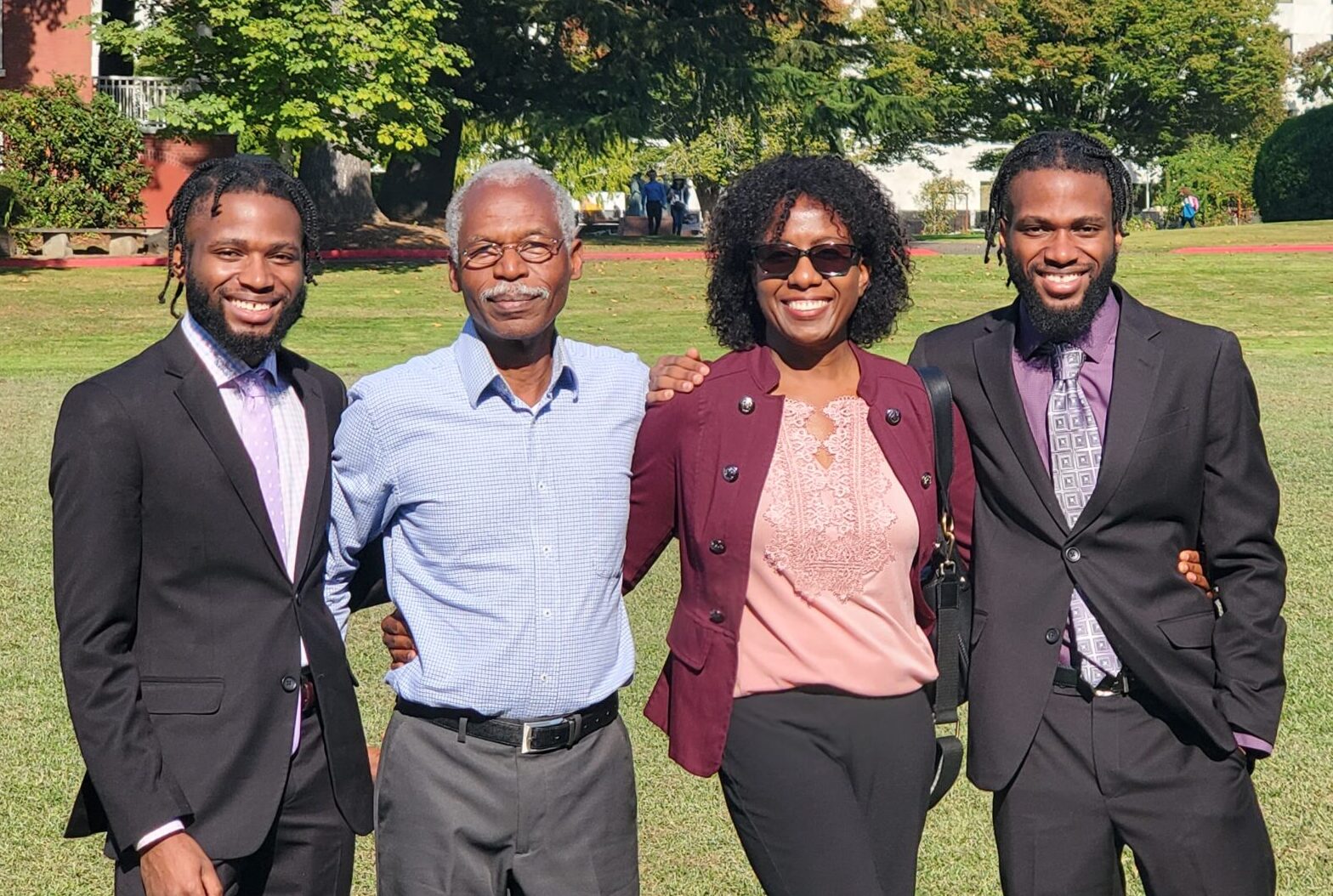 Ernst Cebert and his wife, Rhona, with twin sons Mark, left, and Michael, right, at their swearing-in for the Oregon Bar. Credit: Cebert family

The Cebert family’s regard for education is evident in its family tree. One of his five sisters worked for President Barack Obama; another earned a Ph.D. in reproductive health and teaches at Yale School of Nursing, and another is a physician — as is Cebert’s daughter. He proudly displays a photo of his twin sons, Mark and Michael, being sworn in as lawyers after passing the bar exam, giving all the credit to his wife Rhona, who teaches at AAMU’s Department of Family and Consumer Sciences.

For Kuang, Cebert is an “inspiration. I take him as my mentor in research and family as well.”

Kuang joined AAMU five years ago and Cebert’s team a year later. After completing his undergraduate degree in Agronomy and master’s in Plant Genetics and Breeding in China, he earned a Ph.D. in Genetics followed by a master’s in Bioinformatics at Iowa State University. There he met CABBI plant genetic specialist Dan Voytas, who was a mentor to Kuang, a member of his Ph.D. committee, and co-adviser for his Ph.D. project.

Cebert and Kuang are excited about the global potential of the CABBI research partnership.

“Climate change is causing catastrophic events around the world, resulting in human suffering that often remains unseen,” Cebert said. “Drought and other extreme weather events this past summer have resulted in failed crops in China, dried-up grazing land in Africa, flooding in Pakistan, historically low water levels, fires in the western United States, and record human deaths in European countries.

“In a post-Green Revolution world, with new technologies such as CRISPR and other new tools being tested regularly, it’s up to this current generation to create, establish, and implement the next revolution, a sustainable bio-based future so our children and their children will know that we did not fail them.”